The Great Pumpkin gets Hammered!

What do you do with pumpkins after Halloween is over? We got this idea from Jude's school -- let the kids pound golf tees into the pumpkins. Jude thought this was a blast. Here are a couple pics and a video of the activity.

Note that we didn't get around to carving these pumpkins.  We did carve one.  We had planned to carve all three but Indi was sick this week. 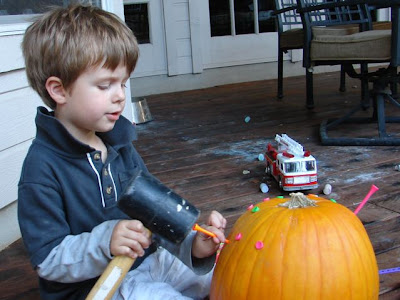 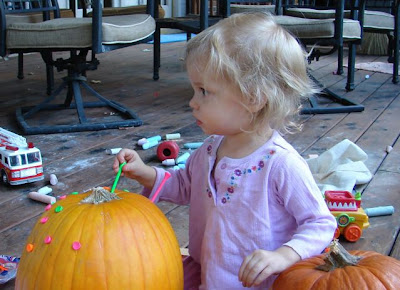 A carpenter in the making

Like last Halloween, we were left wondering what to do with all of the candy.  We didn't want the kids to eat it all nor did we want to eat it.  So we started a new tradition. Tonight the kids will leave all of their candy at the front door. The Great Giant Pumpkin will then take their candy in exchange for a small gift. The kids get to keep their five favorite pieces and the rest go to the Great Giant Pumpkin. They're pretty excited about it!
Since this is a quasi-made up tradition we don't have all the details down yet.  Jude, for example, asked if Indi could get a small puppy from the Great Giant Pumpkin (Hereafter GGP).  Trapped, Dan said, "Well, he can't carry a puppy because pumpkins don't have thumbs."
Jude's come back, "Then how will he eat candy if he doesn't have thumbs."
"He must tip himself over, dump out the toys and shovel in the candy, Jude," I said.
Jude still looked puzzled but Dan had my back.  "That's right buddy.  We don't actually know very much about the GGP.  No one has ever seen him."
That seemed to work.  What are we going to do when they are teenagers and we can't use things like the GGP and Santa Clause to get our way?