well, i am officially finished with my Christmas crafts. these pants were supposed to be my practice pants (my THIRD pair of practice pants!), but it took too much time so they will be the pants i give indi for christmas. 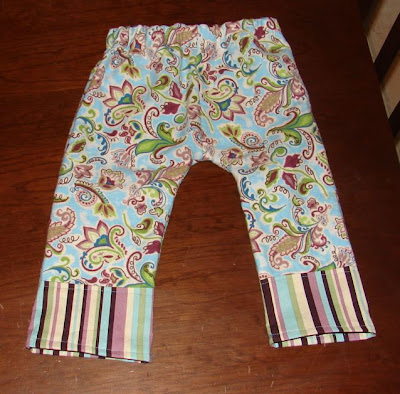 so here's the story on the pants.  i made the first pair of practice pants according to the manufacturer's pattern/instructions, but it was WRONG!!!  i couldn't believe it!  [i decided to use a basic pants pattern that i own rather than the Make Baby Stuff website pattern.]  despite the fact that the pattern was wrong, i made some adjustments and couldn't wait to try them on indigo this morning.  they turned out to be a wee bit small.  i could barely get them over her hips (without elastic) and without being hemmed, they were too short! 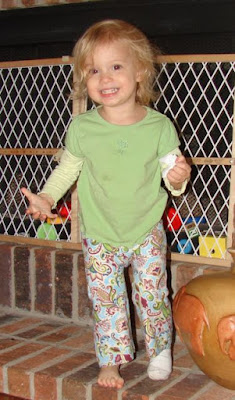 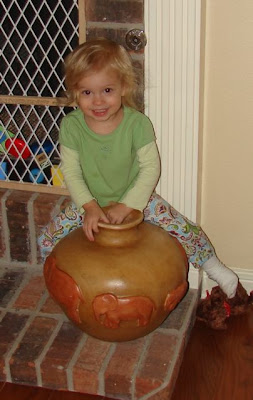 i made a second tiny pair of practice pants, again, according to the pattern, to see if i did something wrong, or if it was the pattern that was wrong.  it was the pattern.  so in order to get this pair of pants (first pic), i had to make my own pattern (!) -- kind of tricky for a novice!  if you look closely, you'll see that the flowers point down on one side and up on the other.  also one leg's slightly wider than the other.  but, hey, that's what makes them unique (?) or this is what i tell myself!
we also finished the doll.  dan embroidered the face.  i would highly recommend doing the embroidery BEFORE stuffing the doll. 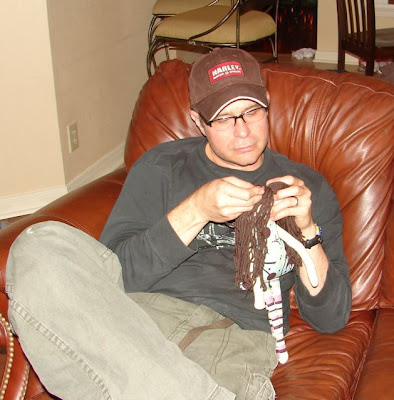 isn't that too sweet?
without further ado...  and seriously, you guys, i am NOT a good seamstress.  any one of you could do this.  trust me.  this is like baby beginner stuff. 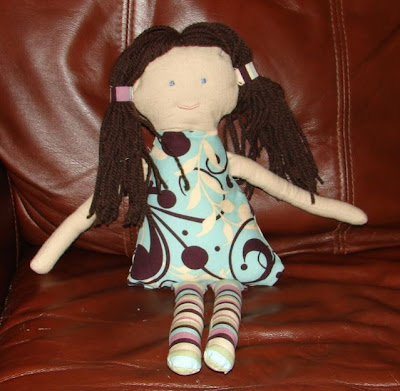 next we will be on to making wooden toys.  i get to be dan's tool girl.  i was thinking next year we should probably start on this stuff BEFORE december.  but that would involve planning which would take all of the fun out of last minute rush projects!