Frustrated. Powerless. Tied hands.
I gotta be honest, this is how I'm feeling about this 'post-referral-hurry-up-and-wait' phase of our adoption. We had hoped to receive our court date last week, but, alas, we are still waiting. We were hoping to travel by Christmas and that is now logistically impossible. We were hoping to have Evangeline examined last week by a third party physician, but despite our attempts to call and email her, we've heard nothing.
I try not to be a whiner, but boy, it is so hard to be here waiting and wondering. I am told "no news is good news" - that this means E is well. And it's only been a month since we received our referral. But this waiting is tough, especially now that we know we won't be traveling in December. When I was holding onto that possibility, it somehow made the waiting more manageable.
As I wait, I have been sewing. I just finished an advent calendar, which is being quilted by the director of Jude's preschool.
And speaking of sewing (sort of) I've mentioned before that organization is not my strong point. In case you thought I was exaggerating, I have proof. I took these photos of my sewing table a few weeks ago when I was working on Indigo's jacket. For some reason, I couldn't find my scissors. Hmmm... 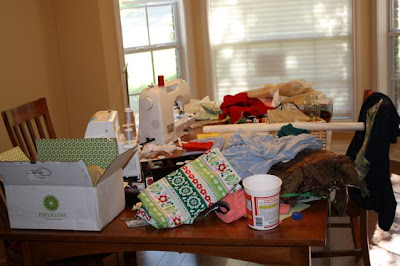 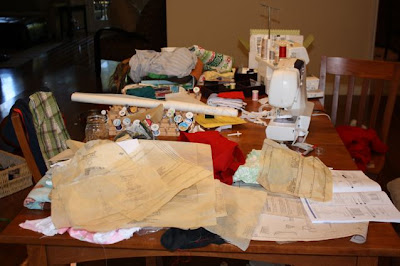 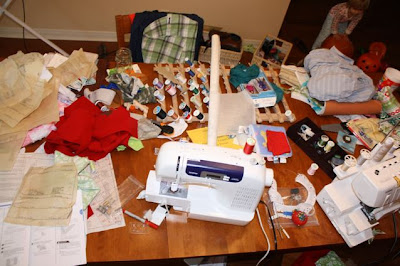 True story about how disorganized that I am. When I was putting together Evangeline's care package, I had some pictures of our family printed at CVS to put in her photo book. When I got home I set the pictures somewhere and (of course) could not remember where. I looked everywhere with no luck, so I got Dan to join in on the fun. We actually went through the trash in case I had accidentally thrown them away. I started going through the trash when Dan said (in all seriousness), "No, let me. I'm a pro at going through the trash."
Um, you are?
So he put on some latex gloves (major loss of street cred there!) and dug through.
Nope, they weren't in there.
Finally, as a last resort, I decided to check the last possible place where I might have put them - with our adoption stuff. You see, doing that would mean I was organized, and remember, I am not organized. As it turns out, that day I was and there they were with all of our adoption paperwork. If I would have been my regular disorganized self and haphazardly thrown them on the table or countertop, I would have found them much sooner.
Lesson learned.