Of Tonsils, Gingerbread and Hair... (By Dan)

It has been an interesting week at our house.  We've had outpatient surgery, Christmas time sweets and hair-dos.  Naturally, not all at the same time, but sometimes your week ends up more like an eclectic play list of family activities, rather than a well orchestrated symphony.
Below is the face of misery.  Jude had his adenoids and tonsils taken out last Thursday, so he's four days into his uncomfortable recovery.  The surgeon was really great and he let Jude take "Little Donkey" into surgery with him.  When they wheeled him away it was a little hard to see my wonderful, brave little boy on this big gurney, with an oversize hair net on his head going through the double doors of the surgical area.  Thank goodness it was only a minor procedure. 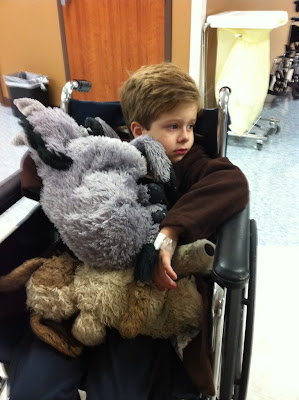 Heading home.
Winter is here.  Ok, I can't be too melodramatic because it is South Central TX, but for us, 40-50 degrees is cold.  So that called for a family video afternoon. 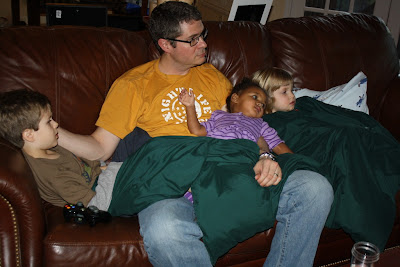 It's not often I get to snuggle with all three kids under a blanket. 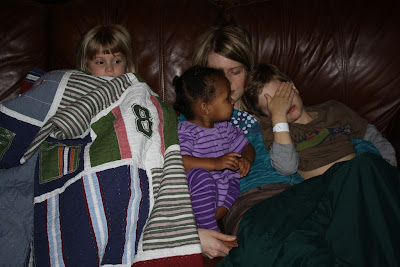 Jude covered his eyes because of the flash.  This was less than 24 hours post-surgery, so he was a little tender.
After Jude came out of his haze, he wanted to build a gingerbread house kit that Rachel had picked up.  I 'glued' it together with icing and the kids decorated it with candy. 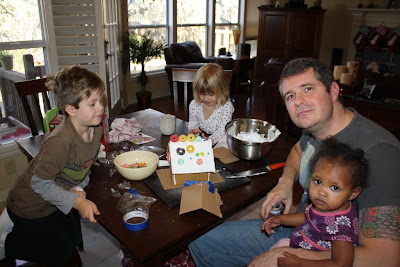 Here we are about half way done with the roof.
The next day, with Jude, Indi and Rachel tucked away in our bed watching a few more videos and Rachel working on a craft, it was time for a few errands.  Evie and I hit the town. While we were at the library, one of Evie's hair bands broke and rather than run to the store with her hair sort of wonky, I found an African American hair salon and they put her hair up into a really nice 'do'.  Plus they taught me how to replicate it, which I did this morning. 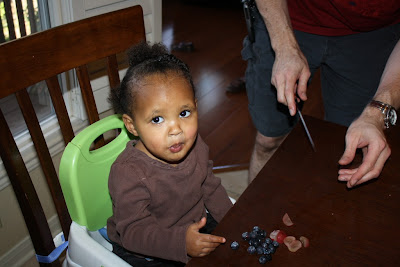 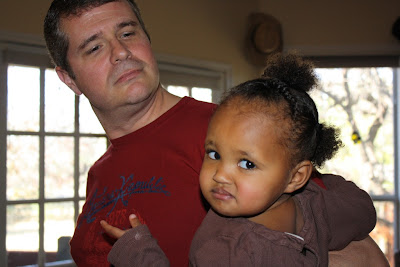 One more of her highness.
Poor Indigo has had to stand by while her brother gets all his post surgery attention and then Evie came back home with her devastatingly cute hair do, so she wanted some love. 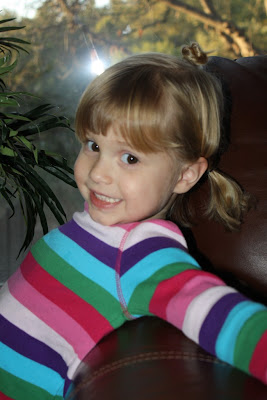 Presenting Indigo's fancy hair do.
And once again there was balance in the Force.
Peace out.