For those of us who sew, sewing for boys can be a bit of a challenge.  The challenge only grows as the boy grows.  There are lots of cute toddler patterns for boys, but most would be too "babyish" - according to my 6 1/2 year old.   His wardrobe pretty much consists of T-shirts and shorts or pants.  Customized T-shirts using appliques or stencils and fabric paints are a fun and easy project for boys.  But it's harder to get as creative with pants and shorts (like you can with girls' dresses and skirts), without crossing over into 'babyish' territory.

For several years, I had been eying this Oliver + S pants pattern (now out of print but still available here).  Yet I was never inspired enough to buy it.  But Jude's been growing out of most of his pants.  Meanwhile we've been learning more about the way clothes sold in many department stores are made... and growing increasingly uncomfortable with that process.  [That's another post for another day, but some great places to start are here and here and here.]

With that in mind, when I saw all of this great inspiration here, it was just the nudge I needed to purchase this pattern.  It's unisex so I know I'll get a lot of use out of it. 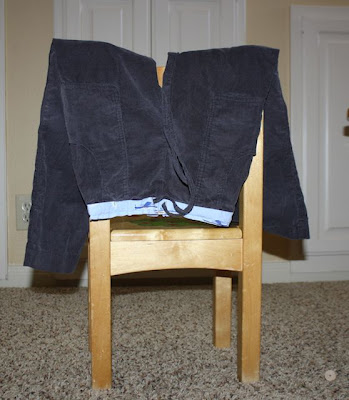 Jude requested airplane fabric for the waistband, which made me smile.   Even though he sees himself as such a big boy, especially in comparison to his younger sisters, he's not yet too grown up for airplanes.

Jude liked giving me his input on his pants, though I don't think he liked trying them on so many times to get the right fit.    "Again, Mom?!"  Exasperated sigh. 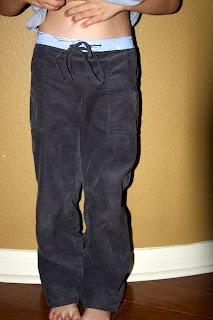 I took the pants in about a 1/2 inch on the inner leg seams.  They were just a little too wide otherwise. 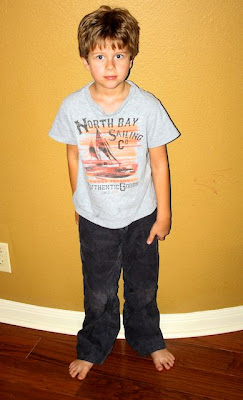 Goodness, this boy is growing up so fast!  All of my reminding him to slow down on the growing up seems to be rubbing off on him.  Yesterday he told me, "Mom, Evie's getting so big and I don't want her to grow up."  He then trailed off, nostalgically saying,  "I'll always remember her as my little munchkin."  Where in the world did he get that from?  Ahem.  I will admit, though, that having an oldest as nurturing and voluntarily helpful as Jude is truly a blessing!