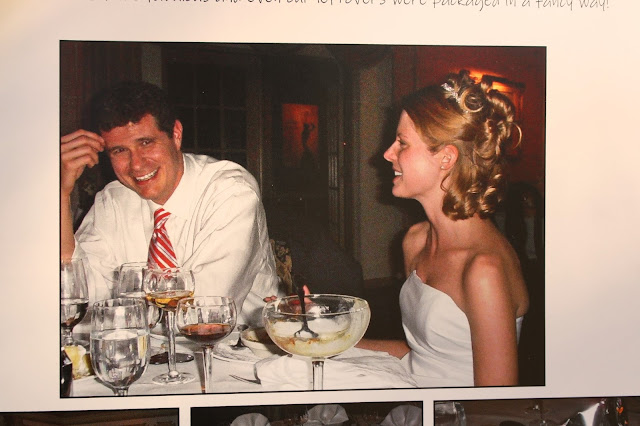 Eight years ago today, after dating for a mere six months (and throwing together a wedding in two weeks!) Dan and I quasi-eloped in Florida with only immediate family in attendance.  Eight years later, I am even more amazed and grateful to be his wife.

Dan is a man who can and does do anything.  He's a talented writer and a gifted photographer, both digital and on film, and has ever so patiently been teaching me how to shoot in manual.  As a musician, he can play drums, bass, a bit of guitar.  And when I bought him a ukelele after he received a promotion, he was playing songs like Soul Sister almost immediately.  Me, on the other hand?  I was still working on He's Got the Whole World in His Hands two days later.

Dan works with his hands.  From making small things around here to rebuilding our deck steps, he has it covered.  He can also fix just about anything.  With Jude as his shadow, many afternoons have been spent repairing things that need repairing.  His latest interest is painting.  After getting him set up with some painting basics for Christmas, Dan was at work at his new easel painting an African landscape.  Taken aback by the beauty of what he had created in a matter of minutes, I asked "You took art classes in high school, right?"  "Nope, this is my first time."  He responded.  Of course it is.  As I said, he can do anything.

A few more random facts - He grew up in West Africa, speaks some French, and can cook a delicious and creative meal without a recipe, or even a fully stocked pantry.  That's where the creative part comes in.  A friend of ours claims Dan is the most interesting man alive.  I can't say I disagree.

Yet it's his heart that really shines above it all.  His patient, kind, loving, generous heart.  Always there to listen, to support, to understand.  He works hard as a business executive by day, but at night, even after incredibly long days, he is fully present with me and the kids.   Always.

Last night I was reflecting on our eight years together.  On how blessed I am.  I found myself praying that each of our children would someday be equally blessed with an amazing spouse if they choose to go down this path of marriage and family.