An Oliver + S Hide and Seek Dress... Sort Of

I started out with grand intentions of recreating this dress that Kristin blogged about here. 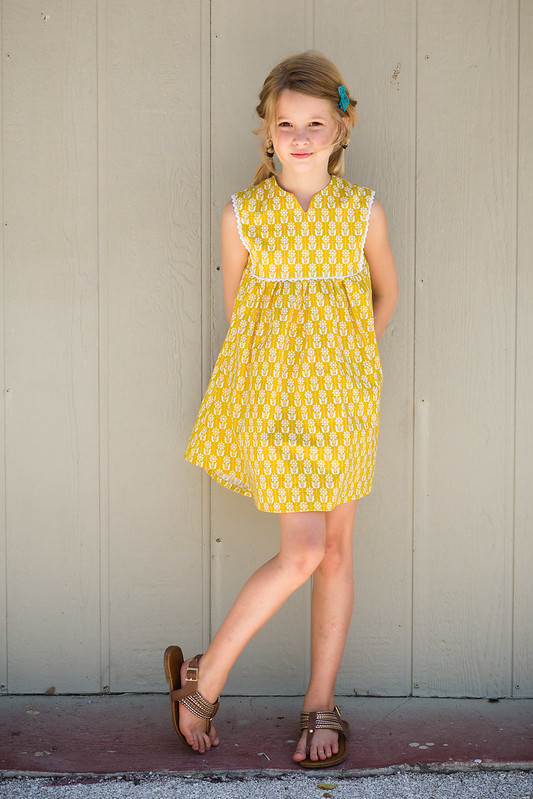 I loved the folksy feel of that dress and spent several hours altering the Hide and Seek pattern to match this dress, ruffle sleeves and all. 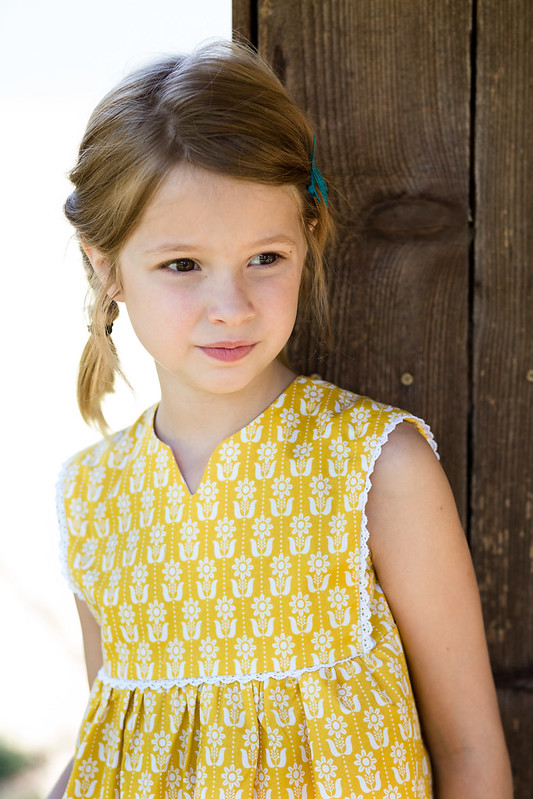 It was one of those wah-wah-wahhh moments where it looked great...  on the hanger but not on my girls. 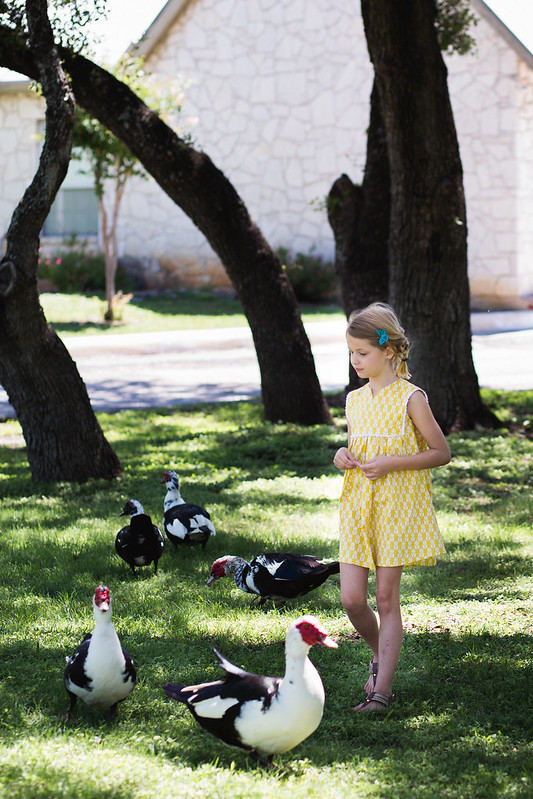 I actually made this dress for Tarikua but she was swimming in it.  I needed a Plan B.  So, I took off the sleeves, altered the bodice again and ended up with this for Indigo. 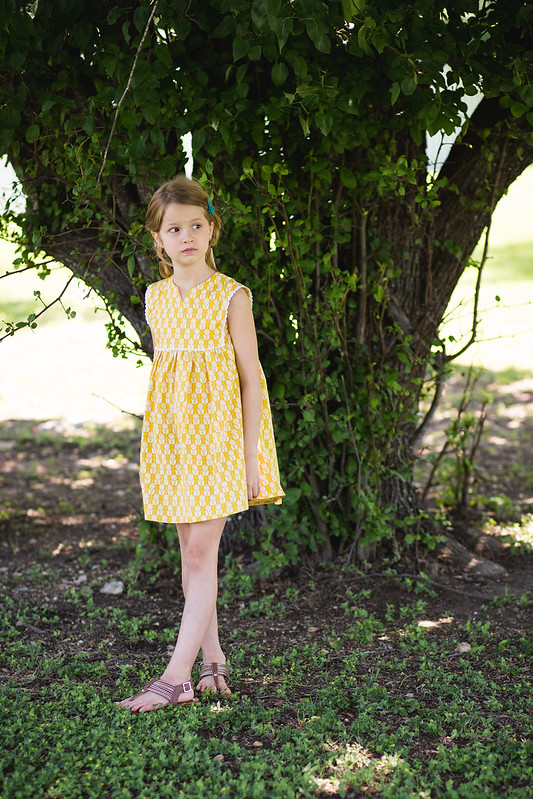 Perhaps I have a Vintage May hangover, because this dress feels distinctly vintage to me.  Kind of Cindy Brady-ish. 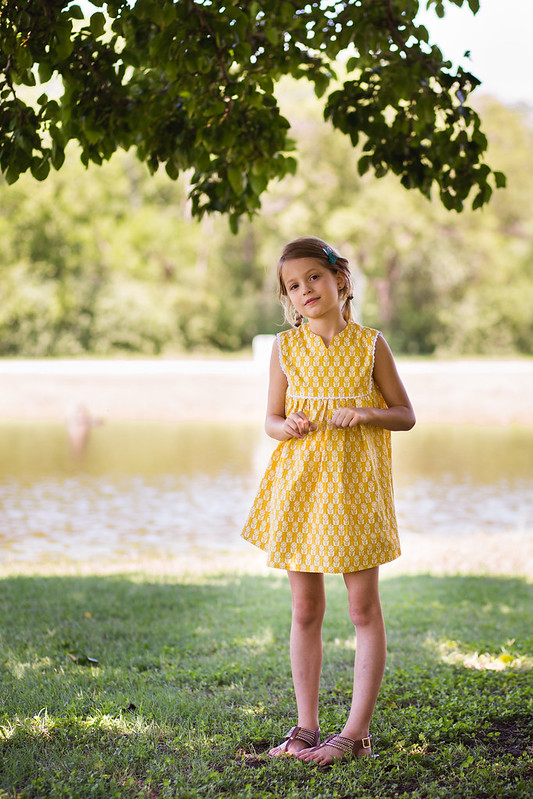 It's a little short - it's not going to fit for long.  In a way, I feel that adds to its vintage charm.  Have you ever noticed how short some of those 50's and 60's little girls' dresses are?  In our case, though, I'm envisioning it will be paired with leggings soon enough. 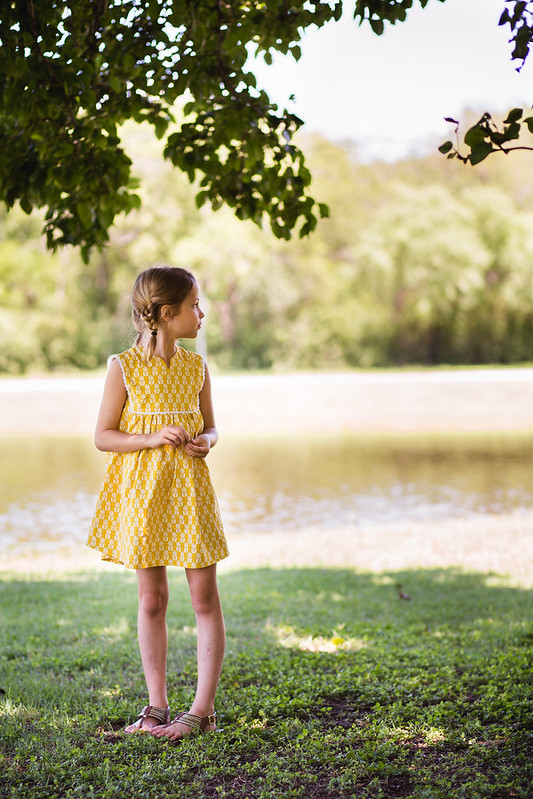 It was surprisingly tricky to trim out the yoke.  Ultimately, what I found worked best was to sew the lace until about 1/2" away from each end.  With the trim unattached, I could get it to lay exactly the way I wanted when I joined the bodice to the skirt. 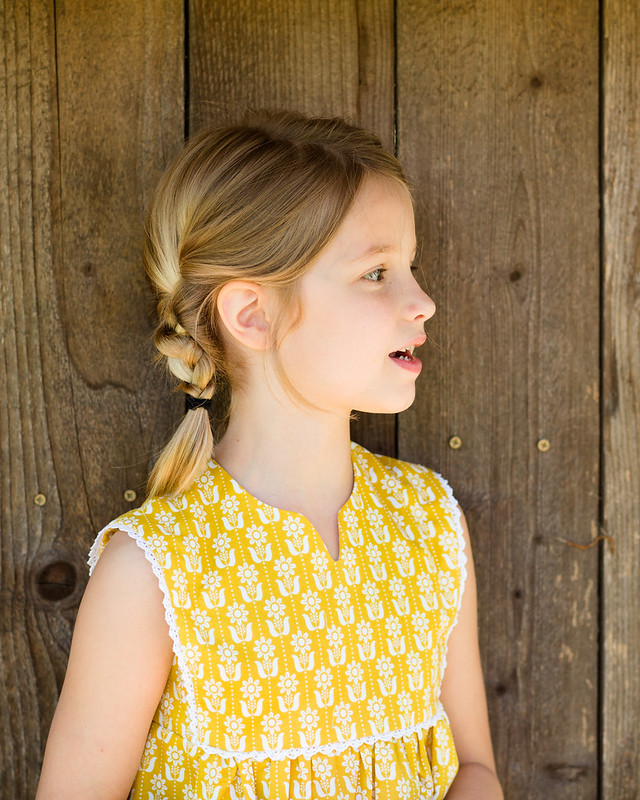 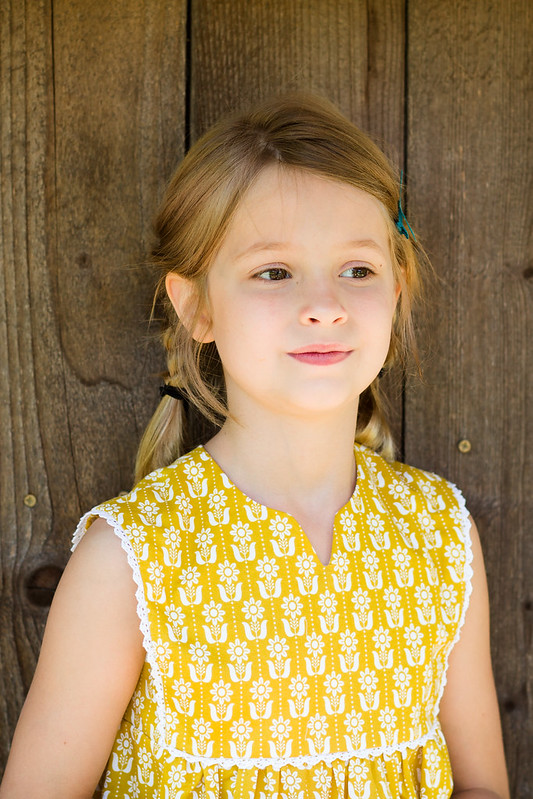 The fabric is Grey Abbey Organic Folky Daisy in Mustard. 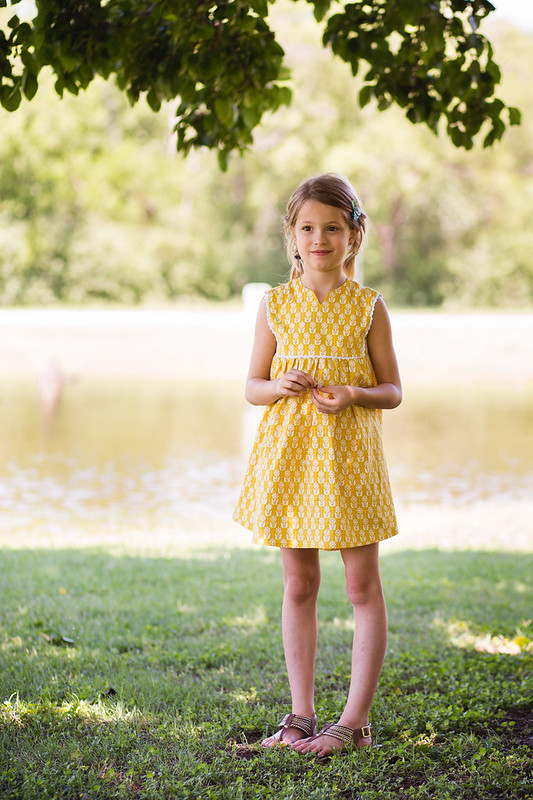 I finished the dress with three simple white buttons. 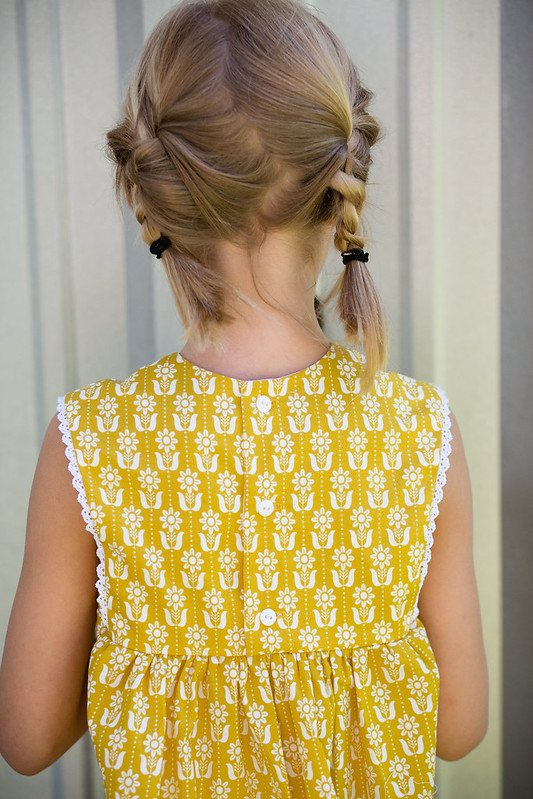 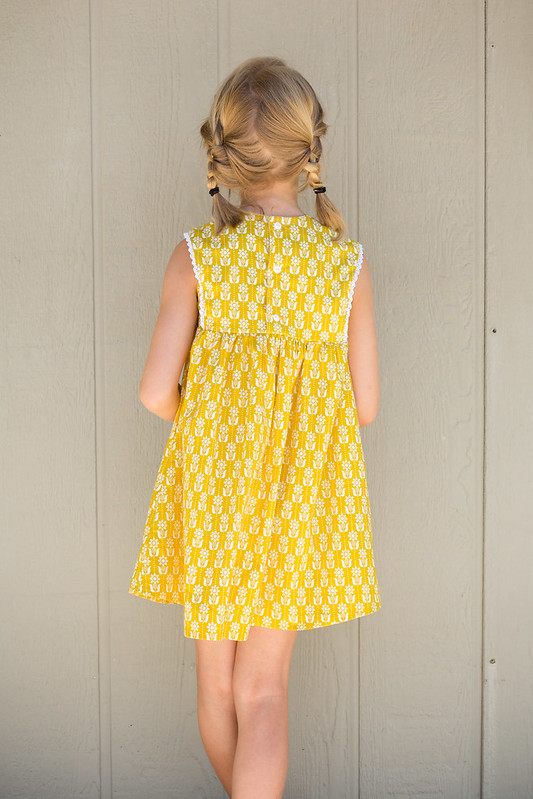 Altering patterns can be both frustrating and exhilarating.  This dress was heavy on the former, but ended with the latter.  All's well that ends well, I guess. ;) 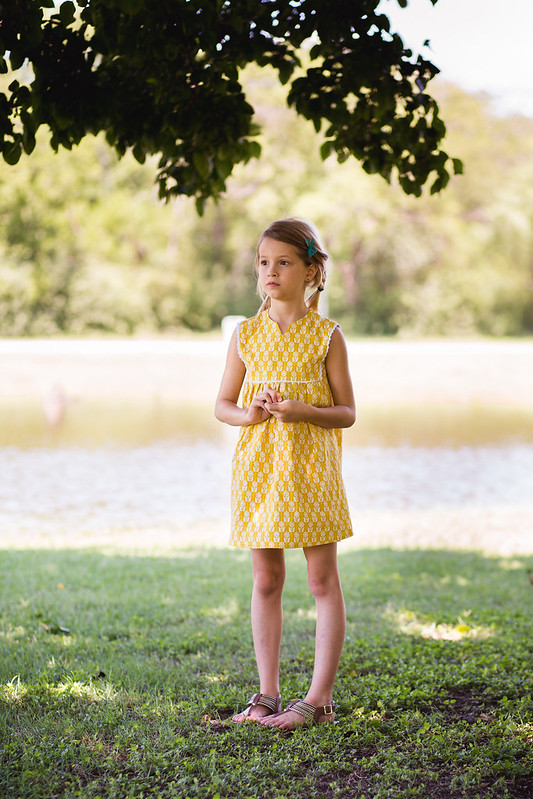 And unrelated to sewing - there is not a lot of photographic evidence of either Jude or me.  I don't sew a lot for either of us, and we both avoid having our photos taken whenever possible.  :)

But this past weekend was Jude's second piano recital so he complied and granted me permission to take photos of him.  :)   Every year, there is a competition for memorizing music in which the winner gets a trophy.  Most of the kids had been with our piano teacher since last May and Jude started in December.  So the other kids had 7 more months of memorization time than Jude.  He decided in February that he wanted to win the trophy, so he memorized 17 songs within only a few months!  I really couldn't believe it! 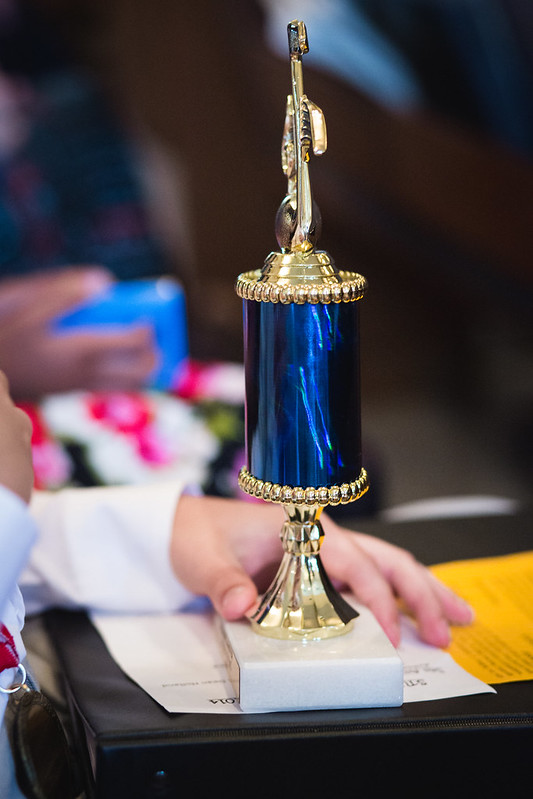 You should've seen his face when he accepted that trophy!  He also won a medal for "perfect practice" which meant he came prepared for every lesson.  Go Jude! 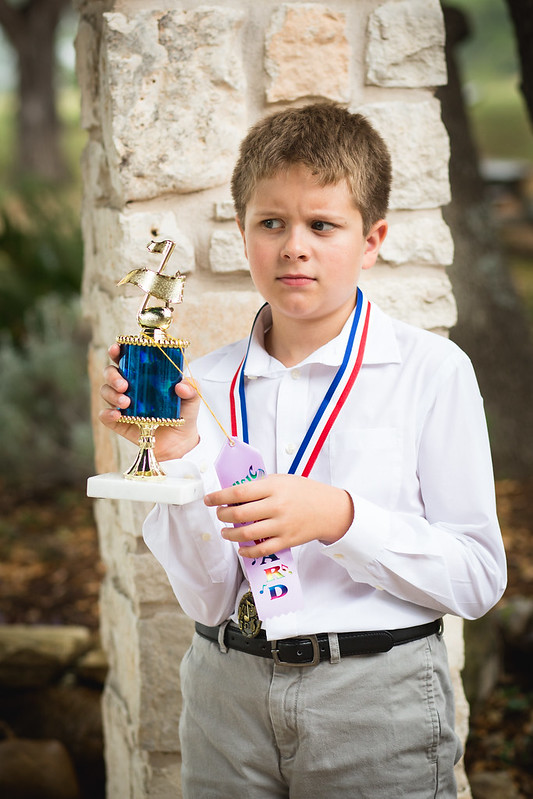 Suspicious of the camera - I feel ya, Jude!

The teacher said, "Let's all give our students a round of applause."  Jude leaned over and whispered to me, "I'm not going to clap for myself, Mom."  I nodded and said, "That's very humble of you, Jude!" with a wink. 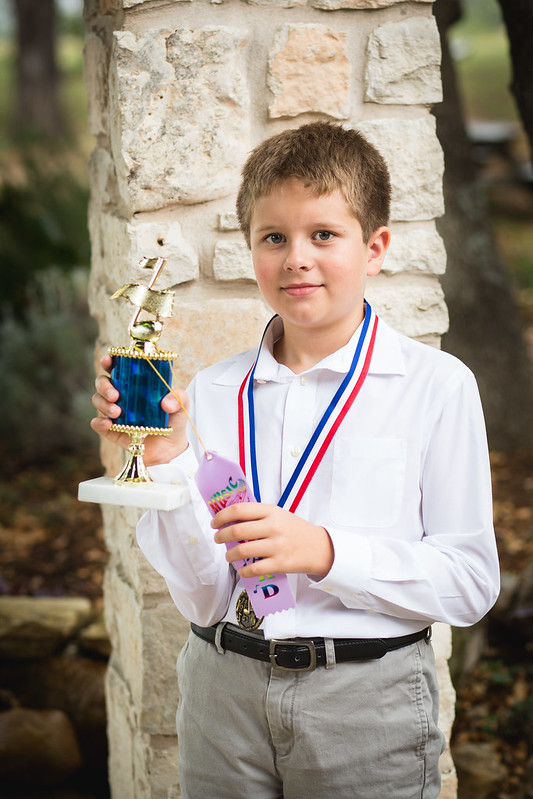 We're so proud of him!