Last week, I had my own personal kids clothes week.  I sewed an hour or so each day in order to crank out three Mini Briar Sweaters and three Mini Virginia Leggings for my girls.  At that time, it felt like I couldn't build up their winter wardrobe fast enough. 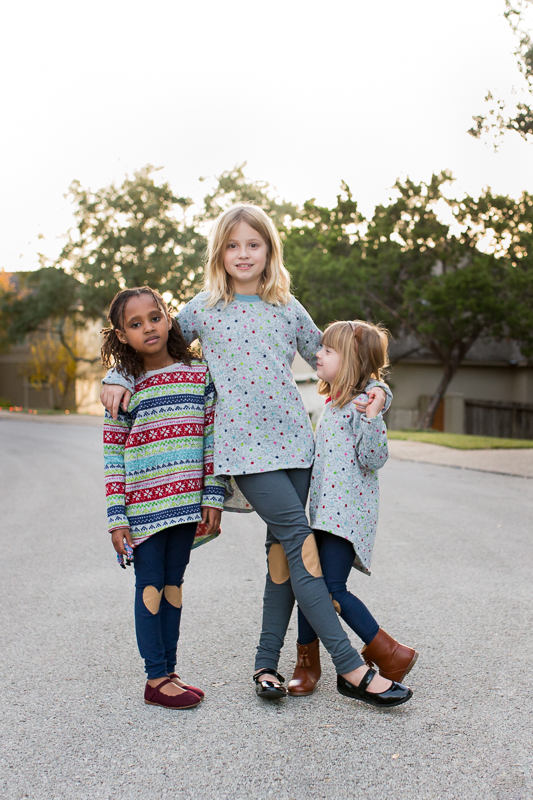 Of course this week, our weather was warm again.  The high for today was forecasted at nearly 80 degrees (about 27 degrees C).  But, you won't hear me complaining.  Having spent close to 25 years in the northern Midwest, I've had my fill (and then some) of frigid temperatures, blizzards and sub zero wind chills.  Now I'll take a green and balmy Christmas over a white one any day.  My husband likes to say, "No one has ever hurt their back shoveling sunshine."  :P 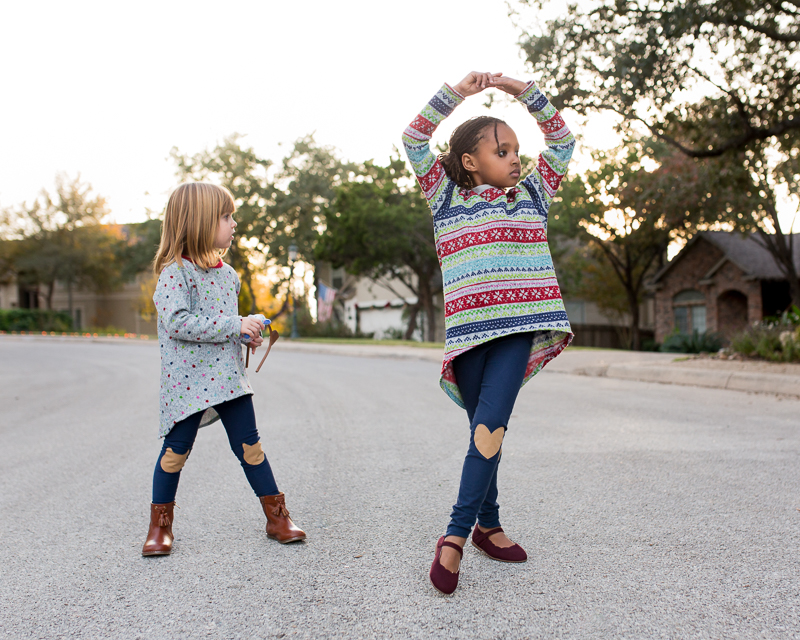 Still, we are supposed to have one of the coldest winters ahead since the 90s so I know these sweaters will get plenty of wear. 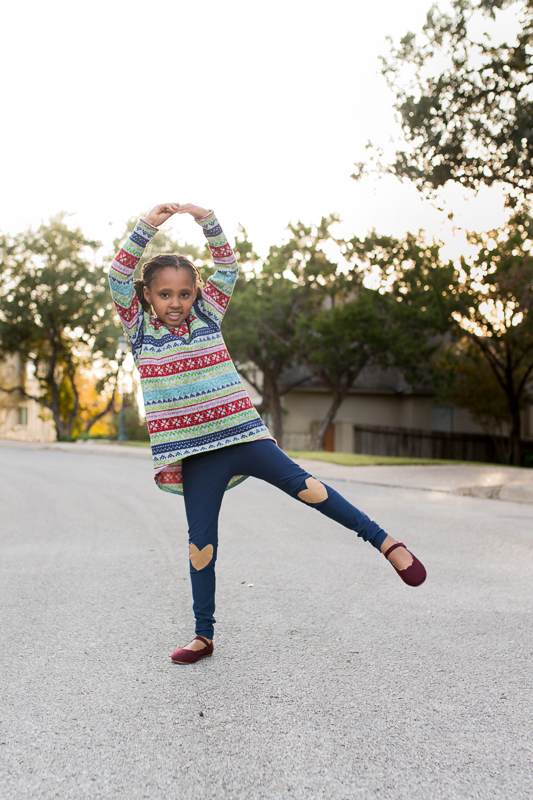 I had wanted to sew the Mini Briar top the moment I saw Kristin's version here.  A couple of days later, Megan Nielsen emailed me and asked if I would be interested in reviewing any of the patterns in her new children's collection.  The timing was perfect because I reeeally wanted to sew these patterns anyway. 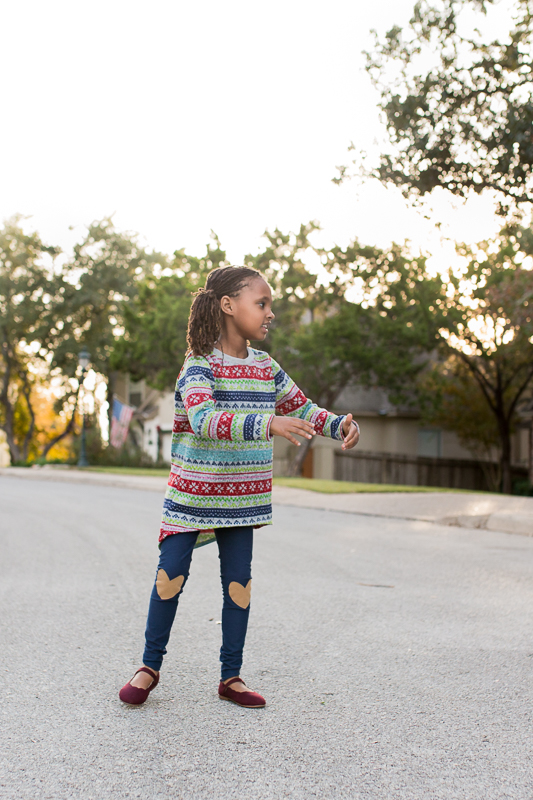 She was going to mail me the paper patterns but then I found this sweater fabric at JoAnns.   As soon as I got home, I emailed Meg and asked if she could email me the PDF versions instead because I wanted to get right to it.  And she did.  So, yeah, I was excited about these patterns!  ;) The fabric is a sweater knit on the front, but backed with fleece.  It's super cozy and my girls don't want to take these sweaters off.  I had planned to only make these tops for Tia and Indigo, but then Iris begged for one, too! 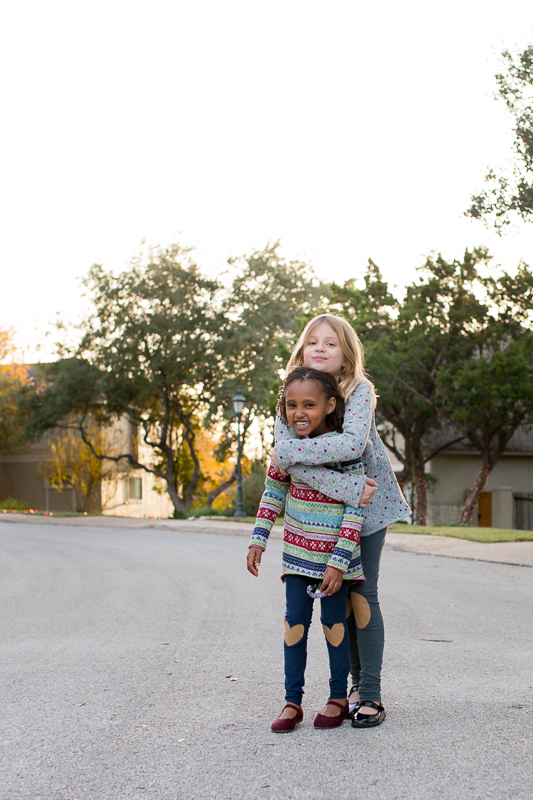 I always sew patterns based on my kids' measurements and never based on their ages or store bought clothing size.  For this pattern, all of my girls measured right around their age in the length but a size down in the chest measurement.  (That's pretty much the norm for them across most, if not all, patterns.) 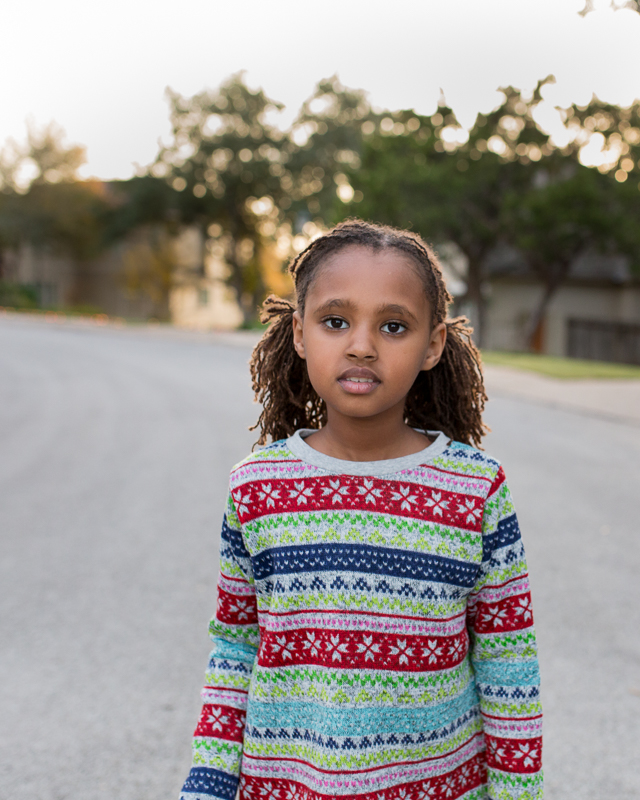 So I cut each pattern one size larger in length than in width.  Then I cut one size smaller still for the neckline, since I didn't want it to be too scooped.   That means for Tia I cut a size 6/7 in length, 4/5 in width and 2/3 at the neckline. 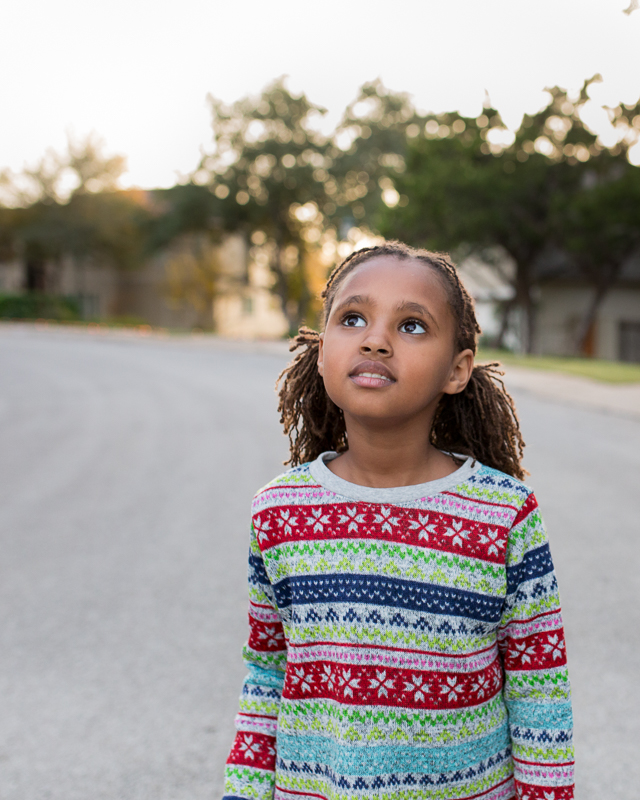 I love that there are so many options for this pattern.  There are four different versions of the top, and they print separately, too.  So be sure to only print the version you want to sew.  (I may or may not have taped together an entire pattern of the wrong version!)  There are also various elbow patch appliques as well as templates for appliques for the shirt itself.  This is one of those patterns you could sew a lot of times, in so many different ways. 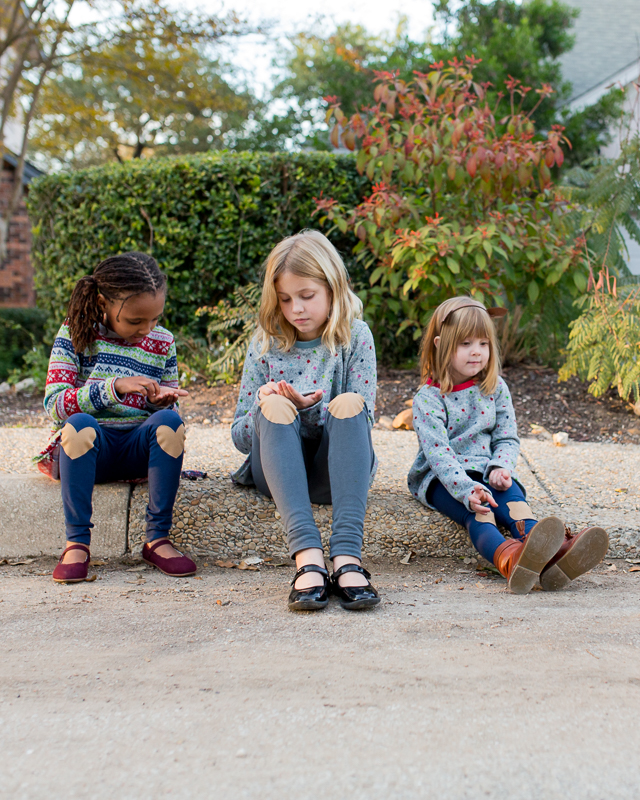 I wanted the top to be less cropped, so I made the front crop less dramatic.  I also added a few inches in length to the sleeves and skipped the cuffs. 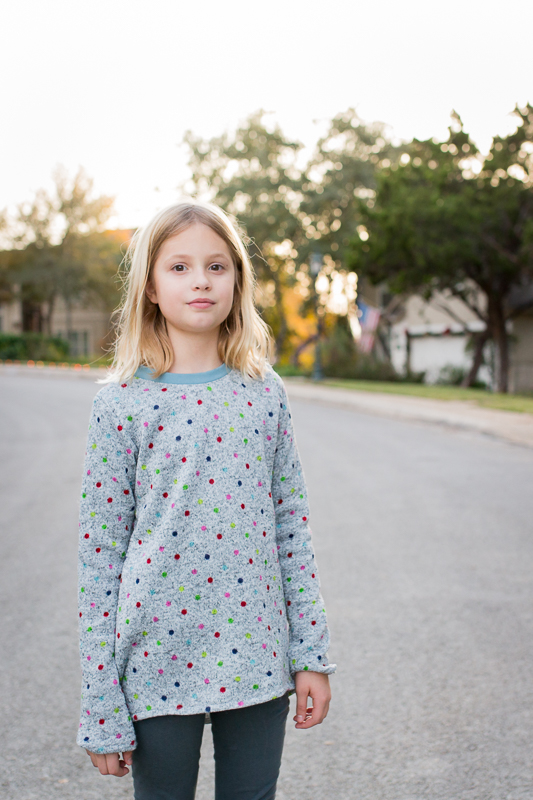 I am used to binding necklines since that is the way I learned to do it using Ottobre patterns.  I spent an embarrassingly long time debating whether I should do the bound method for this top or get out of my comfort zone and try the traditional method.  I decided to try the traditional method and I am so glad I did.  It was so easy and the results are professional looking. 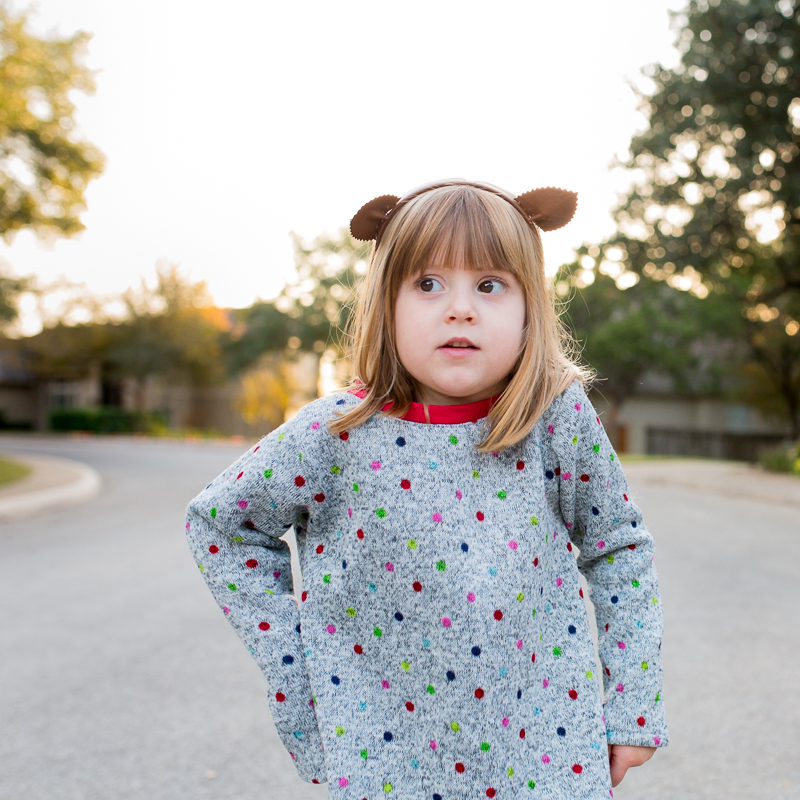 After I made the tops, I decided to try the Virginia leggings as well.  All three of my girls wanted the knee patches and they each wanted a different patch : the ovals for Indigo, hearts for Tia, and kitties for Iris.  Indigo really wanted real leather, but I wasn't up for the possible maintenance involved with that, so instead I chose a tan, heavier weight linen. 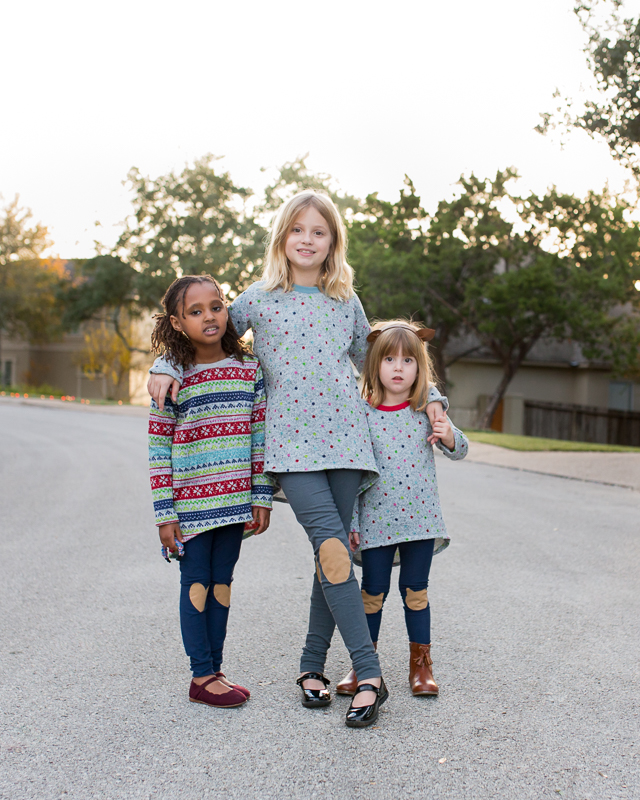 Like, the O+S Playtime leggings, this pattern is only one pattern piece, which is convenient and simple and makes for a quick sew.  Again, I cut the pattern one size larger in length than width.  And for all of my girls I could have even added an extra inch or so to that.  So, I left the bottoms unhemmed.  For Indigo's, I decided to add a cuff, in case the leggings ended up shrinking even more in the wash. 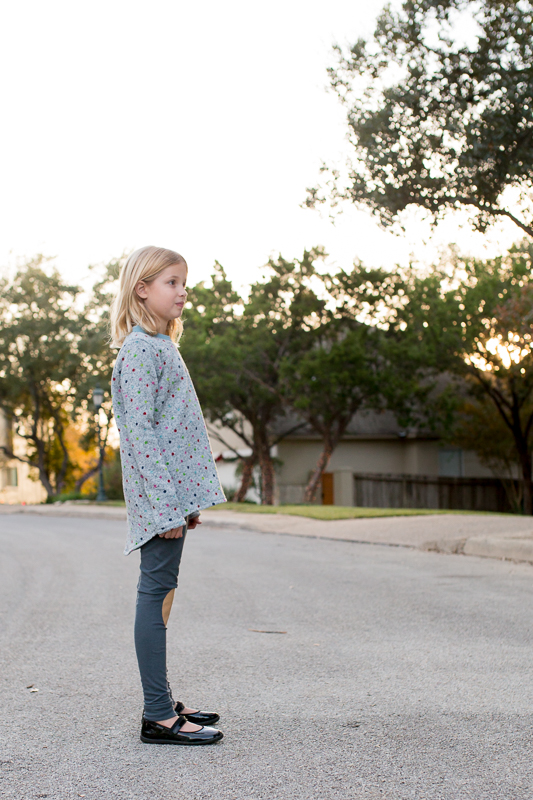 I love the look of footless tights and these are similar.  They are very fitted, which I really like.  But I would definitely recommend sewing them with a jersey that has some spandex in the mix to ensure good recovery (meaning that the fabric will bounce back and retain its shape.)  Most of my jerseys in my stash do contain 5% spandex but I unintentionally cut Indigo's from a Handcrafted knit.  It's lovely stuff but doesn't have great recovery and would have been better suited for a top. 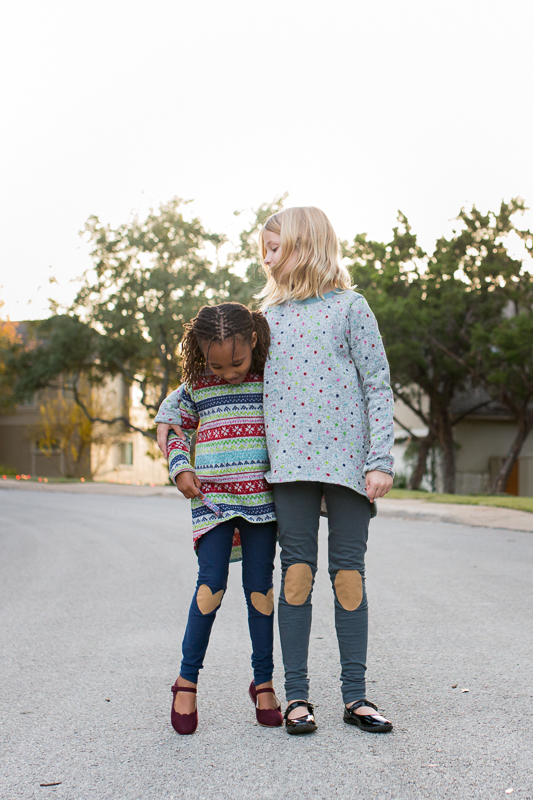 I have to admit that I was kind of hoping that not all three girls would want the knee patches.  They take a little bit of time, and I struggled with the placement a bit.  The ovals were clearly marked on the pattern but not the kitties or hearts.  So I found the center of the oval and the center of the other appliques and then placed them there.  Then I created my own template using Swedish tracing paper so I could iron them on in exactly the right place. 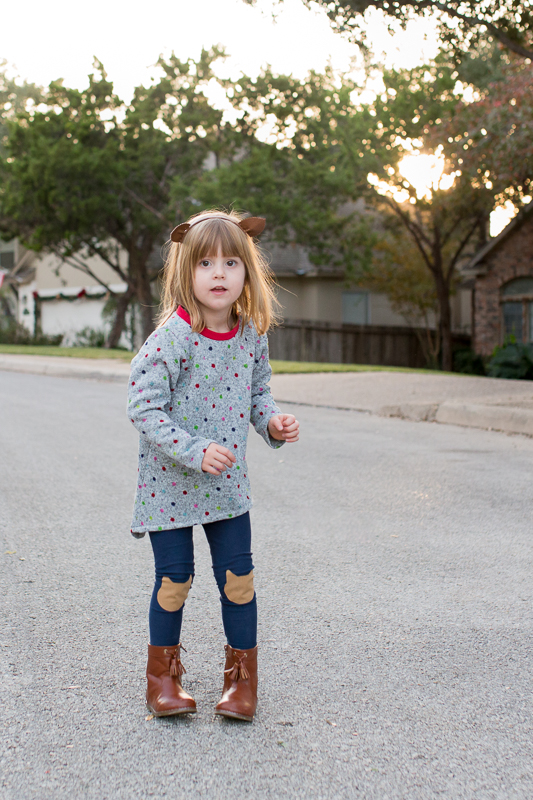 But ultimately it was totally worth it and the results were even cuter than I expected.  I don't think the photos  can adequately do those patches justice.  They really are adorable and the kids love them! 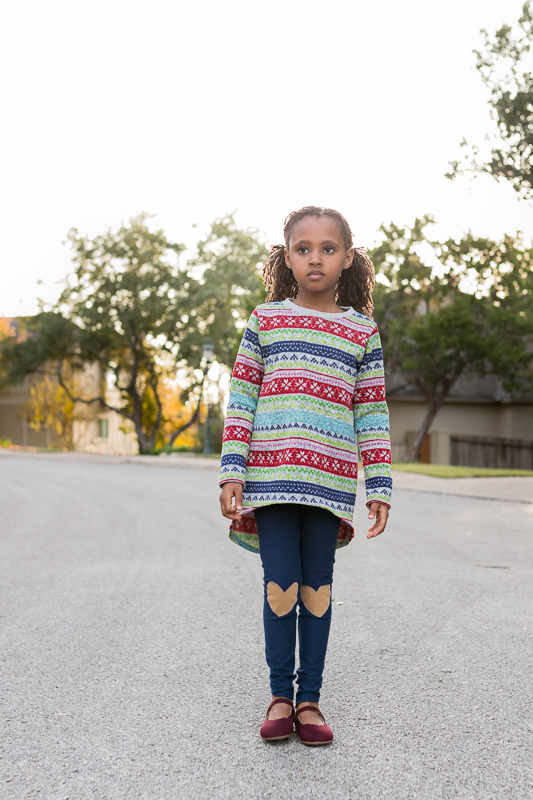 I would definitively recommend both of these patterns to the beginner and advanced sew-er alike.  They are both fantastic, with clear instructions and a good fit.  And, best of all, they were a huge hit with each of my three girls.  You can't go wrong with that! 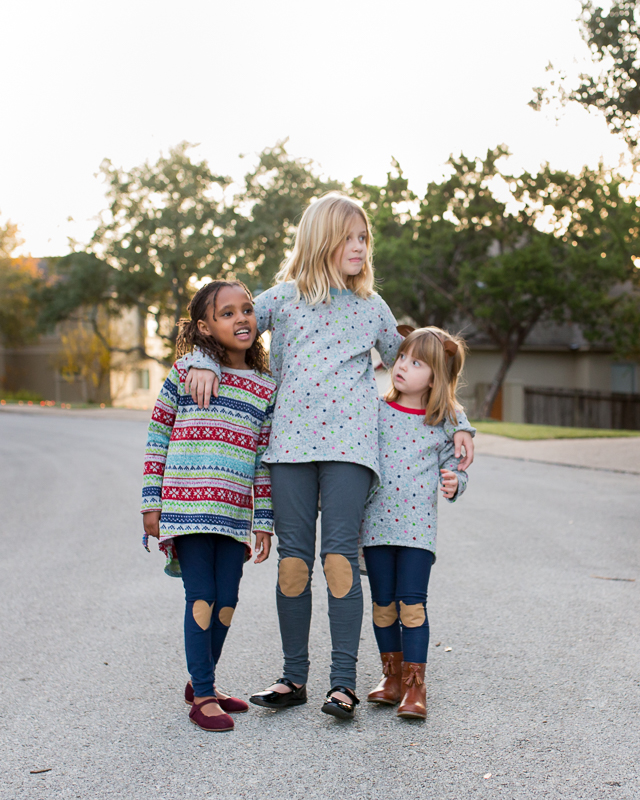