I can honestly say I never thought I would see the day.  What day is this? The day where Jude would happily and enthusiastically sleep in his own bedroom.  So many people said it wouldn't happen until he was at least 12!  :)
He has been sleeping in our room, at least for part of the night, for most of his life. He had a short stint where he slept in his own room but would try to come into our bed over and over during the night.  Dan would repeatedly bring him back to his own bed.  We finally decided that it wasn't worth it, brought his mattress in our room, and he slept on the floor in his "nest" for the next year.
A lot of other parents view this as "weak" but if you look back to all of human history, children have always slept near or with their parents.  It would be unwise and unsafe to do otherwise in most of the world.  Babies come wired to bed near their parents but, of course, can be conditioned to sleep alone.  Indi slept with us, at least for part of the night, until she was 15 months old, but transitioned into her own room more easily than Jude.
So back to Jude, my friend, Heather, had mentioned that their kids were doing great sharing a room, and there was some desire on Dan and my part to "get our room back".  We asked Jude if he'd like to start sleeping in Indi's room.  He asked, "Can we talk a little?"  I replied, "as long as you whisper." and there you go, that was it!  We moved his nest into her room (across the hall from us), and he even asked that we move his mattress closer to Indi's pack 'n play which was so dear! So far, so good.
On Saturday night, the first night that we slept without Jude in our room, I have to admit, I went to bed and I missed him.  I asked Dan how he was feeling and he said he missed him, too.  But then I turned on my night stand lamp, did some reading in bed followed by some journaling, said "Goodnight" aloud to my husband (instead of in our usual whisper) and I enjoyed having my space again.  But I am glad it was also in Jude's time.  We'll always have those special memories to cherish.
I took this photo of the kids sleeping in their room together.  It was actually very dark in the room so I had to use the flash.  It's not in focus, but Jude woke up a bit when I took the pic, so I wasn't going to risk taking another one. 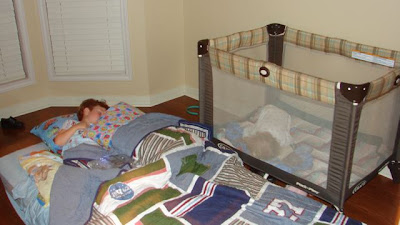