A little bit of Jude... and some other stuff

edited to add another jude-ism: I picked Jude up from school and his teacher told me that they started music class today with a new teacher named Mindy. Jude and I then had the following convo.
Me: So was your new music teacher, Mindy, our friend Mindy or a different Mindy? (Jude's always surprised when someone has the same name as someone else that we know.)
Jude: No, it was a different Mindy.
Me: Was she young or old?
Jude: Old.
Me: Like as old as me?
Jude: No, even older!
Me: Really?!
Jude: Yep, like as old as daddy!!!
*******************************************
I was bringing Jude to school this morning and we were talking about (what else but) Dell's baby shower. I told him that the guests would be coming with gifts for the new baby. He said, "Wow, mommy, just like the story about baby Jesus!"
Earlier this week, I finished the cards with the quotes about babies and motherhood. My friend, Mindy, card-maker extraordinaire, wrote this blog post about the awesomeness of ultra fine tipped Sharpies, and after using them myself on this project, I gotta say, I concur. The best part about them is that they don't smear. At all. It's the small things, people... which I now see is basically the title of Mindy's post about this. I guess I subconsciously stole it from her.
Without further ado, here are the quote cards: 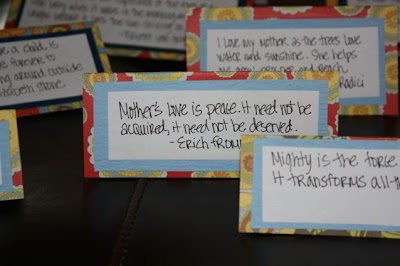 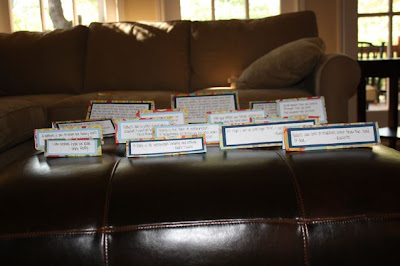 I have them all in one place for the purpose of the picture, but I plan to place them throughout the house.

While I was reading and writing out some really beautiful quotes for this project, I realized that this idea would transfer well to birthday or Mother's Day cards for mothers, mothers-in-law, or grandmothers. You could take the same generally concept and apply it to anyone in your life, really.

Indigo worked on an art project of her own while I worked on the cards. 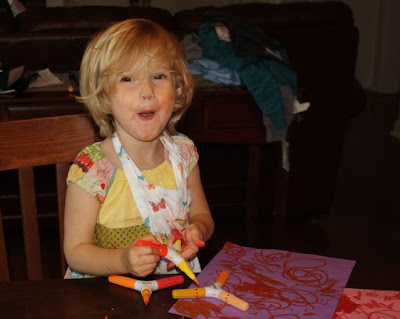