School may be out for summer for everyone else, but one of the benefits of homeschooling is that you can make your own schedule.  That means for us, school is back in session. 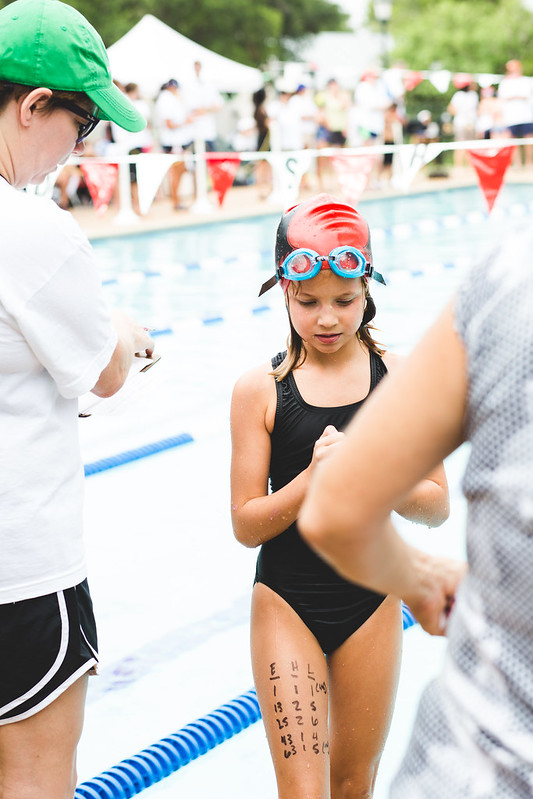 We took most of May and all of June off but decided to do school in July.  We then plan to take August off when the baby arrives.  I'm due at the end of the month, but my shortest pregnancy was 40 weeks and 6 days, so we're thinking the baby will most likely make her grand entrance in August. 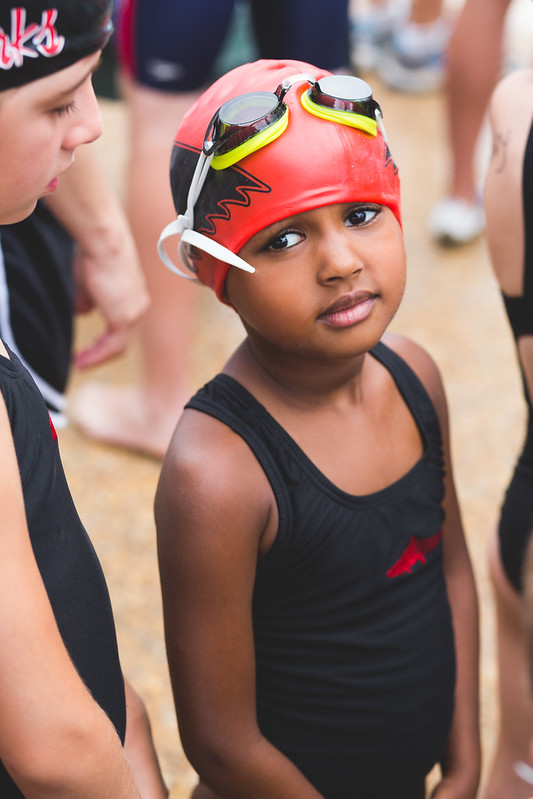 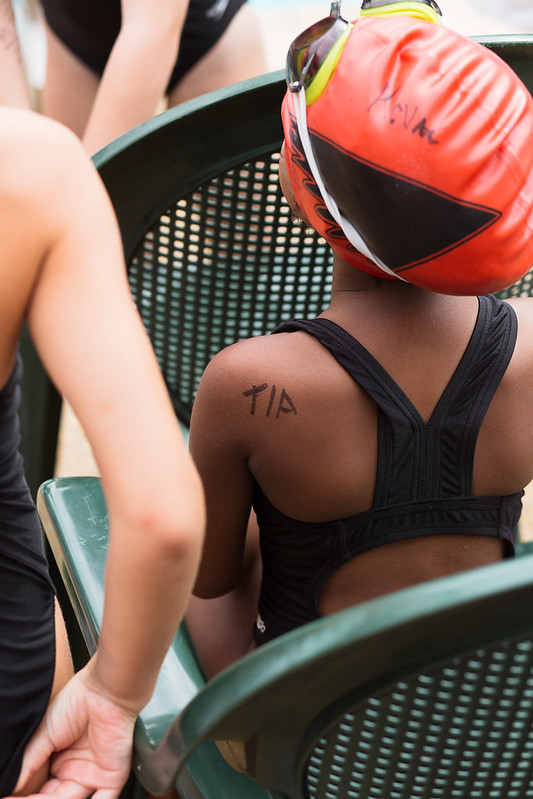 The three big kids swam on our neighborhood swim team.  Until the public schools got out in June, that meant three separate evening practices most weeknights because they were all in separate age groups. 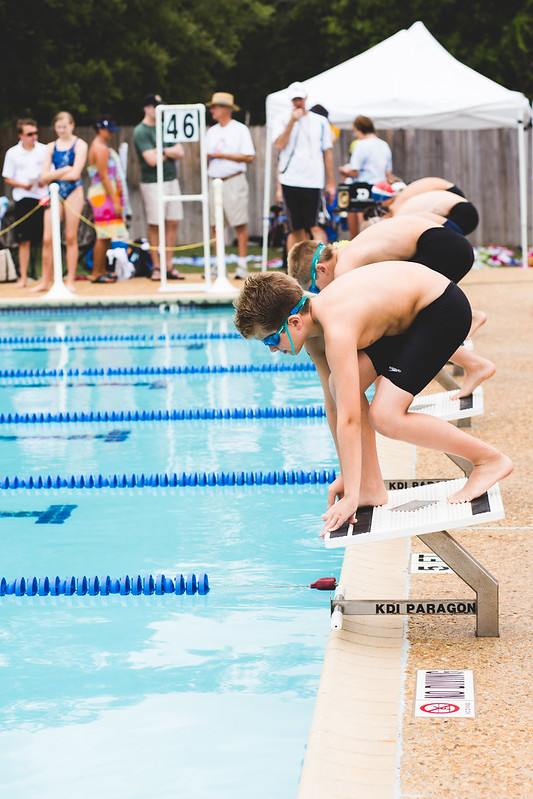 We had to make Iris give up her afternoon nap because otherwise she would be up until midnight (literally).  Yet, as a fourth child and one who has been carted around all over the place, she has also learned how to fall sleep anywhere.  During the last part of swim practice Iris looked like this at least half of the time. 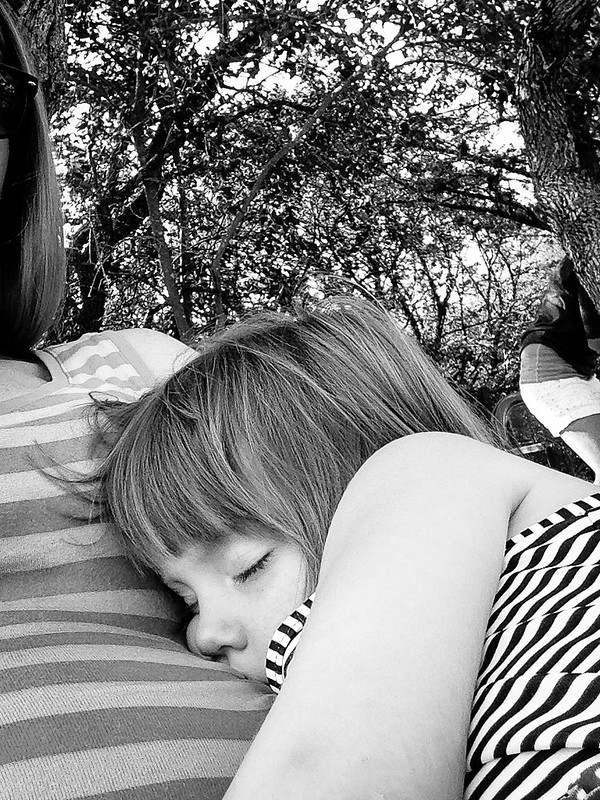 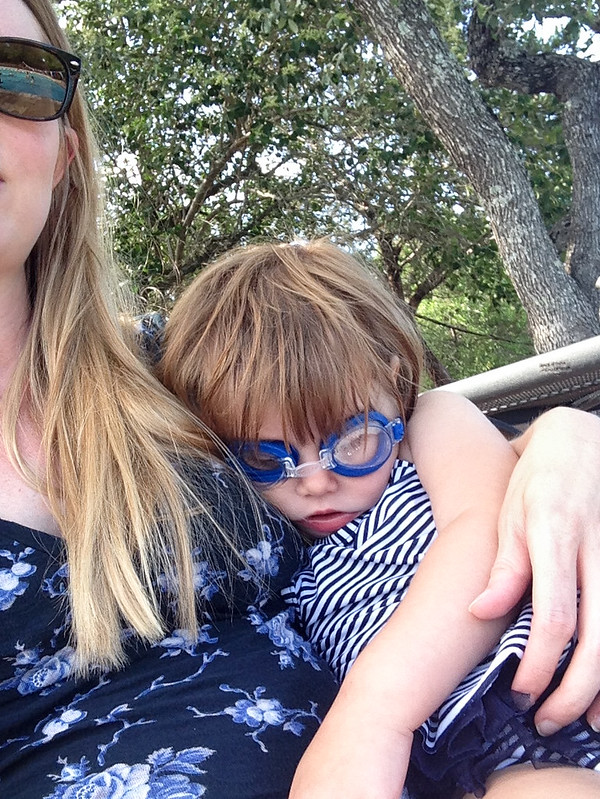 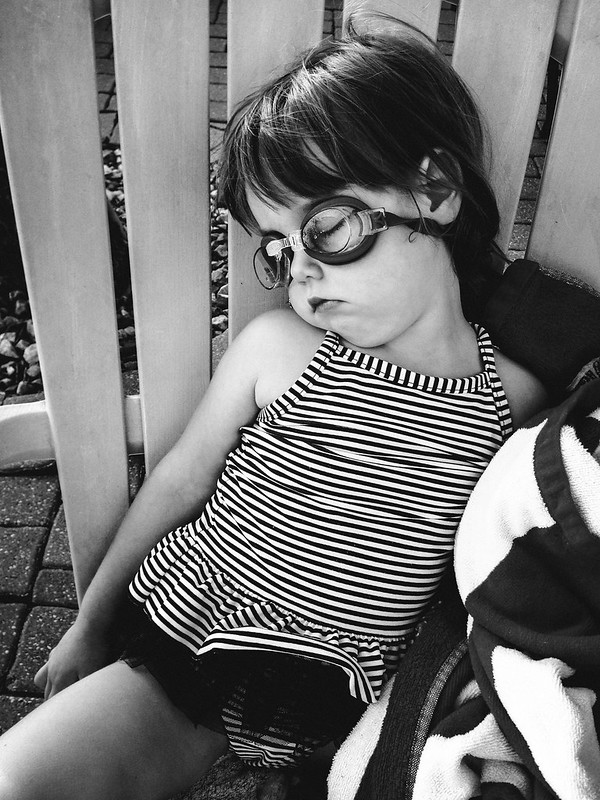 In June, the kids' swim practices switched over to the morning.  I also signed the kids up for four weeks of (fun) afternoon summer school classes.  Then they had five weekend swim meets. 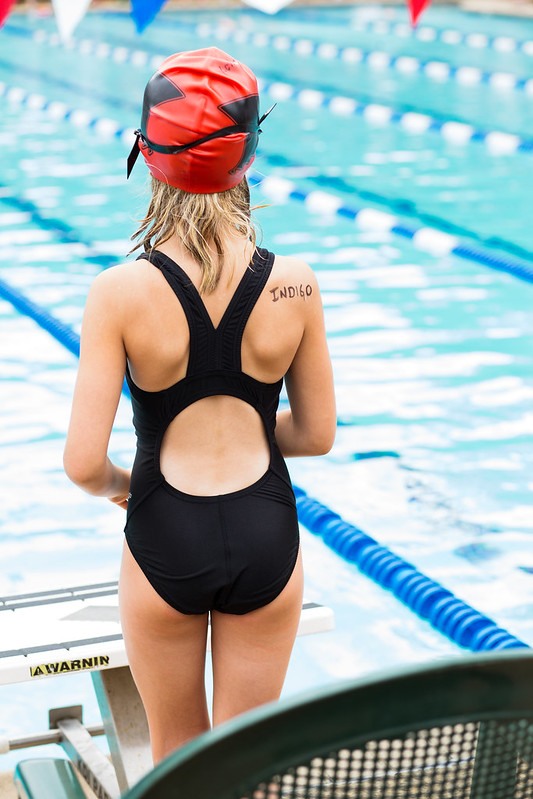 So, yeah, that was a little much for my liking.  Even the kids said next year they'd prefer not to do summer school and swimming at the same time.  They enjoyed it, but it got tiring for them, too. 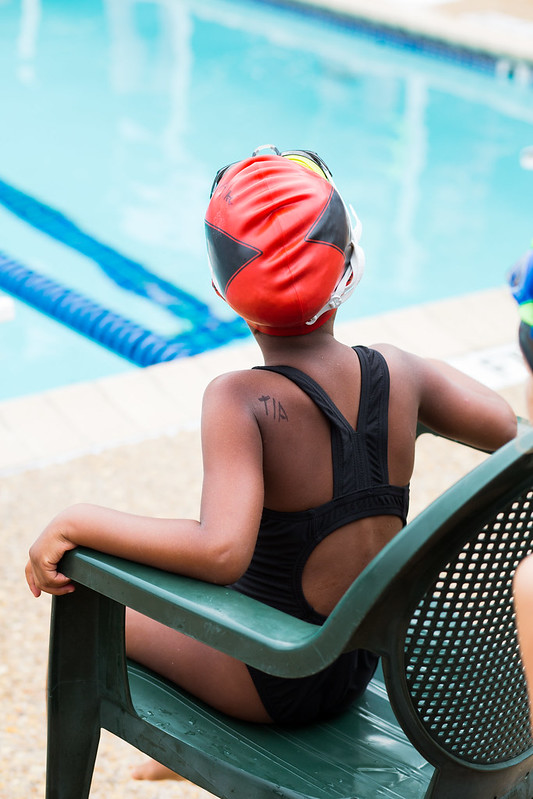 One of the best parts of my day was the evening which we spent reading.  We read for about an hour and a half each night.  I'd read 30 minutes with Tia at bedtime, then I'd listen to Indigo read for 30 minutes, followed by a 30 minute read aloud with Jude and Indigo.    Indigo is really into Mr Putter and Tabby books right now.  For our read aloud book, we read D'Aulaires' Book of Norse Myths.  In Waldorf education, Norse mythology is introduced in 4th grade but Indigo was really into it, too.  We were all pretty sad to get to the end of that book and the illustrations were amazing.  Next up - Robin Hood! 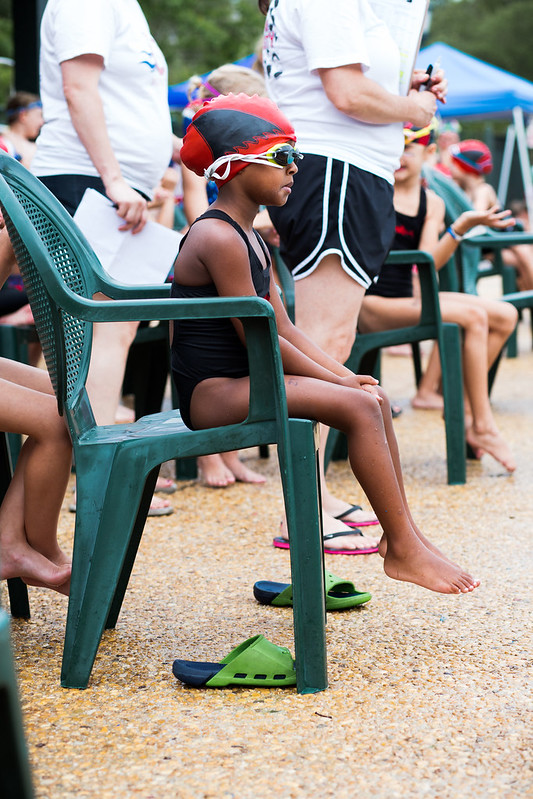 Jude and Indigo also really love listening to Sparkle Stories. Their favorites are the Martin and Sylvia stories. 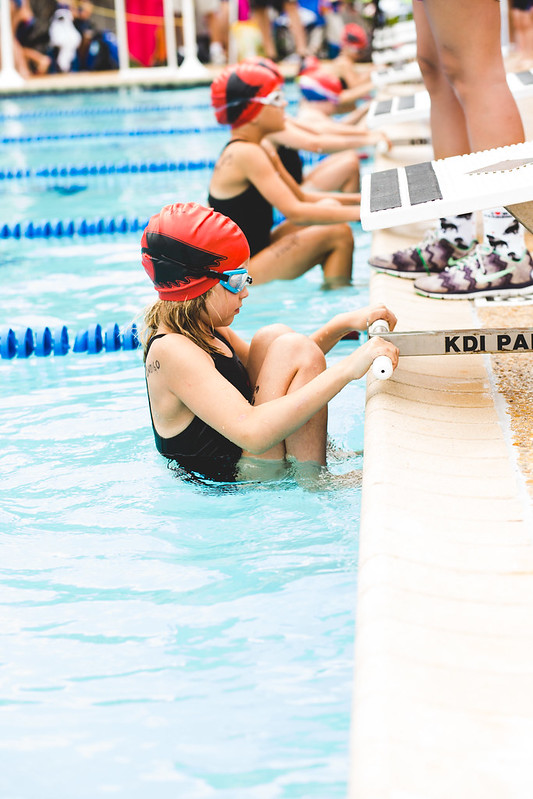 Most nights I fall asleep to one of the guided relaxation audios from this Birth Relaxation Kit.  I've had what I like to call 'pregsomnia' here and there and listening helps me fall asleep quickly.  Also, it usually helps me get back to sleep if I wake up during the middle of the night.  I've slept well most of this pregnancy.  The audios are also meant to prepare you for birth (a form of hypnobirthing).  I can't comment on this specific program yet, but I enjoyed the discussion on it here and here.  I did different birth hypnosis audios to prepare for both Indigo and Iris' births and I think it helped.  When I think of hypnosis I think of that Gilligan's Island episode where the Professor swings the gold watch and repeats something like "You're getting very sleepy".   But it's nothing like that.  It's just guided relaxation exercises.  :) 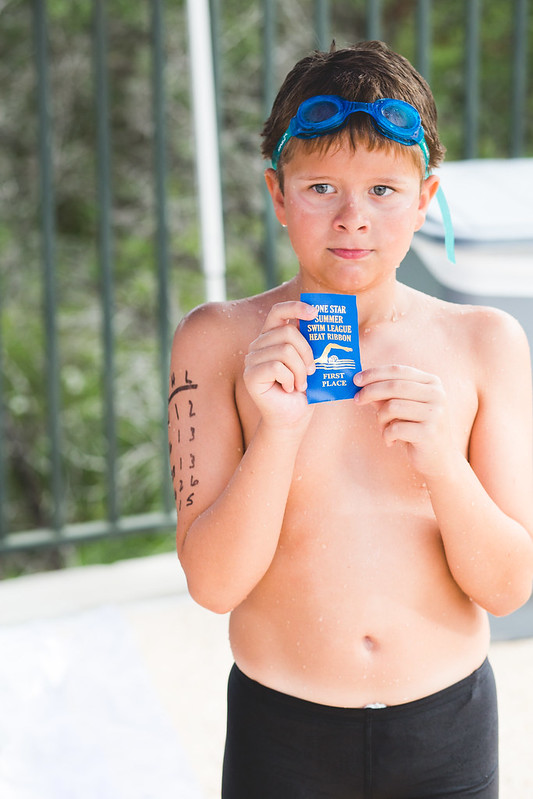 One of the audios from the kit is called "gentle sleep" and Jude loves it.  He has a hard time falling asleep at night (always has) and this really helps.  I also bought him this essential oil diffuser which works amazingly well and also the light changes colors.  It kind of reminds me of the horse of a different color from the Wizard of Oz. :)  Jude and I really like this lavender oil and this blend called Calming the Child.  I've used essential oils with him since he was a toddler, but essential oils in general give Dan a headache so we have to use them sparingly.  Only one or two drops in the diffuser go a long way.  Jude's bedroom is upstairs and when I used three drops Dan could smell it downstairs.  But if you're looking for something to aromatheraph-y your house, this diffuser would be it.  And it makes your essential oils last forever. 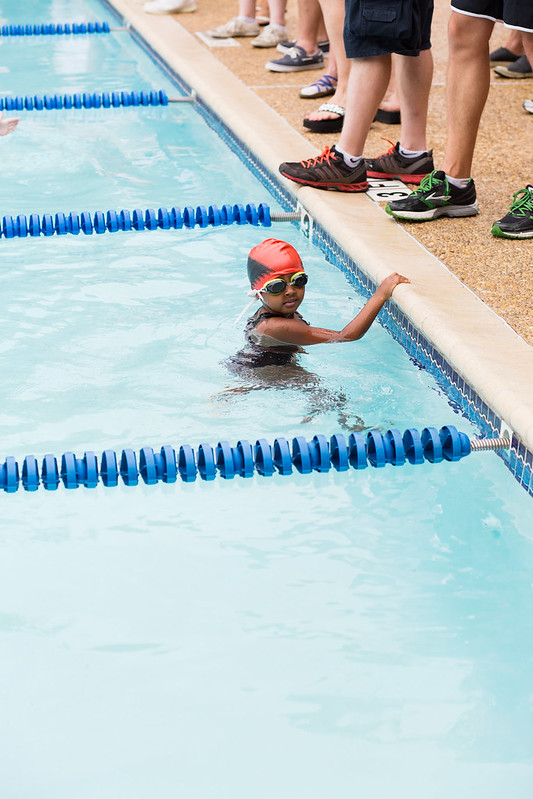 What have you and/or your kids been into this summer?  I'd love to know as we'll have our summer Part 2 after the baby arrives. :) 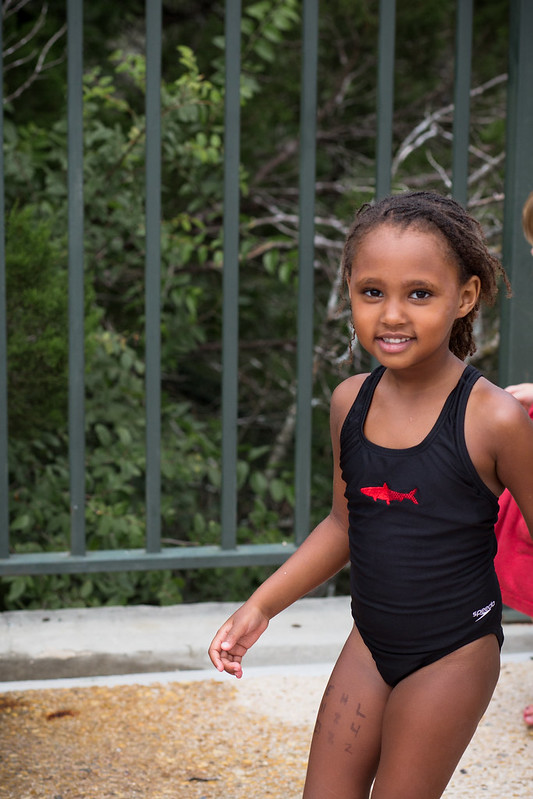