When Rachel from Stitched in Color posted about this Sherpa Fleece jumpsuit for her baby girl (coming soon!), my heart did a flip.  I was filled with so much nostalgia (is that even the right word, I don't know?) that I told Rachel it made me feel sad for the day when I will no longer have a baby to sew for.  Which is crazy because 1. I currently have a baby to sew for and 2. I don't sew for her very often!  Rachel, by the way, informed me that this phenomenon is called 'advance sadness!'  :) 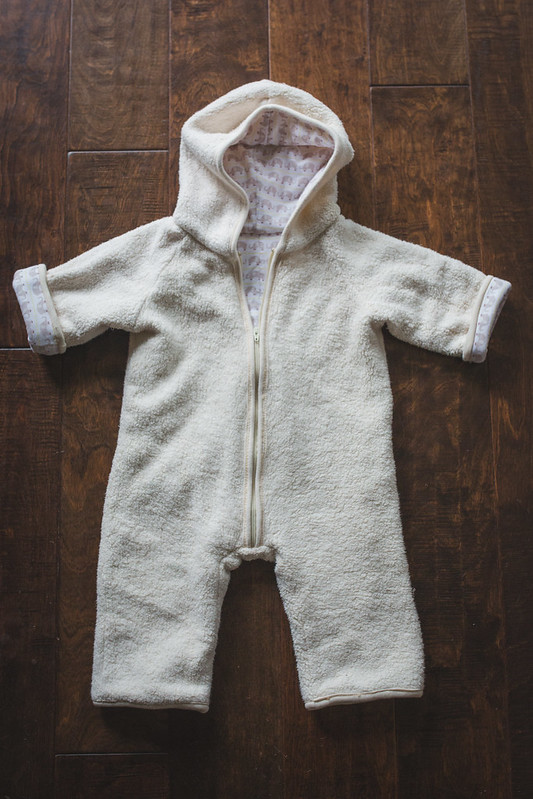 I decided I'd better grab hold of that feeling and channel it into making something for Hazel.  You know, YOLO.  (ha!)  So I ordered the sherpa and paged through my Ottobre magazines to find a suitable pattern.  I landed on Ottobre 4/2014, No. 7. 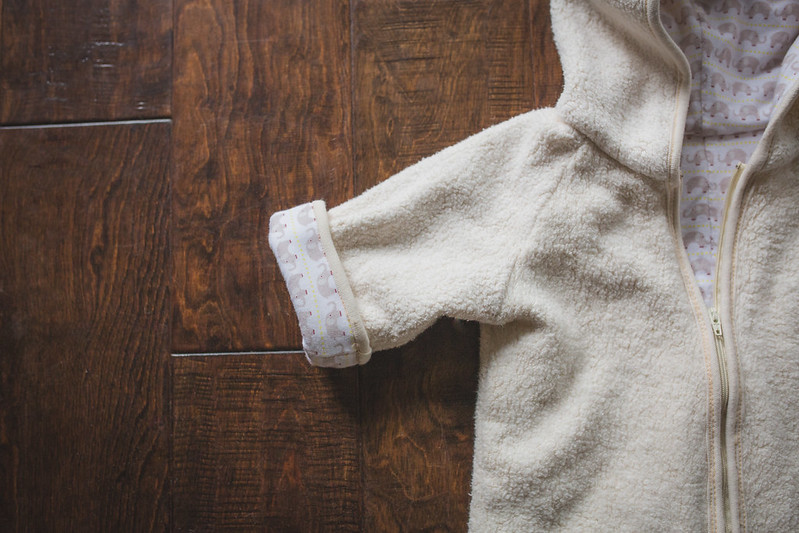 It was perfect timing, because I really did need this very thing for Hazel.  She had outgrown her previous (store bought) coverall and we've had some chilly weather this winter here in Texas.  I was listening to an audio download on Waldorf education and they mentioned how babies in carriers will often have their bare little legs exposed because their pants pull up when in a seated position in the sling or carrier, and parents may not always notice.  That has definitely happened to Hazel and I wanted a solution to keep her little legs warm and covered.  My previous method of tucking her pant legs into her socks wasn't quite as charming or snuggly as a sherpa coverall. 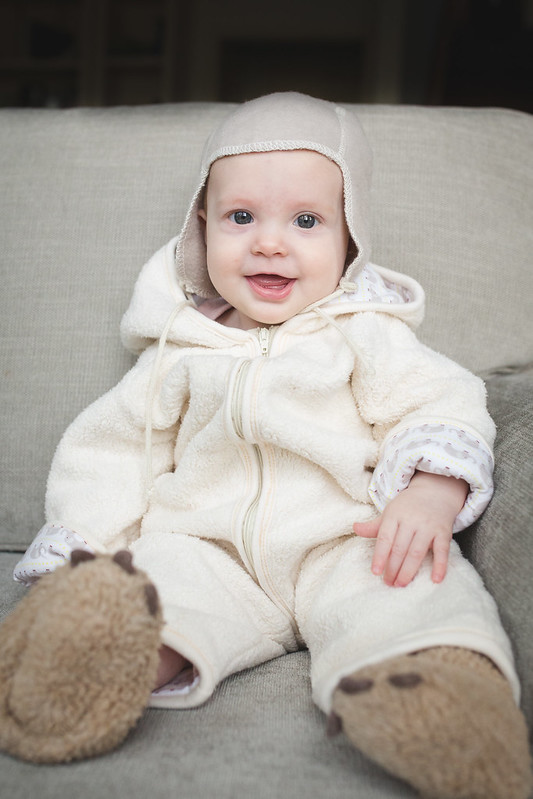 The kids and I try to get out together twice a day.  As part of the Waldorf homeschool rhythm, it's recommended to start the day with a morning walk, right after breakfast.  I was very hesitant to adopt this routine for several reasons.  For one, we aren't morning people.  So, in addition to being slow to wake up, the kids can be v e r y slow at getting their morning school work done.  Tia attends an art/play based half-day kindergarten and Iris also goes to this same (pre)school, two mornings a week.  I like Jude and Indigo to finish the bulk of their work before the girl/s get home.  That's almost always difficult and I didn't want to cut into that time. 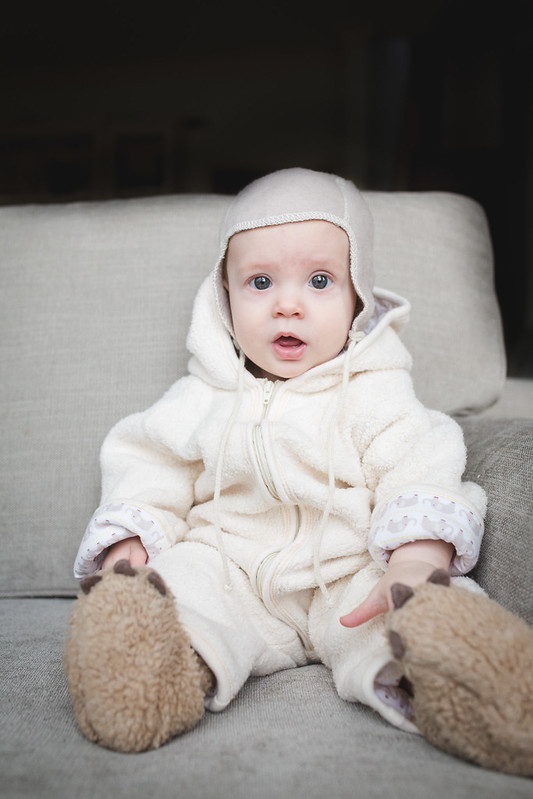 But, reluctantly, I decided to try the morning walk.  I couldn't believe it - after our walk, the kids flew through their work and were so much more focused.  I had read research suggesting that children who walk to school learn better, but even so, I was truly surprised by the difference the walk made.  Also, even (especially?)  as a non-morning person, it helps me to start the day with fresh air and sunshine.  Wearing Hazel gives me more of a workout - and exercise was on my new years resolution list.  ;)  On the three mornings that Iris is home with us during the school week, it's a great energy burn for her, too!  So the morning walk is a keeper! 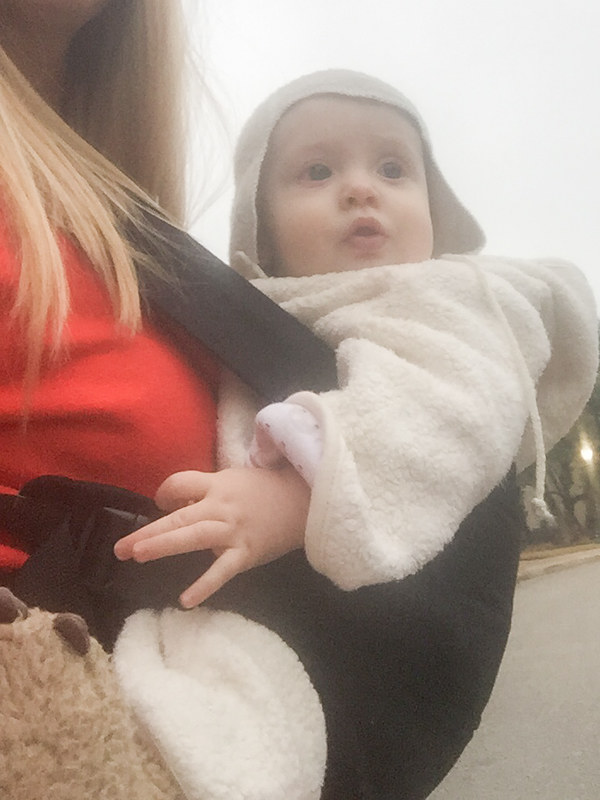 The kids come and go from our fenced backyard throughout the day.  Then we all go out together between 5 and 6pm so the kids can ride bikes and scooters before I start dinner and the little girls do bath time.  It's such a great time of day to get outside again and having these new routines has given more structure to our day as well as given  the kids something to look forward to.  (Lately they've been into making slo mo videos!)

I also have the kids do a 15 minute clean up before we head out and that motivates then to do their best work so they can get outside right at 5pm sharp! 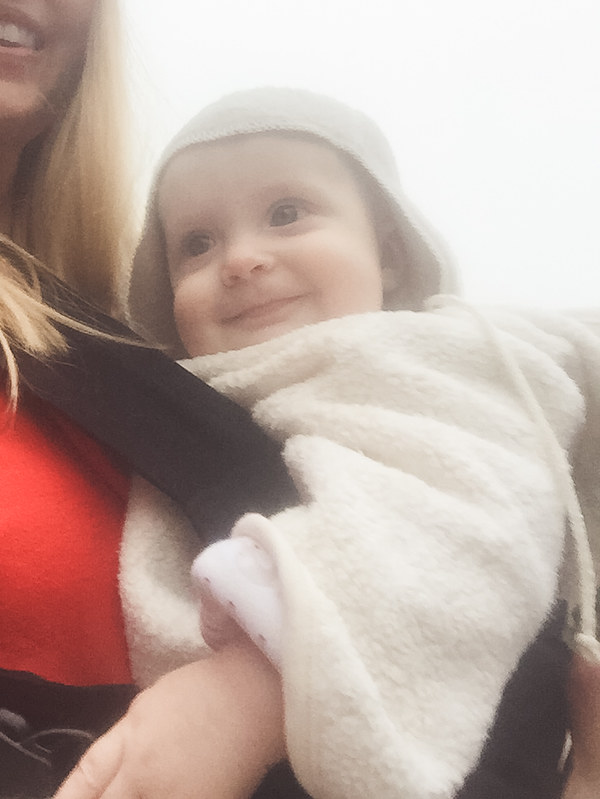 Yes, I have a pin sized chip in my front tooth from always holding pins there.  How's that for sewing street cred!

Hazel could not be any more snuggly in her sherpa coverall!  I just love it and it's the perfect weight for our mild winter.  I left out the batting and just used the organic sherpa - which is super plush!- and the Riley Blake Oh Boy! knit in grey elephants as lining. 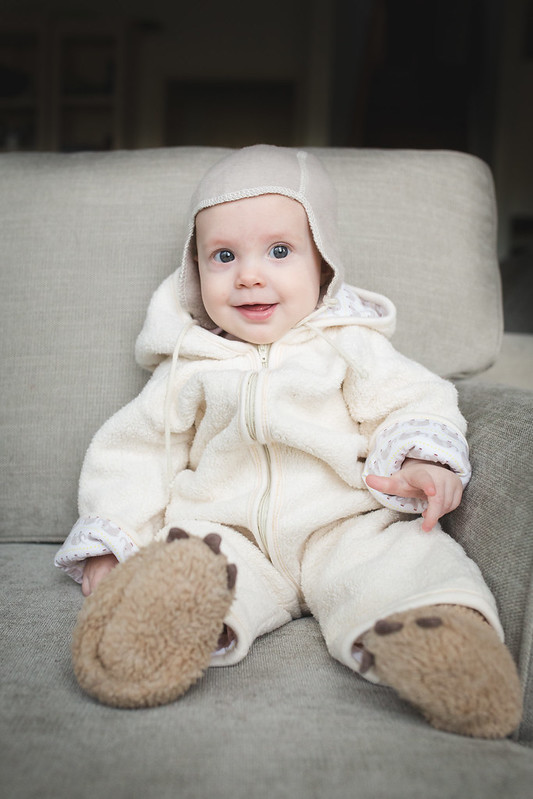 The only downside of the sherpa is that it shrunk - a lot!  Usually knit fabric runs about 60" wide (I believe?) but this was only 42"... and there was significant shrinkage.  Whereas I could sew the lining with one yard of Riley Blake knit with quite a lot leftover, I had to order a second yard of the sherpa.  That made this a more expensive project.  But you know what they say - you get what you pay for.  And this is high quality stuff! 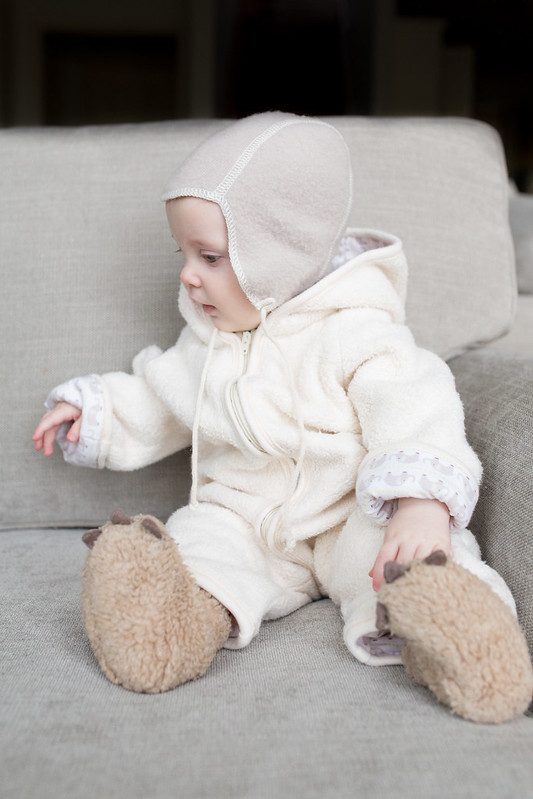 Given that, I was a little nervous about how this would turn out, particularly the fit.  Rather than go by her measurements this time, I held her previous coverall up to the pattern to compare and adjust accordingly.  The legs are perfect in length and will definitely get us through the next month of coolish weather, but if we were living somewhere with a longer winter/cool spring, I would've added even more length to the legs and cuffed them. 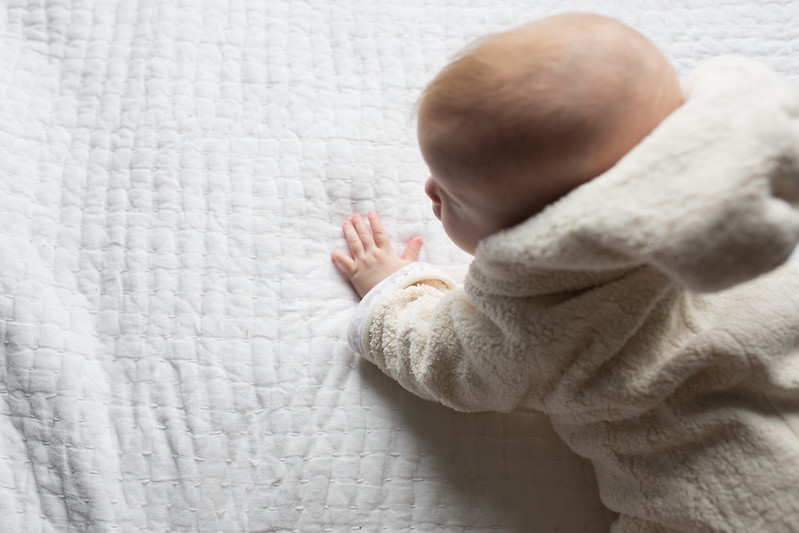 I definitely had some trepidation about installing the zipper, but it turns out it was so easy - so much easier than an invisible zipper.  There was nothing to it!  I was confused on sewing the sherpa sleeve and side seams, so I used Rae's world-famous sausage technique (that's for you, Erin!).  ;) 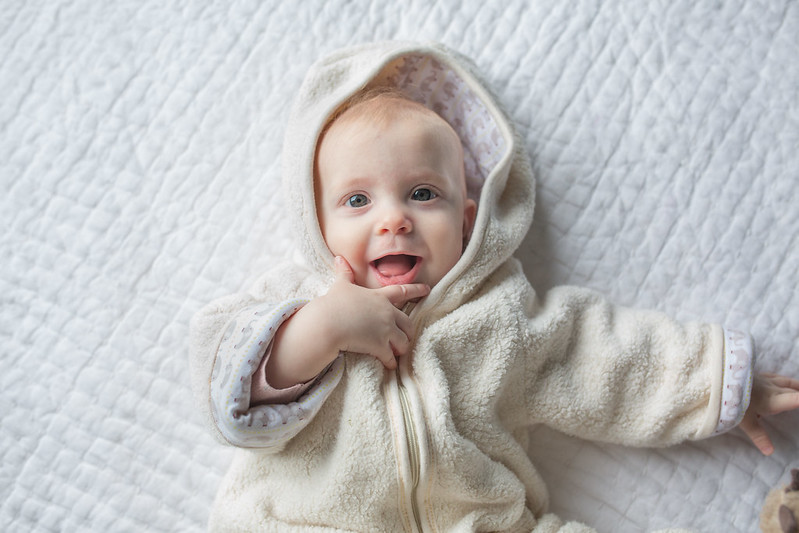 All in all, I'm very happy with this project.  I tend to shy away from sewing outerwear and yet, it gets so much use.  Hazel has worn this every single day since I've made it and will only continue to do so. And seriously, the snuggle factor makes her completely irresistible.  Of course, she is already irresistible to me but seriously, this sherpa coverall makes it too much! 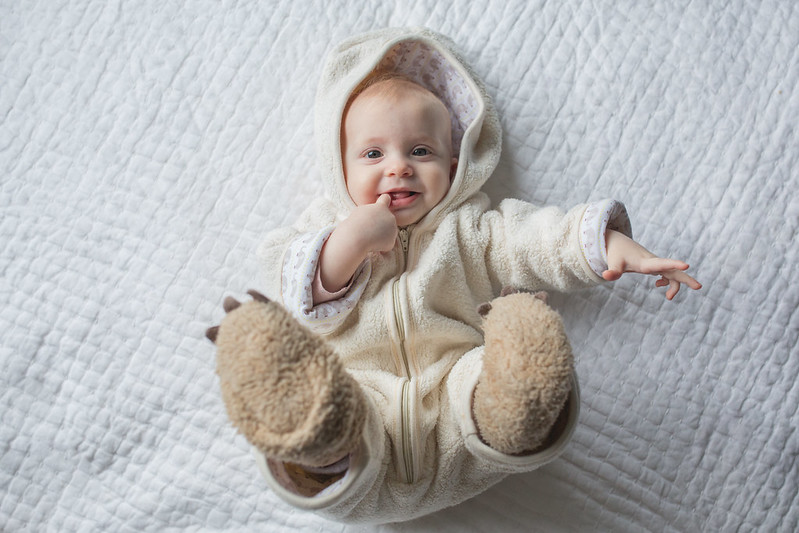 Dan says she looks like an ewok in it. 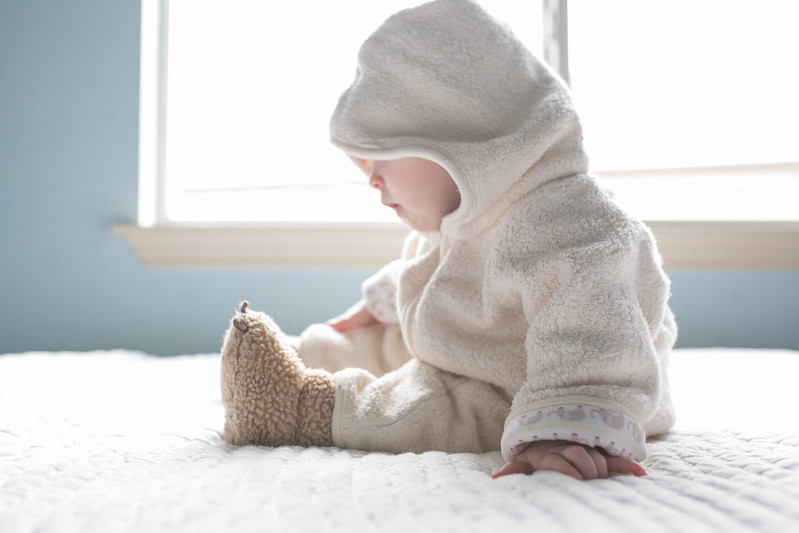 Which Jude tells me is a compliment! 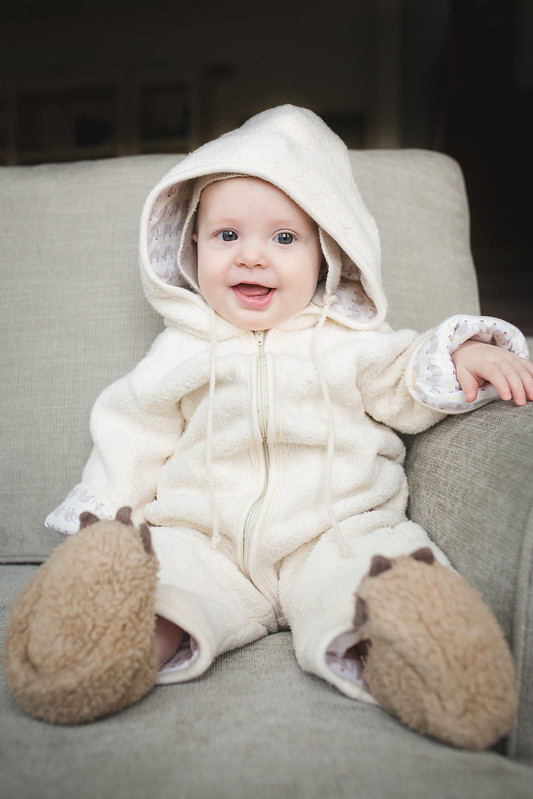