When Jude was just a wee toddler, Dan started a tradition of telling him an animal story at bedtime using Jude's stuffed animals.  It was sure to be amusing, because funny is a guaranteed kid-pleaser.  The stories were a smashing success and became a cherished part of the bedtime routine.  And the rest is history.  Every one of our children has adored his bedtime stories ever since. 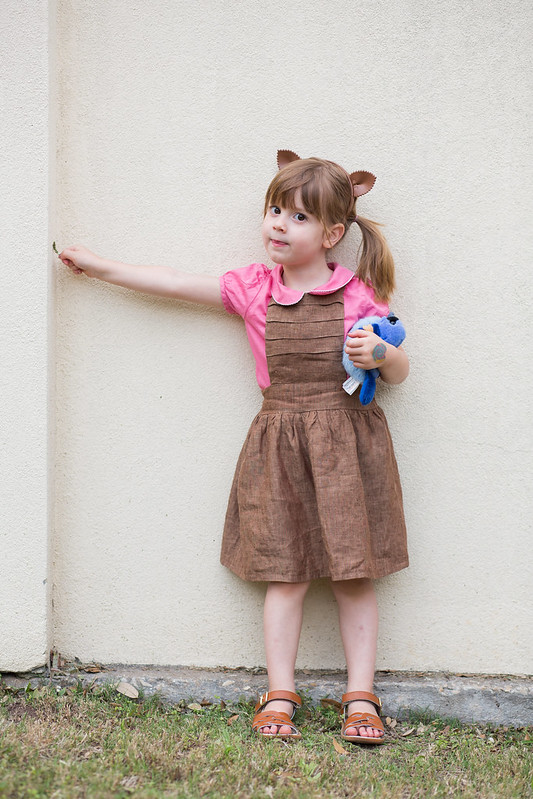 The current series is about Tia the songbird, Iris the bluebird (pictured above), and the antagonist, Sneaky Squirrel. 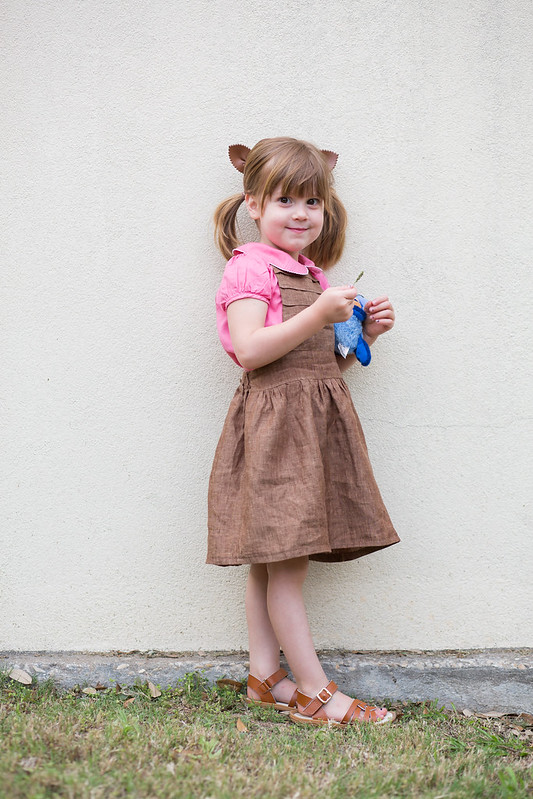 When Iris saw the Schoolhouse Pinafore pattern laying on my sewing table, she begged - begged - me to make it for her. 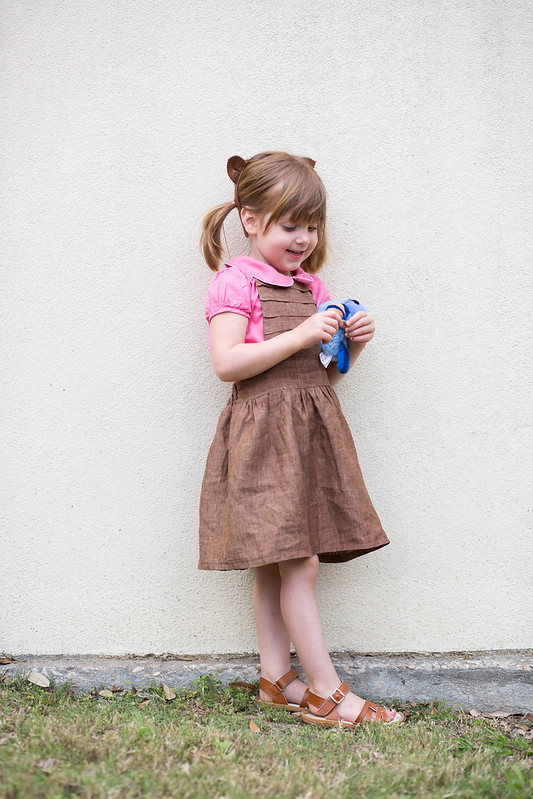 Mama, I can wear it with my squirrel headband and I will be Sneaky Squirrel!  Please, mama! 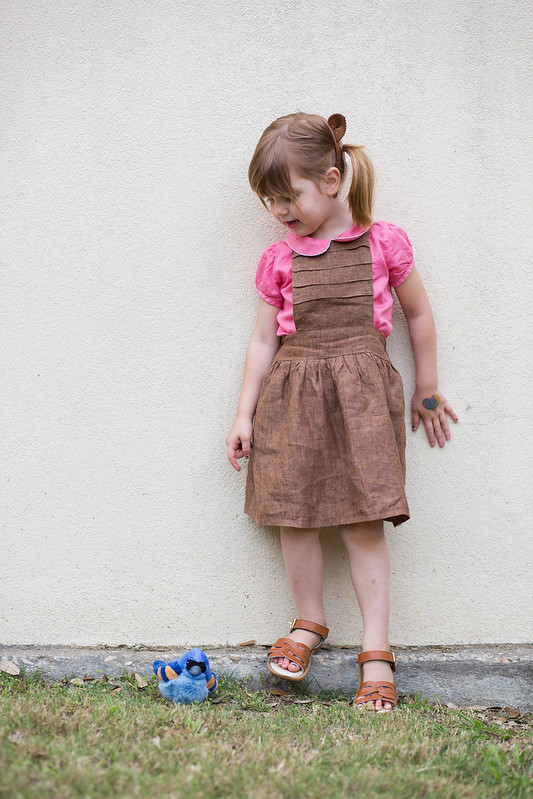 Well, how could I say no to that?  It was already on my to-do list.  Not to mention it's kids clothes week and the theme is animals.  It was meant to be. 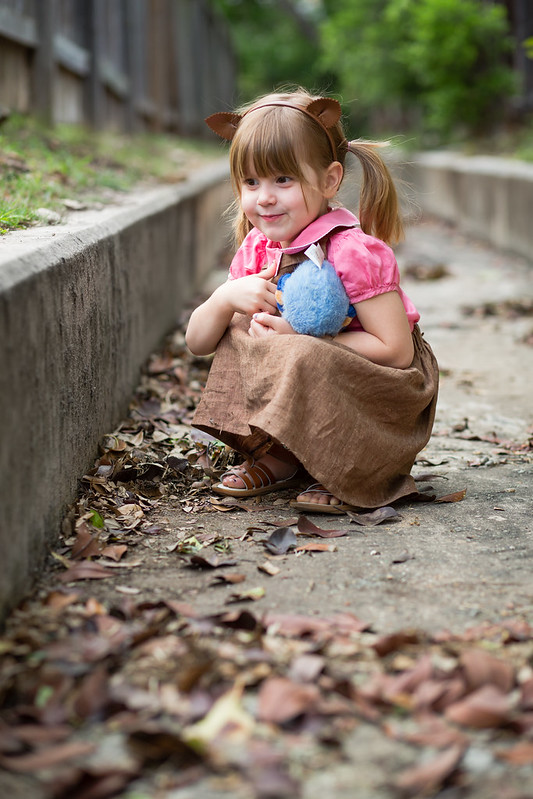 When I finished the front of the pinafore Iris exclaimed, "Oh my goodness, Mama, it's going to be so cute!" 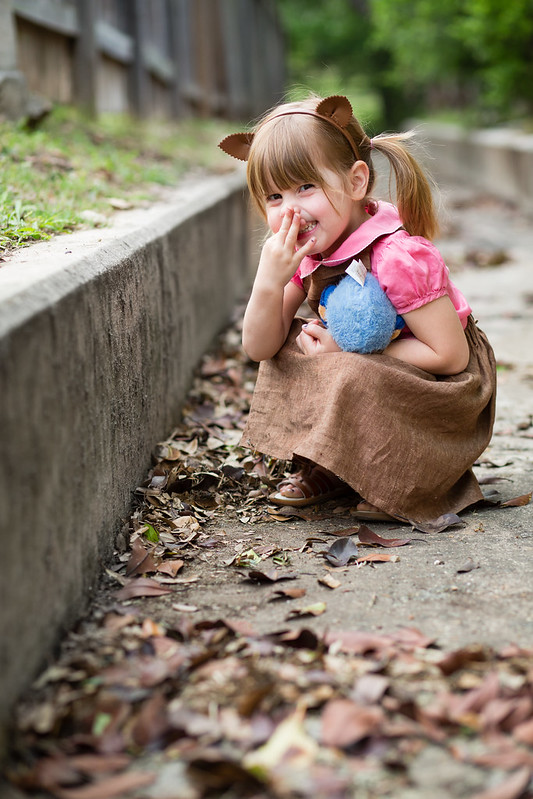 I want to just bottle her up right now.  Everything she says is so darn adorable.  I must, really must, be better about writing it down. 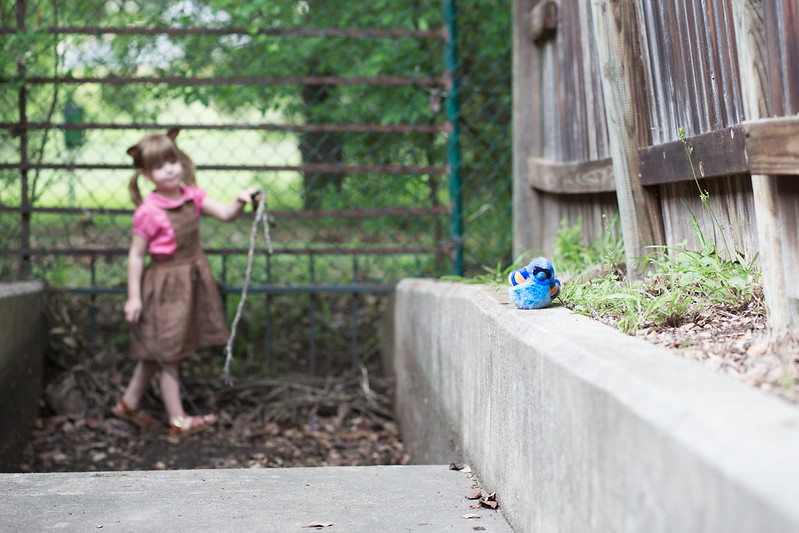 "You stay right here Iris the bluebird.  I'm going to play over there for awhile."

I have to be honest and say the finishing on this pattern was a bit lacking.  It reminded me of something you'd find on a free blog tutorial rather than a PDF pattern.  And if you make this, definitely try on the straps before sewing them down.  I cut off 3 1/2 inches from the straps! 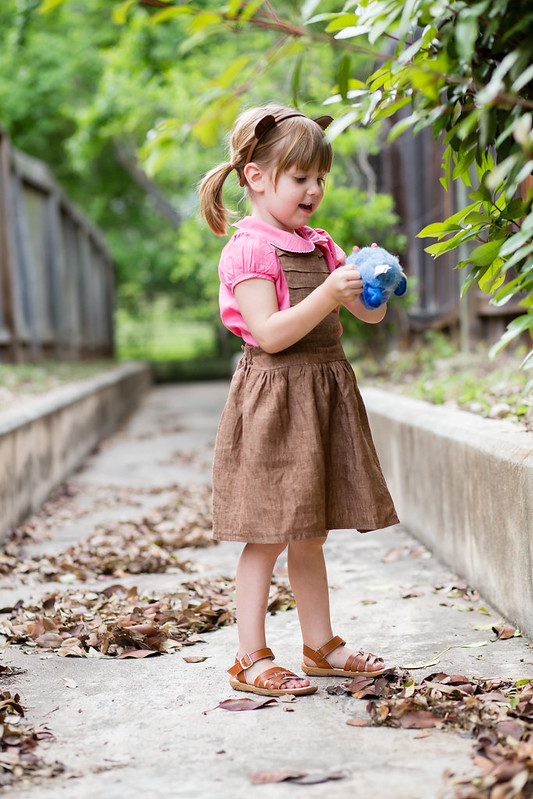 But once Iris put it on, all was forgiven.  I can hardly handle how cute she is in it and really, the photos understate the cuteness.

I love the pleated bodice. 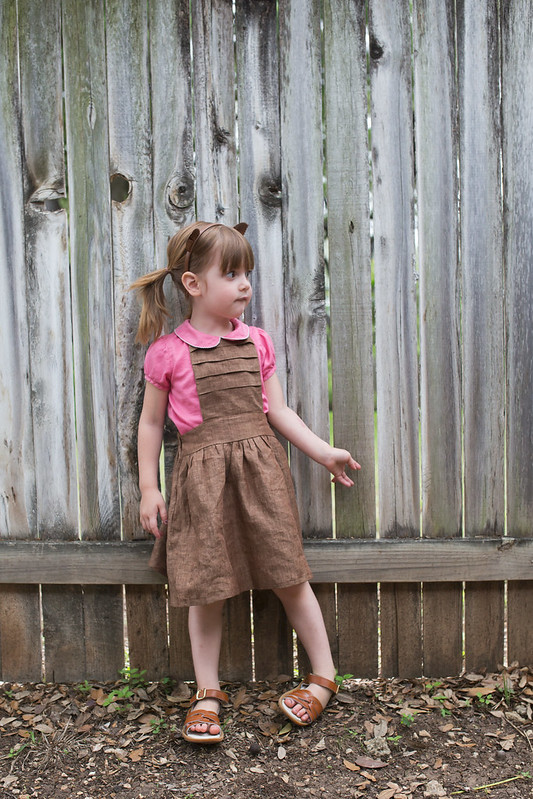 And the back buttons. 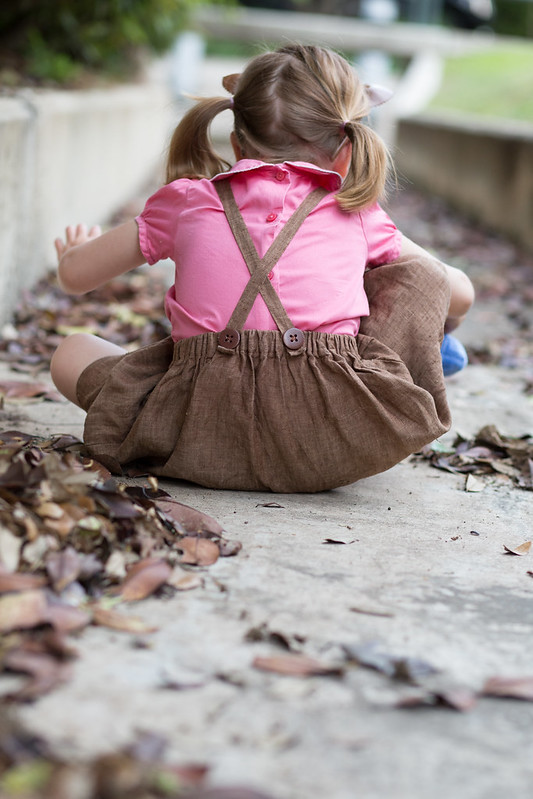 I made the pinafore with linen from Joanns again.  I know I had been raving about Joann's linen, but this time it was a bit thin, it wrinkled like crazy, and wasn't as soft as I would have liked.  I had to press (and starch) the heck out of it to get it to look like this.  In hindsight, I wonder if a thicker, more stable material would have been better for this project? 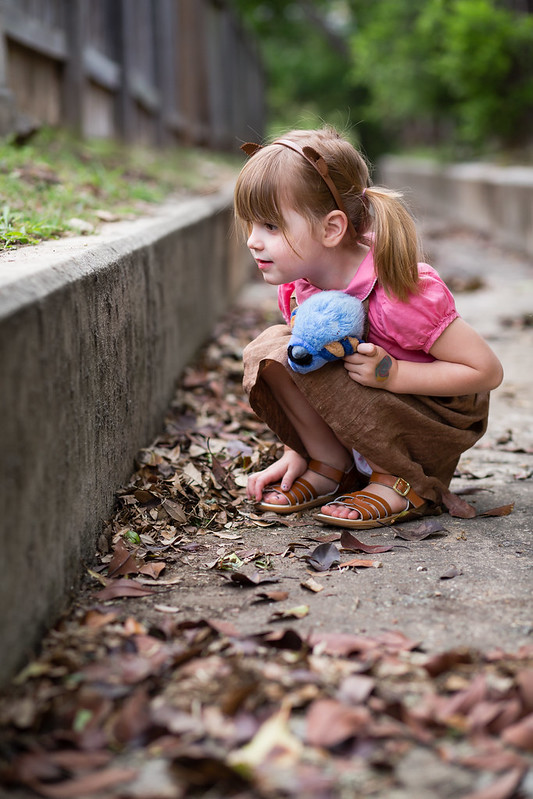 Iris is obsessed with nature and make believe.  She's always collecting nuts and acorns for sneaky squirrel, who unfortunately is currently missing.  She says, eyes wide,  "I think he was eaten - killed dead- by a monster!"  This is all part of growing up with an older brother.  The younger of our crew aren't quite as sheltered as the older ones were.  I just hope they don't frighten their friends at preschool with some of their imaginative tales.  :0

When she's not working on something for her stuffed animals, she's trying to make friends with the creatures of nature, with roly-polies (pill bugs) being a fav. 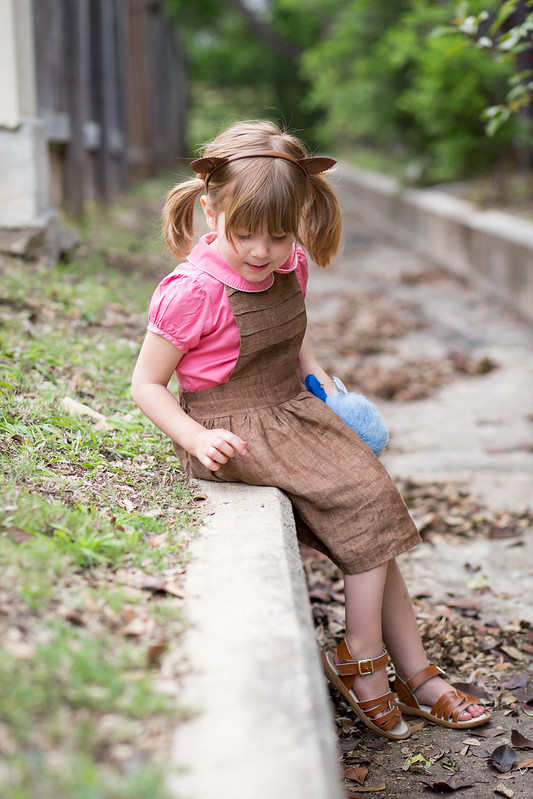 We let Iris pick out her own helmet.  She chose this shark helmet.  When she rides her bike, she smiles and grits her teeth, and then bites them together really quickly. 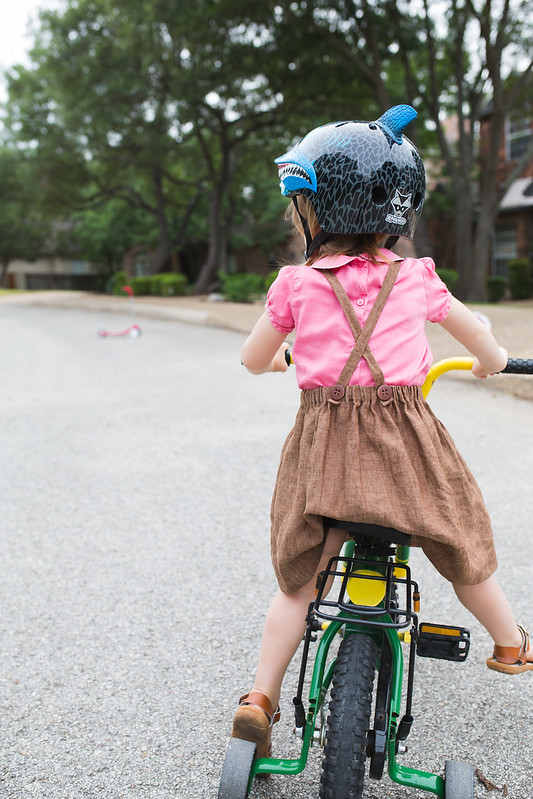 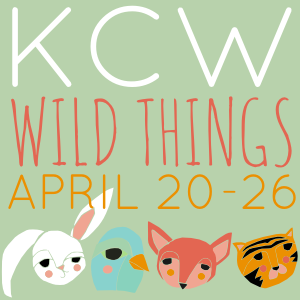