The City Gym Shorts in Love Bug by Tamera Kate

I've wanted to make a pair of City Gym Shorts, a free pattern by Purl Soho, ever since I saw Carolyn's navy with gold trim version here. (So cool, right?) 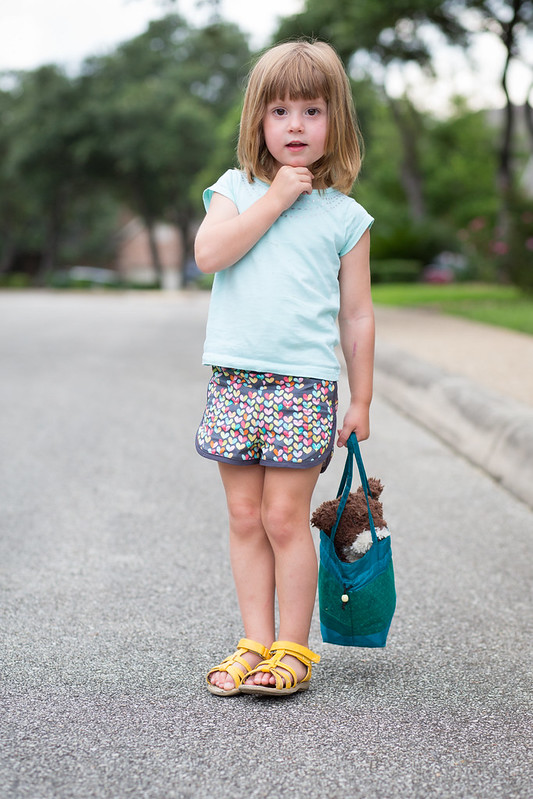 Kristin also made an awesome pair of shorts for her daughter that inspired me as well.  They weren't the City Gym shorts, but they had a similar look.  They're both racer shorts with an 80s feel that show off the girls' adorable knobby knees.  Yes, please. 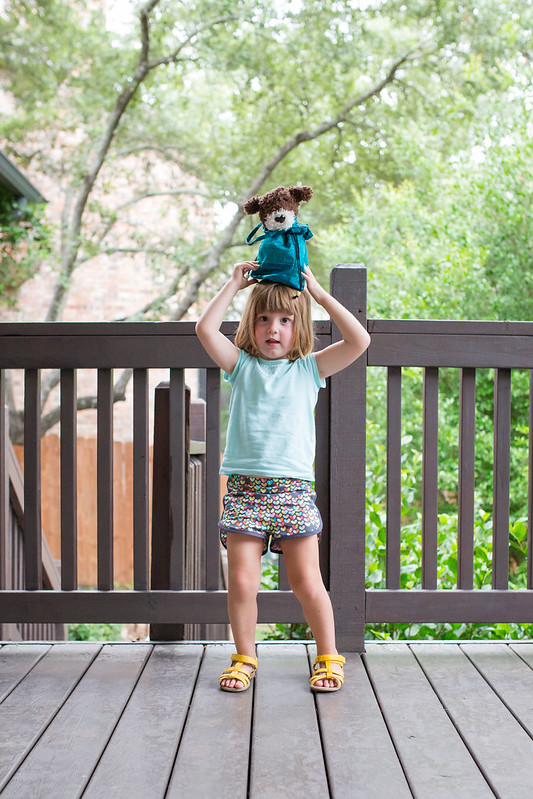 But I was having a hard time coming up with a fabric choice that would make these shorts my own.  So I forgot about this pattern for awhile. 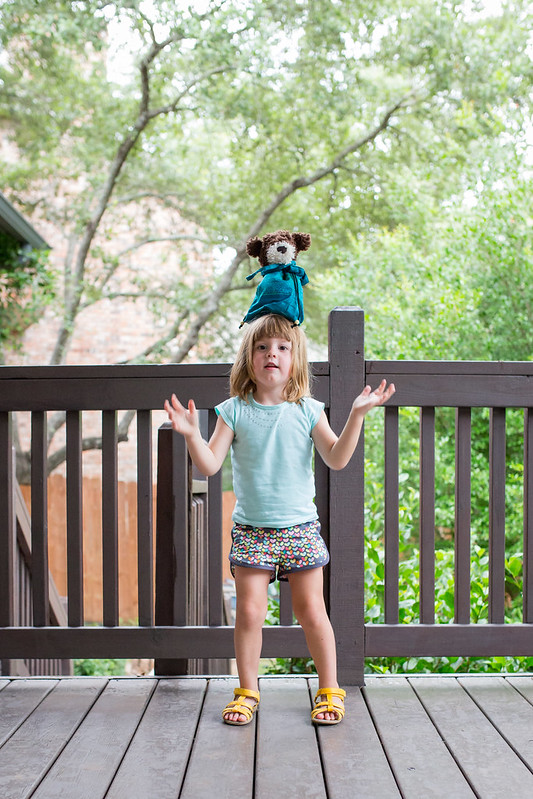 Then Tamara emailed me about her new fabric line for Michael Miller called the Birds and the Bees.  She had asked if I wanted to try out any of her fabrics in exchange for a blog post.   When I saw the charcoal heart print, I immediately knew I wanted to turn it into a pair of city gym shorts. 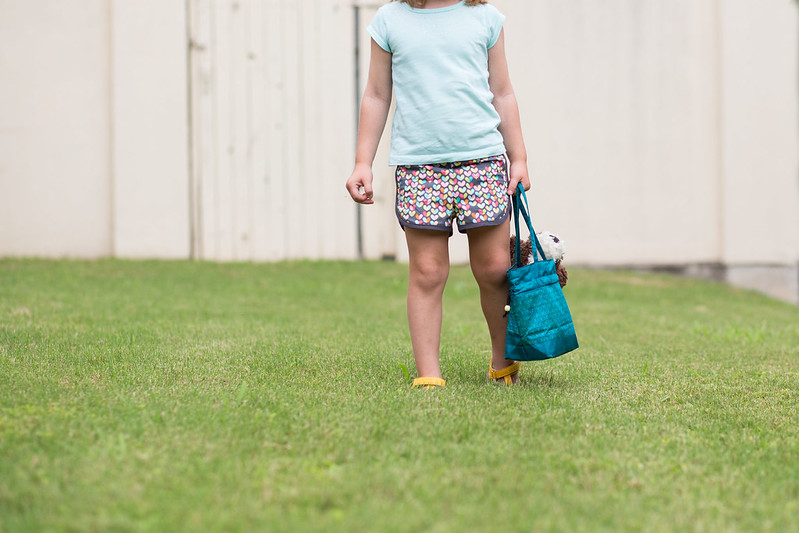 The heart print is called Love Bug because every so often a heart opens into a ladybug.  I knew Iris would love it and it had that 80's vibe I was going for. 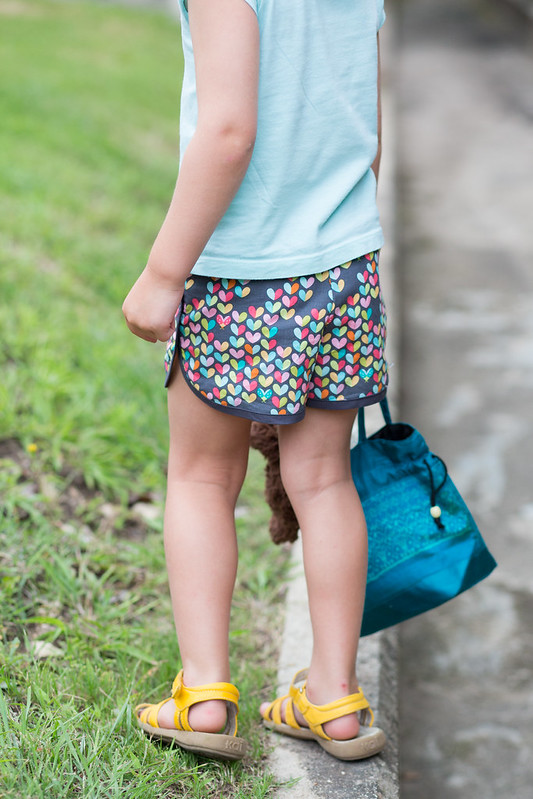 Tamara sent me some coordinating Michael Miller cotton couture to use for the bias binding.  Man, I love that stuff!

Iris's sidekick in the photos today is her beloved pal, Pete.  Everywhere she goes, Pete goes.  Usually she treats him exceptionally well, but today, she was feeling a little frisky. 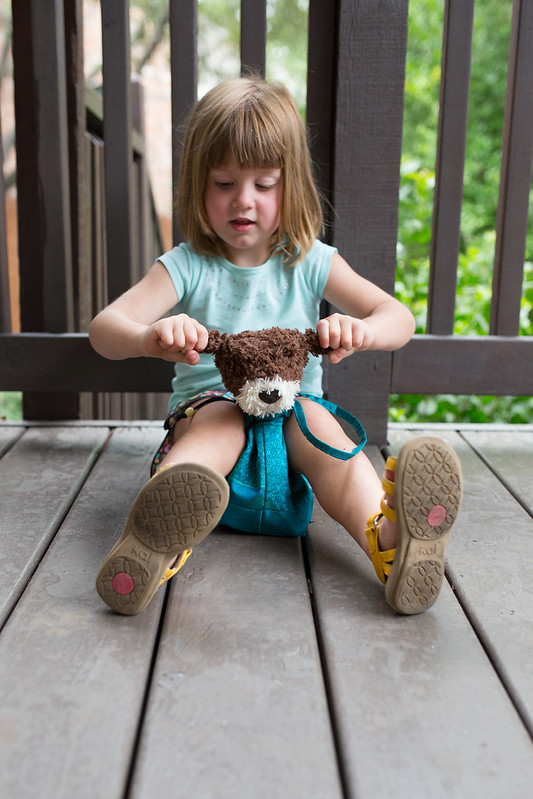 But the thing is, Pete only talks to Iris.  "Let me ask him," she said, like she always does.  Then she looked at him, face to face, and asked, "Pete, do you like when I pull on your ears?" 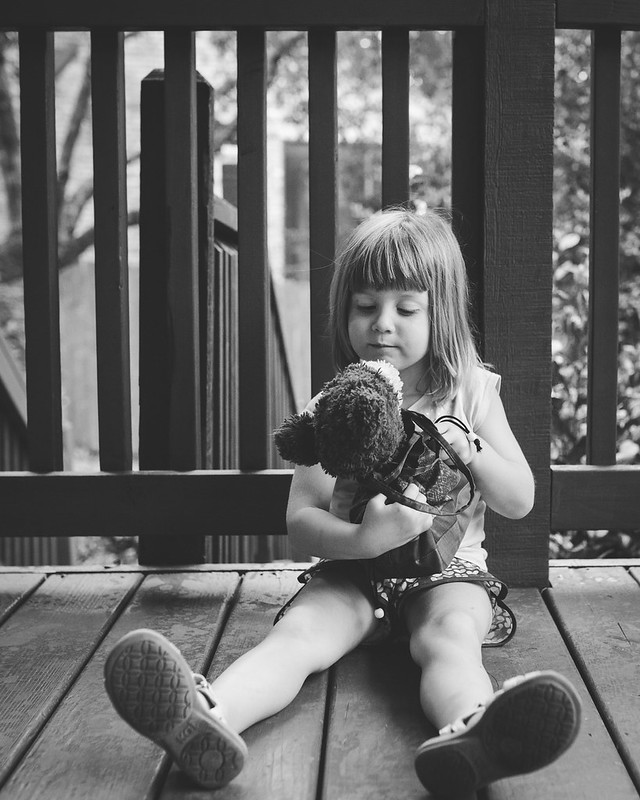 "Pete says he likes it!"  she reported back.

I think she enjoyed my reaction because next she decided to hang Pete over the deck railing. 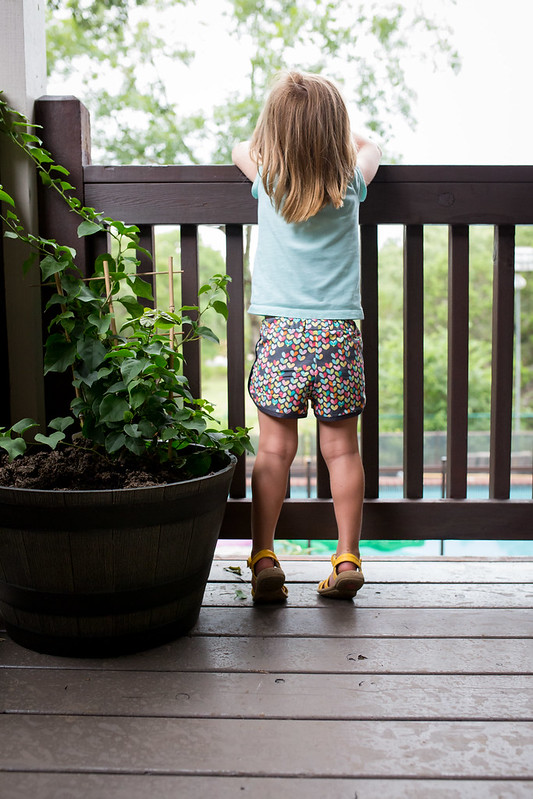 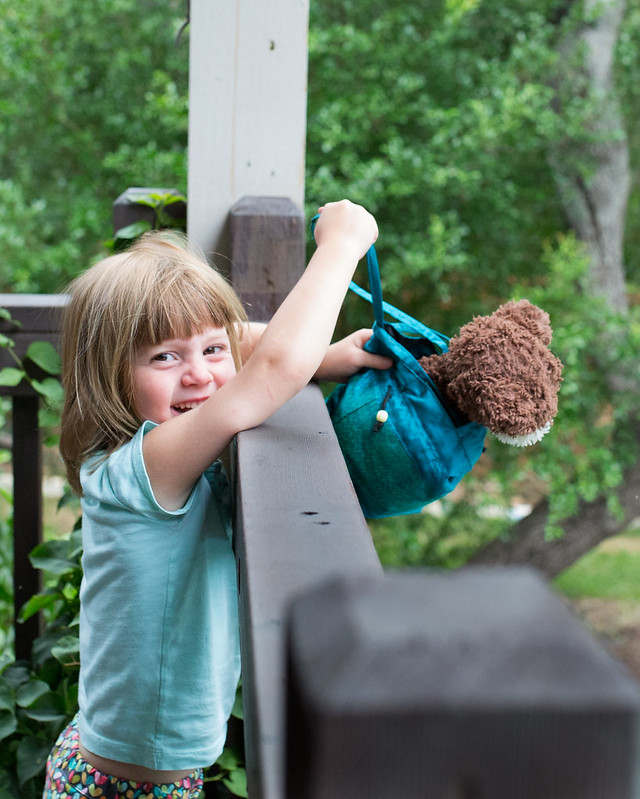 Her final stunt was to hang him up on our planter. 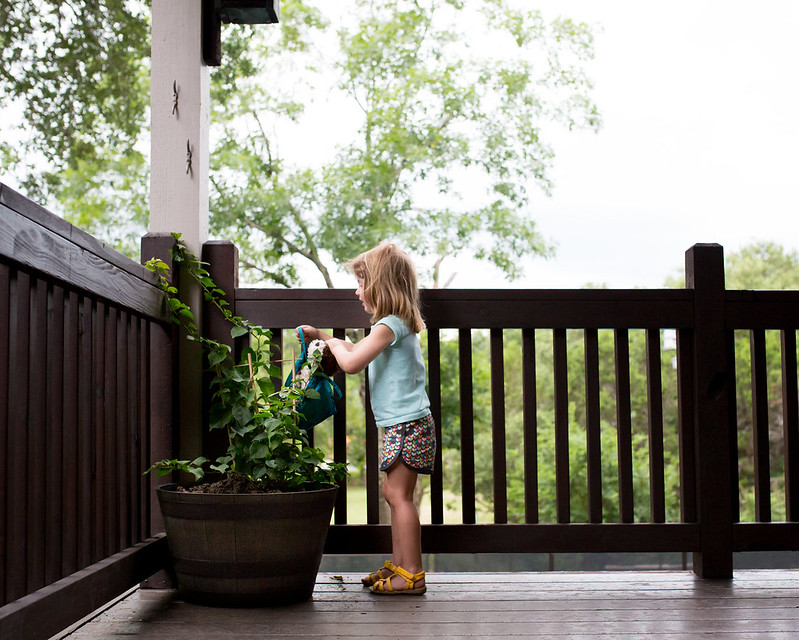 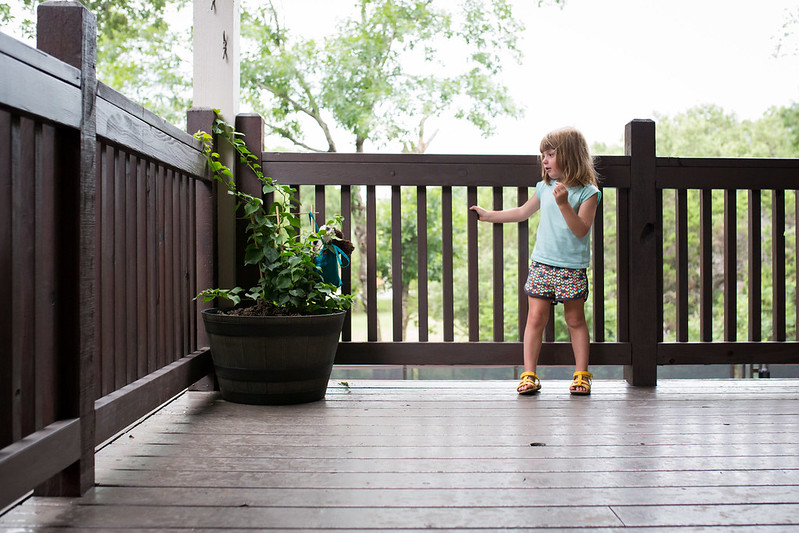 She walked away and said, "See ya later, Pete!" with her eyes closed like this. 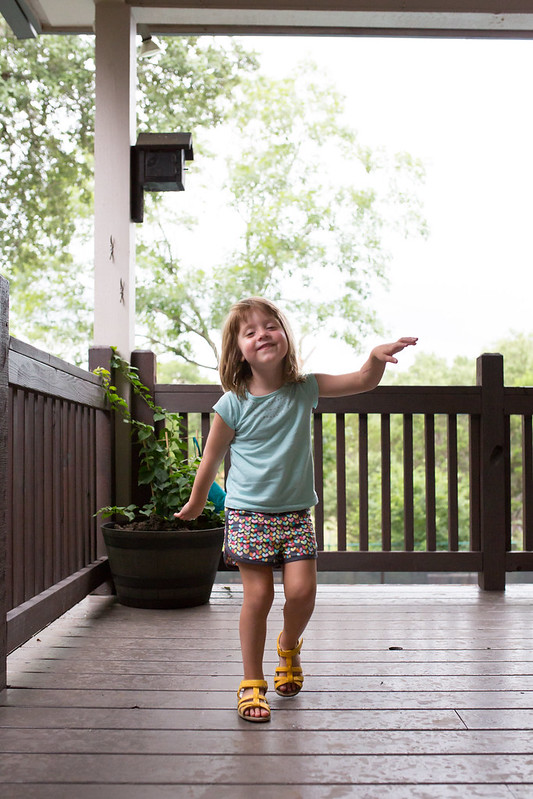 Oh goodness, I don't know what got into her today!  But don't you worry about Pete.  Soon enough he was reinstated to his former status of treasured family member. 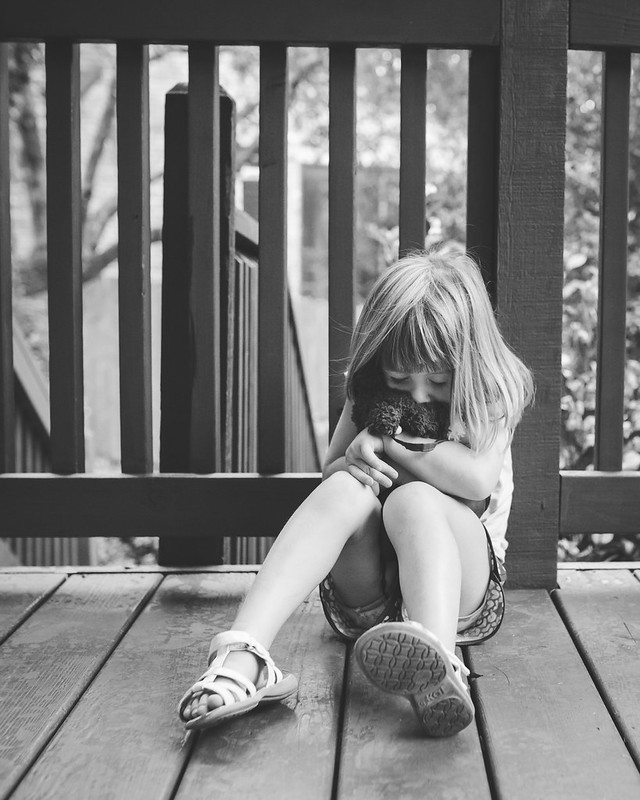 Thanks for the awesome fabric, Tamara!  Iris and I love it!