wherein I admit I have recently become a TV infomercial sucker...

But, first, may I introduce the latest additions to our family -- Sushi and Soup. 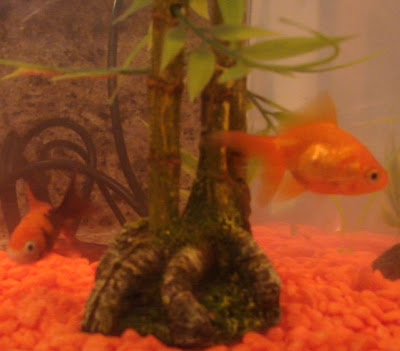 Soup (Jude's fish and named by Jude) is on the left.
Sushi (Indi's fish and named by DAN -- clever, huh?!) is on the right.
I apologize for the horrible picture. My camera was just not cooperating. Now back to my infomercial confessions.
Yesterday I was at the grocery store looking for stickers for the kids and the woman who was helping me told me how Bendaroos are all the rage. We have seen the ads for Bendaroos after Dora in the morning. I am pretty strict about TV watching and we have frequent convos with our kids about how commercials are only trying to sell you things or convince you that if you only had X, you'd be happy.
So, I was talking to Jude about the dangers of commercials when the commercial for Ped*Egg came on. I gotta admit.. I was pretty mesmerized. That weekend, Dan and I were at a sporting store and there I saw it -- Ped*Egg. And I bought it... and it does not disappoint. so awesome that DAN wanted to use it. Seriously. (Disclaimer from DAN reading this over my shoulder, "Hey, wait a second, I have tattoos, drink beer and can use power tools blindfolded. People are gonna get the wrong idea!")
I also happened to see the commercial for Smooth*Away -- "discovered in Europe", "removes hair instantly". So yesterday when I saw it staring me in the face at the grocery store, I thought I should at least give it a shot. I mean, shaving is such a hassle. I always forget to do it. The other night, Dan said he was going to start calling me "Cactus", for Pete's sake!
I figured I could do Smooth*Away while I watched the kids playing, since there's no water required. It would be a win-win for everyone. Unfortunately, my dreaming ended abruptly when I got it home and tried it. I was incredibly displeased. Doesn't work well at all. At least not for me. It was so bad that Dan thought I should return it. (Second disclaimer from Dan, "Please let your blogging peeps know I had NO interest in Smooth Away...not even for for that pesky hard-to-shave place right under my nose.")
So finally, Bendaroos. Bought 'em. Tried 'em today with Jude. Initially, I found them so incredibly frustrating that they made me want to swear.. in acronyms, of course (I didn't, but i wanted to!). But then something happened and they kinda grew on me. Here's what we made. Correction: Here's what I made. The box says it's for ages 3 and up, but I think that's a bit ambitious. Jude is 4 and really good with his hands, but let's just say, I was doing most of the work. 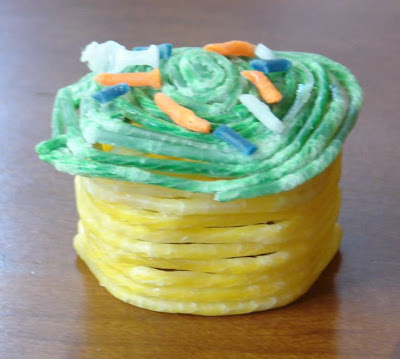 And from now on, I will be turning the tv OFF during those 7 minutes of back-to-back commercials. (Final disclaimer from Dan: "Now hold on, the one-and-only Snuggie blanket where that lady can read a book AND stay under the blanket at the same time looks pretty cool, you have to admit...")