Some of the best (and most hilarious!) conversations we have are around the kitchen table. Here are two recent ones

Indigo: Well that's because I wanted to be the baby again!

Me: So do you still want to be the baby again, or are you glad we have Evie?

This morning the kids were eating breakfast and Evie had carried her favorite stuffed animal out of her crib. She often takes off her shirt in the morning, as you can see below. She's only recently discovered that she can undress herself! :0 It's her new favorite hobby. 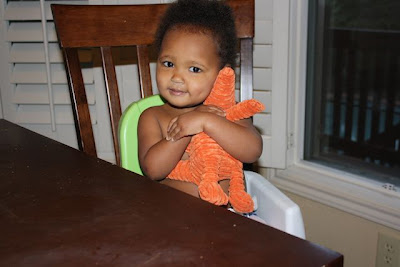 I was feeding her and she pointed to her stuffed animal and said, "Dog!" At this point, she pretty much calls all animals 'dog'. Going along with it, I picked up the 'dog', waved its hand and said, "Hi Evie! I'm dog."

Indigo casually remarked, "Mom, that's not a dog! It's an aardvark."

I couldn't exactly picture an aardvark so I googled it. 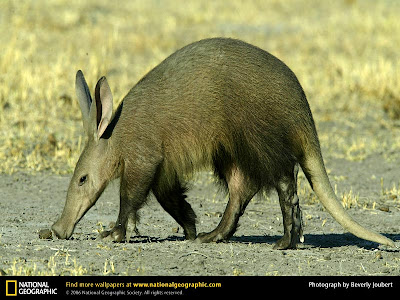 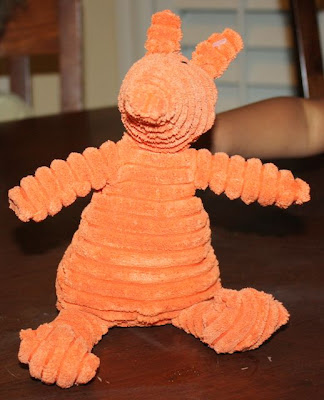 You know, I think it is an aardvark. She must have learned about that one in school! 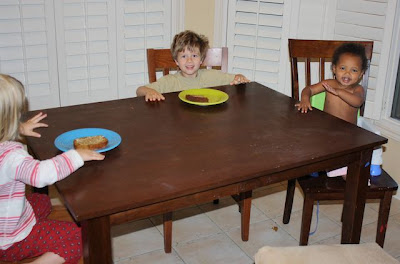 The kids having a drum circle around the kitchen table while I made E's breakfast.

In the above picture, J and Indi are eating slices of the pumpkin bread that I made last night. There is something about fall that brings (for me) a strong desire to cook and bake. I made this bread working off of two recipes. The first is the totally granola, very little sugar version and the second is of the "this should probably be renamed 'pumpkin cake'" variety (which I might add got rave reviews on allrecipes.com) I combined aspects of both, which I think came together nicely to make a healthy, but not hippie-healthy, pumpkin bread that was a big hit around here. Here's what I did (this makes one loaf)-


1/2 cup canola oil
2 eggs
1/2 cup maple syrup
1 cup canned pumpkin
1 cup all-purpose flour
1/2 cup whole wheat flour
1/2 cup brown sugar
1 1/2 teaspoon baking powder
3/4 teaspoon baking soda
3/4 teaspoon cinnamon
3/4 teaspoon nutmeg
3/4 teaspoon ground cloves (some people don't like this much clove, but we liked it)
I combined the wet and dry ingredients separately, then mixed them together quickly, without over mixing. I popped it in the oven at 350 F for about an hour. We ate half of it as a before-bedtime snack and the other half as breakfast.