Yesterday was Jude's first day of first grade.  It was also his first time doing a traditional school day, since he attended a kindergarten in which the days alternated in length between 3 and 5 hours. 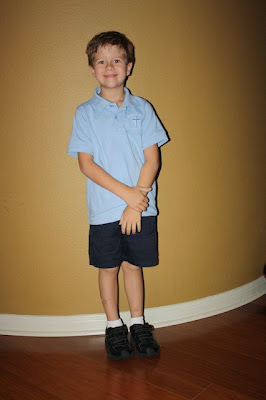 This child is living proof that independence really can come through initial dependence.  For the first three years or so of Jude's life, he practically wanted to crawl back into my womb to live.  He was so timid and fearful.  He lacked confidence.  He shied away from groups.  He literally trembled when I left him.

As a first time parent, I worried that his behavior was the result of my parenting.  We were 'attachment parenting' for lack of a better term and other parents would comment that we needed to leave him more often or push him into independence.  Little things, like our decision not to leave him in the church nursery, were examples to others of how "overprotective" we were.  Still, pushing him into independence didn't feel right to us.  Some nudging, perhaps, but we wanted him to blossom in his own time. 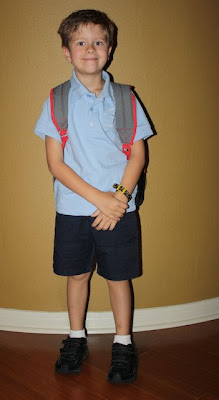 And blossom he did.  At the end of his kindergarten year, his teachers told me that one phrase they had never heard from Jude was "I can't."  This once timid mama's boy is now eager to try new things.  He was enthusiastic about going to a brand new school, about meeting new friends. (Can I admit that I was the one with butterflies in my stomach?) 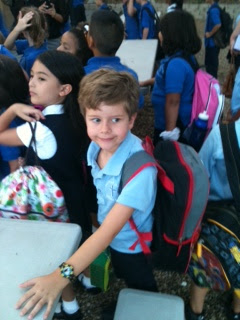 While he had a bit of trepidation when Dan finally said goodbye, by the time I picked him up he had worked through it.  I asked him how he liked school and he exclaimed, "I loved it!"  I then asked if this meant he doesn't want to do homeschool.  He sighed and rolled his eyes, "Mom!"

I guess that's a no for now.

I share our story in case others are in the same position as we were a few years ago.  If you are blessed with a child who others might label 'clingy' or 'high maintenance'  know that you don't have to push the child away to make him independent.  Children all develop in their own time, at their own pace.  Every child's personality is different.  I'm learning now more than ever that parenting is not like following a recipe.  Even though we parent our kids in the similar way, all three of them have distinctly different personalities, which result in distinctly different challenges, strengths and needs.

We live in a society that values rugged individualism.   So much so that these ideals are placed on children as young as babies.  We have found that when you nurture the seedling, allowing for dependence, the bloom is sure to follow... in its own time.

And it's oh so beautiful to see.