The (mis)adventures of a pre-schooler (by Dan)

Truth be told, I have a reputation for being Captain Safety.  Granted, there is a fine-line between reasonable levels of parental caution and helicopter parenting so while I keep things reasonable (at least I think I'm reasonable...the kids may have another opinion), there are some non-negotiables:

However, there are somethings you can't prevent.  Kids will be kids.

So if you have a weak stomach, don't scroll down.

One of the things that I'm constantly telling the kids is to get off of the arm of the couch or the back of the couch.  Heretofore, I have been more concerned about the couch.  We have an overstuffed leather deal that has survived a Great Dane, a Rhodesian Ridgeback and four kids.  Apparently it is at lot of fun to play on / with.  I can only vouch for it's amazing nap inducing qualities.

I was not, however, prepared for this possibility when Tarikua fell off the arm of the couch.   (I only wish it were April fools and I was really good with Photoshop.) 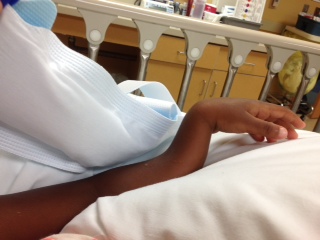 As soon as I saw her arm I called out to Rachel, "Broken arm.  We need to go to the ER, now."
Rather than wait for the three older kids to find shoes and pile into the car, our awesome next door neighbors (thanks, Martin and Caryn!) drove Tarikua and I to the ER.  Rachel then called our neighbors across the street (thanks, Ken and Cindy) who watched the kids so Rach could join me in the ER since all Tarikua wanted was Mama's love.

It happened at 8:25 and by 8:50 she was in the ER, with an IV in her arm and a shot of morphine flowing through it (it's amazing how an arm at a unnatural 75 degree angle will help you jump to the front of the line).

Medicine is crazy now.  The ER contacted the pediatric orthopedic surgeon on call who looked at the X-rays from home and made the decision that they would use general anesthesia given the possibility she would need pins.   Since she had just eaten dinner an hour earlier, they decided to wait until the morning.  They splinted her arm, kept her on pain meds and by zero-six-thirty the next day she was in the OR where they set it...thankfully no pins. Not even 48 hours after getting out of the hospital, these flowers arrived from my parents who live in Florida.  Cutest arrangement I've ever seen.  Thanks Grammy and Grampy! Tarikua, you're one tough cookie, kiddo!  I'm proud of you.