I don't normally like to play favorites.  But I have to admit, this dress is one of my favorites. 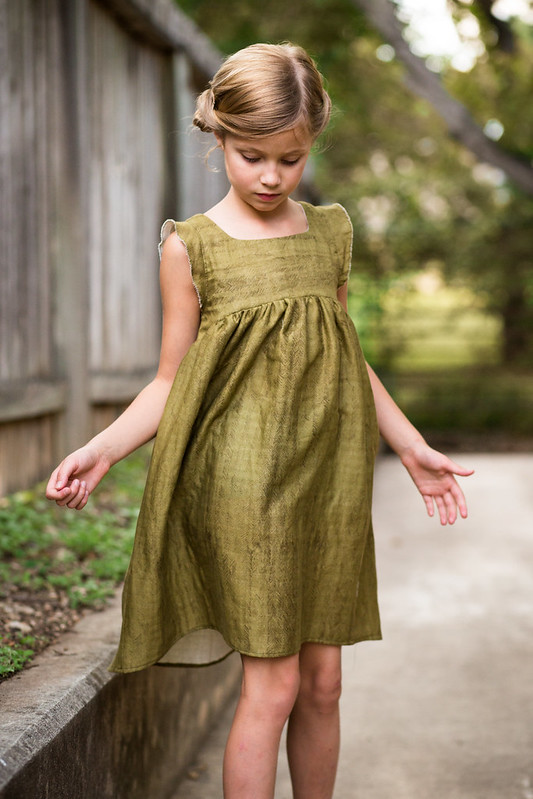 It's the Bohemian Babydoll Dress. 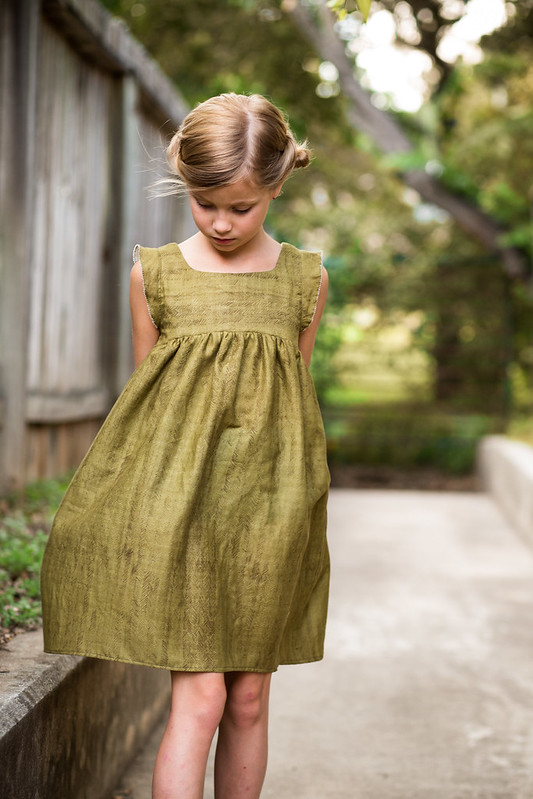 Heidi from Elegance and Elephants sent it to me as part of her informal pattern tour. 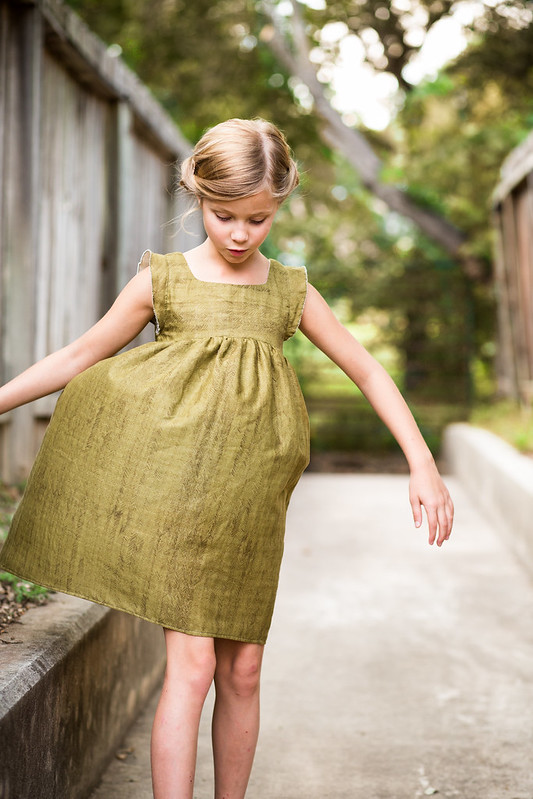 I was immediately drawn to the curved (high-low) bodice and high-low hem.  I've been seeing the high-low bodice on Pinterest and had wanted to replicate it.  But it's so much easier when the pattern has already been drafted by someone else.  And, lucky for me, this was. 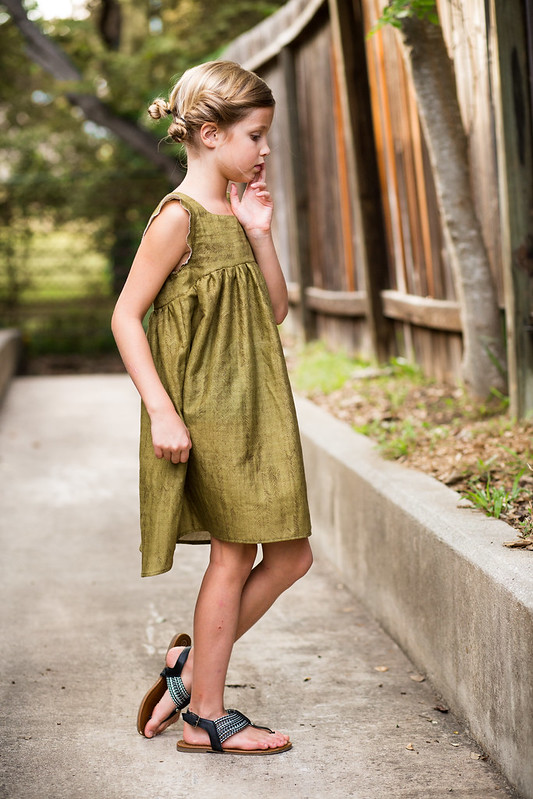 The pattern has a flutter sleeve option as well as a sleeveless option.  But Indigo has something against flutter sleeves.  She thinks she's too grown up for them and that they remind her of the characters from a Beatrix Potter story.  (???) 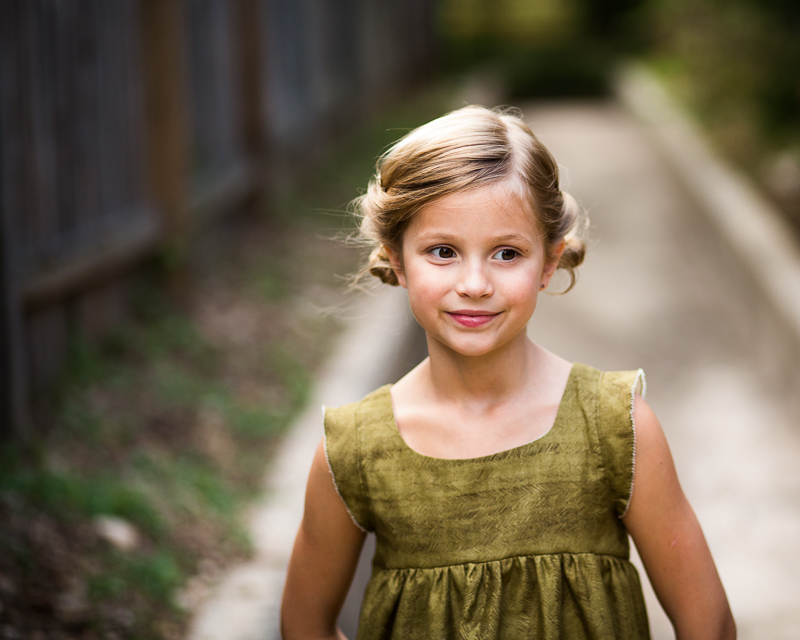 I could have gone with the sleeveless option, but instead opted to draft a sleeve like this one. 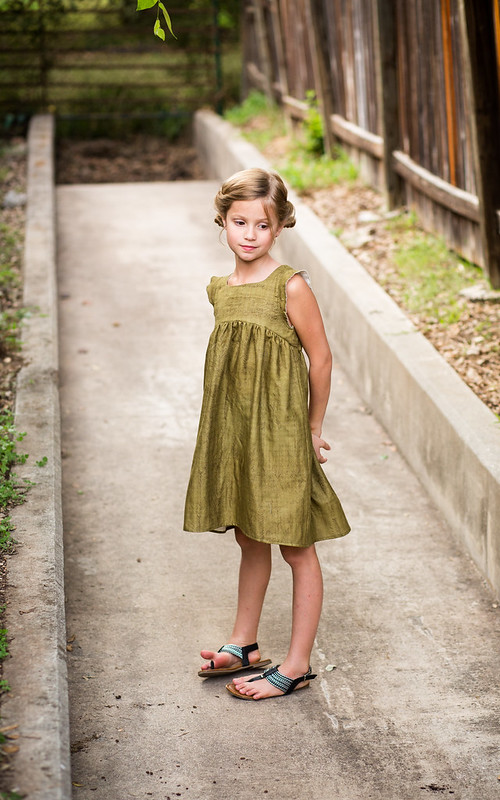 To make it fit, I also altered the bodice ever so slightly.  Actually, Dan sketched it out for me while I ran an errand.  He's the best!  :)

The inside orange line (below) is the line of the original pattern.  He simply softened the curve. 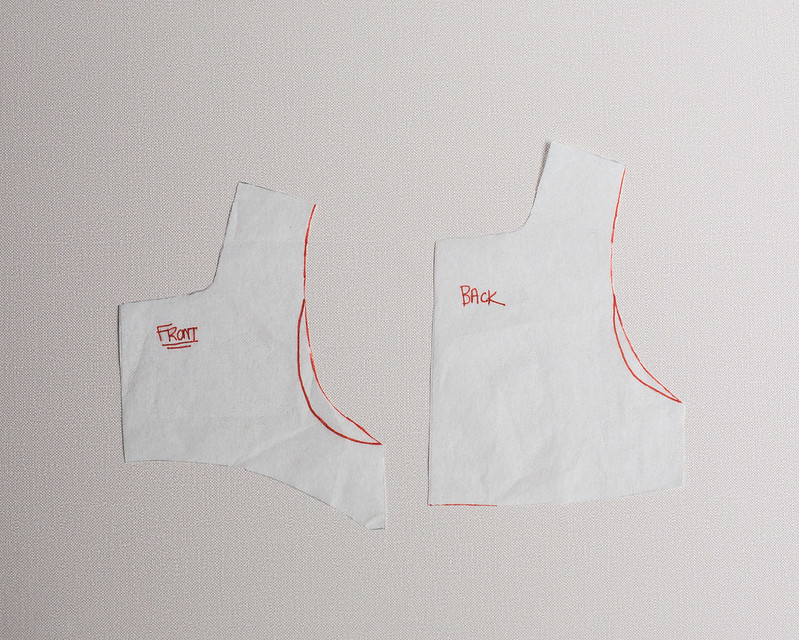 Then we altered the sleeve so it looked like this. 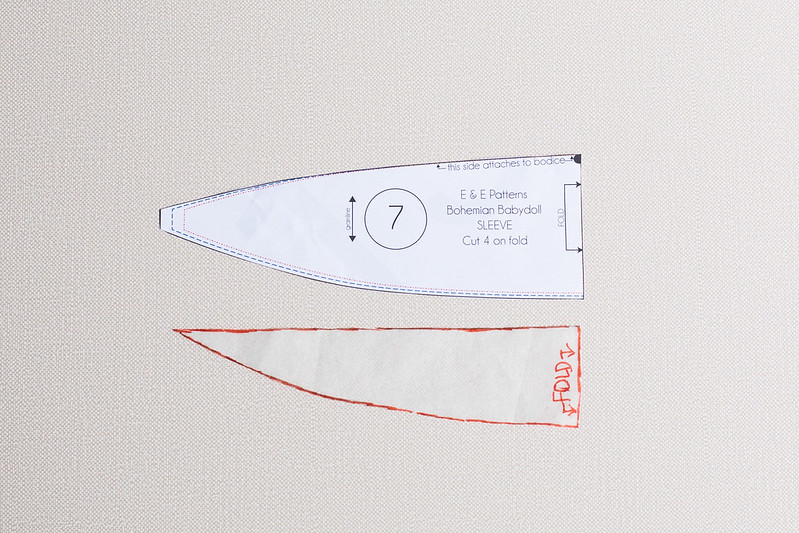 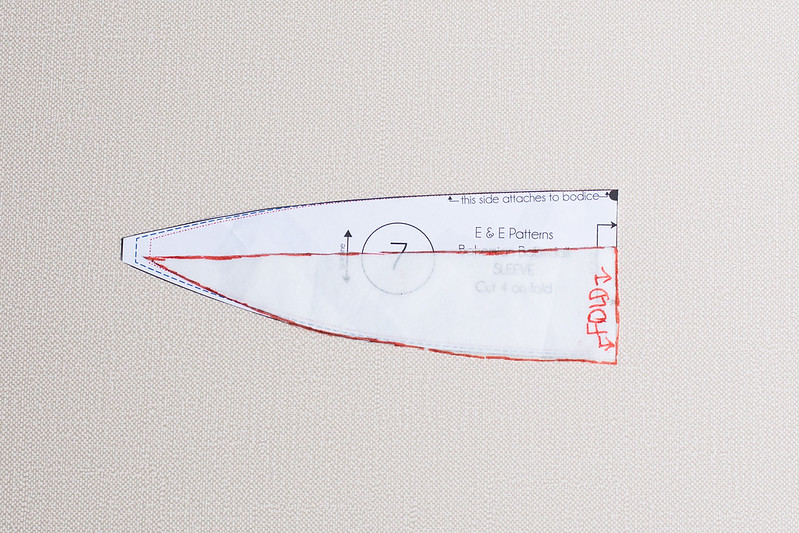 Coincidentally, Heidi told me today that she's writing a tutorial for a sleeve that looks similar to this one and hopes to publish it near the end of the week!   So keep an eye out for that on her blog if you're interested.

I think this fabric was made for this dress pattern.  It's a Nani Iro double gauze that I ordered from the Etsy shop Miss Matatabi.   I had some questions about my order and Frances, the shop owner, provided the best customer service.  She was so awesome to work with.  It was such a positive experience. 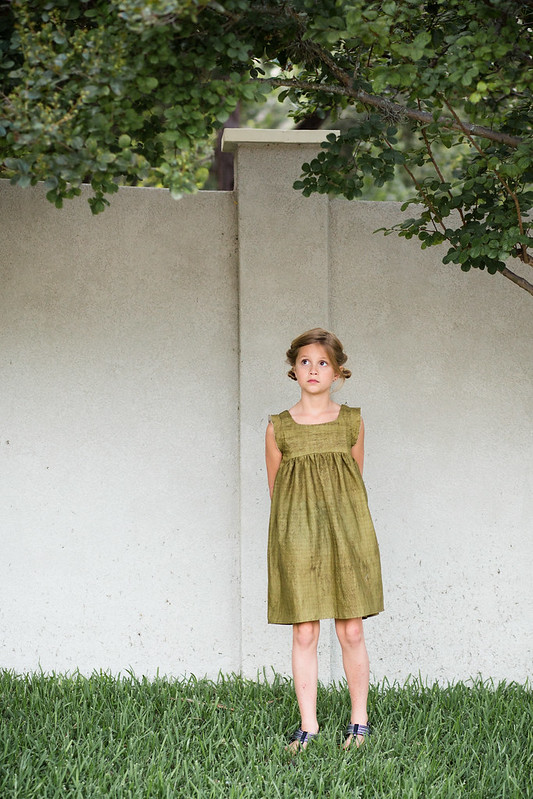 I haven't used a double gauze in a long while and it feels like it has only improved over the years. This stuff was a dream to work with.  And it's so gorgeous on.  It's so light and airy and cloud-like.  I don't know why I want to use the adjective 'cloud-like' other than that it just seems to fit.  Voile is also light and airy, but it's slinky and hangs more limply than double gauze.  Double gauze is more floaty. 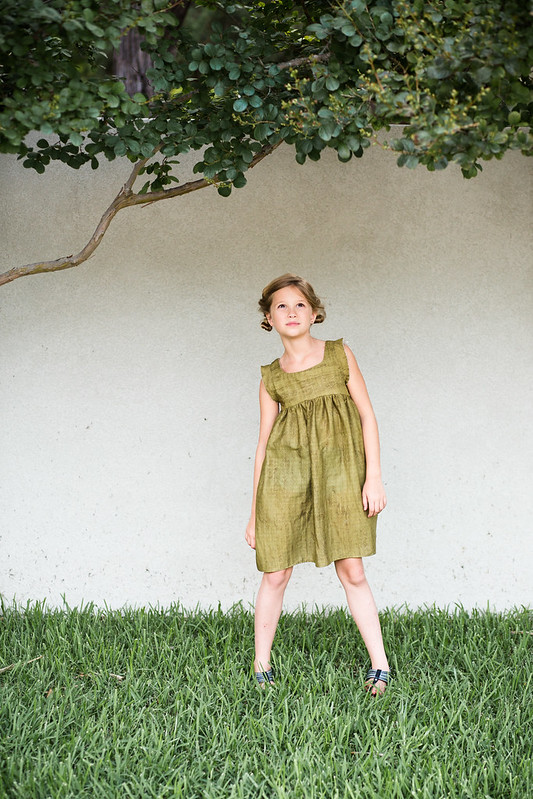 I don't know what it is about this fabric that makes it really hard to photograph.  It almost looks like a silk dupioni in these photos, but it's nothing at all like that.  And it doesn't have any sheen to it.  The finish is quite matte. 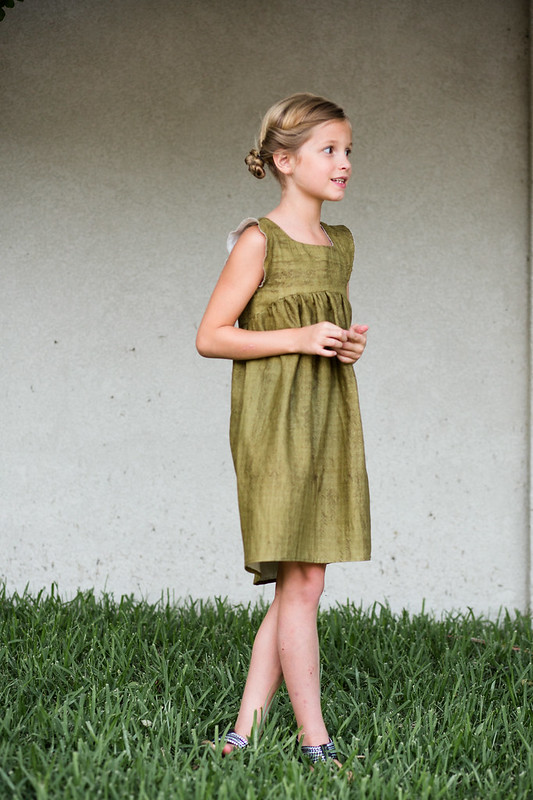 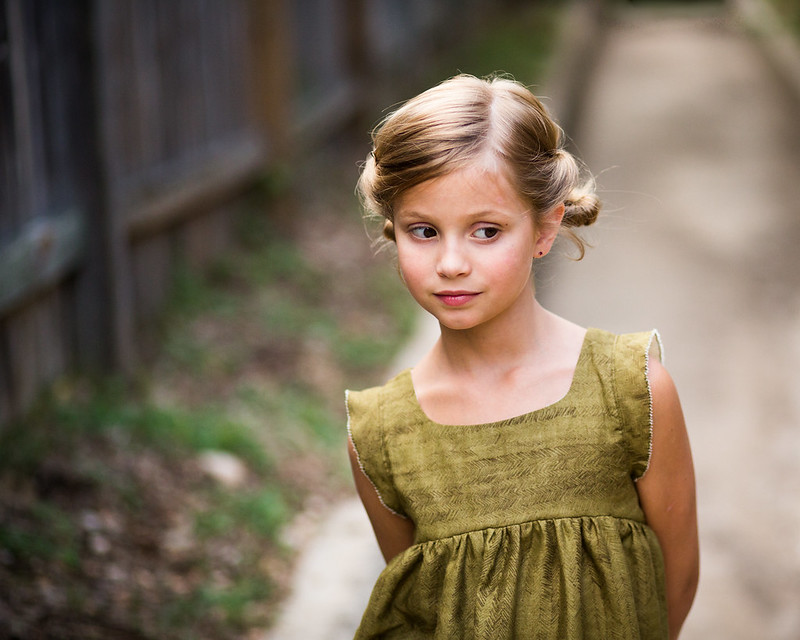 One of the great details of this pattern is the contrasting hem facing.  I did try to add it to this dress, but it added both a physical and visual weight that I didn't love with the double gauze.  It felt too heavy for this particular dress.  So I removed the hem facing and finished the dress with a narrow hem instead. 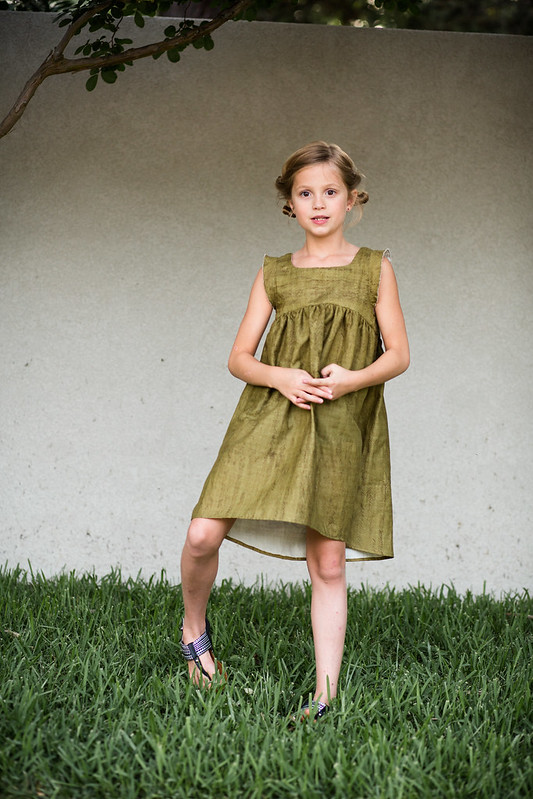 Having made Indigo several dresses that were bordering on being too short, I was careful not to make that mistake again on this dress.  After measuring her,  I cut the skirt in a size 9 whereas I cut the bodice in a size 6 width and size 7 length.  Indigo is 7 and so tall and lean.  The fit was perfect this way. 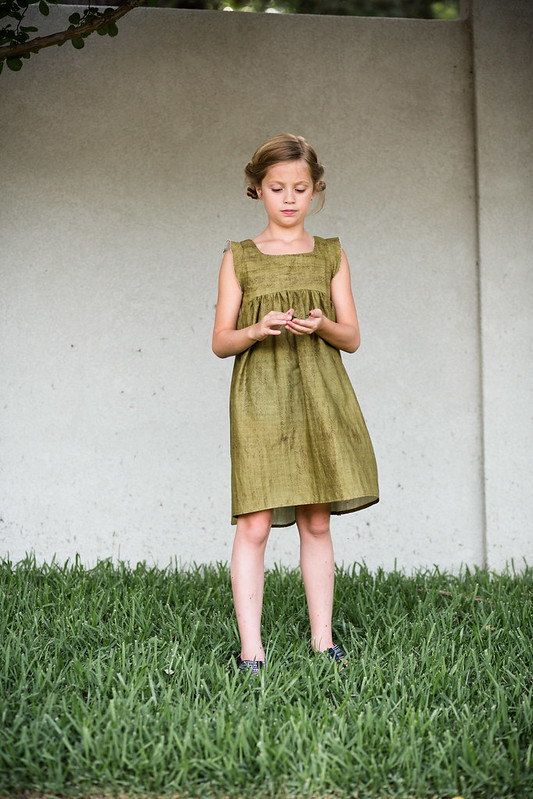 Another interesting detail about this dress is that there is no back closure.  It simply slips on over the child's head.  I was really skeptical about how it would fit without a back closure.   Would it gape?  (Wouldn't it have to?)  Would the dress slip off the shoulders?  Somehow the fit is perfect with no gaping or slippage.  That's some impressive wizardry if you ask me! 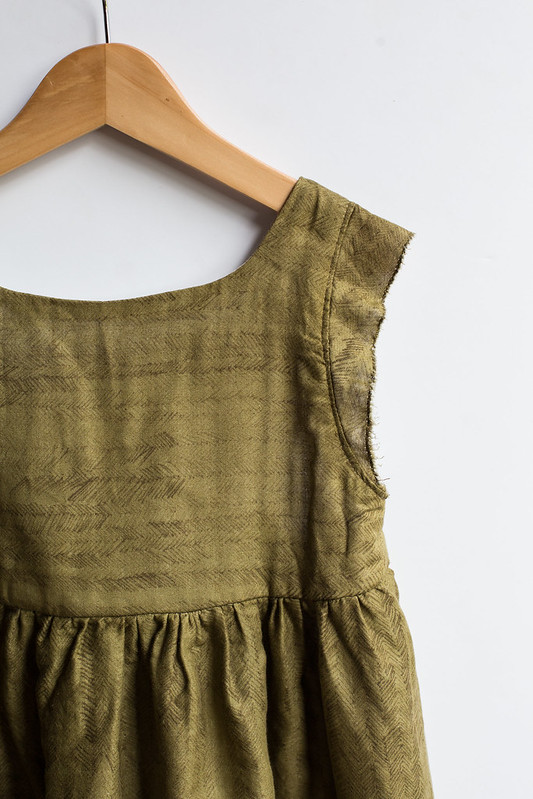 back bodice - no closures!

I really love this pattern! 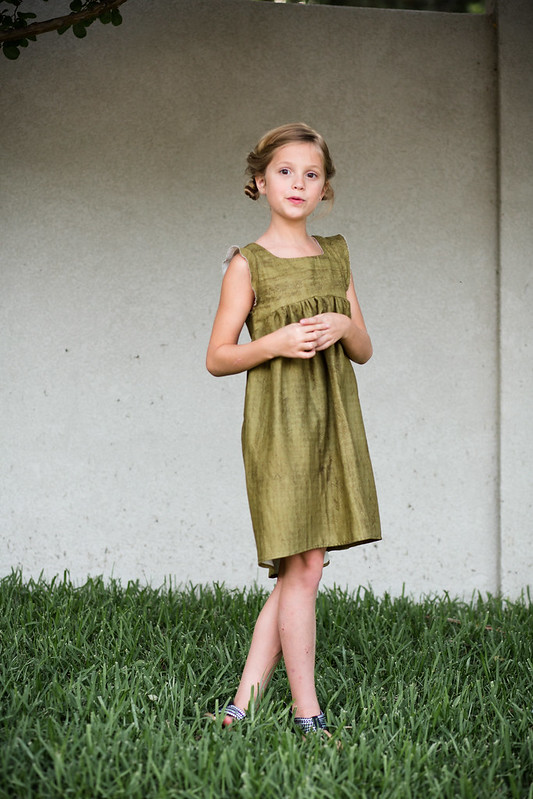 I'm also loving the big kicks and sweeping movements of the third trimester. 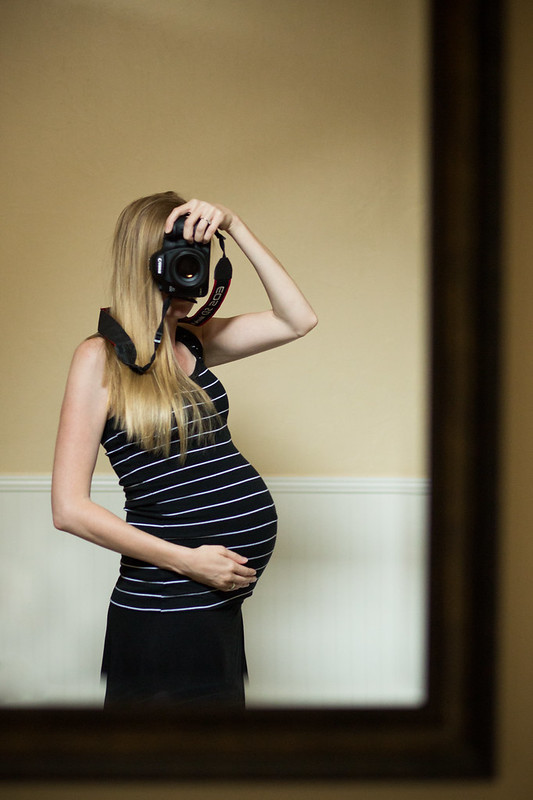 I'm 34 weeks already.  I can hardly believe our baby is due in only 6 weeks!  We're all so excited to meet her while also enjoying what is right now. 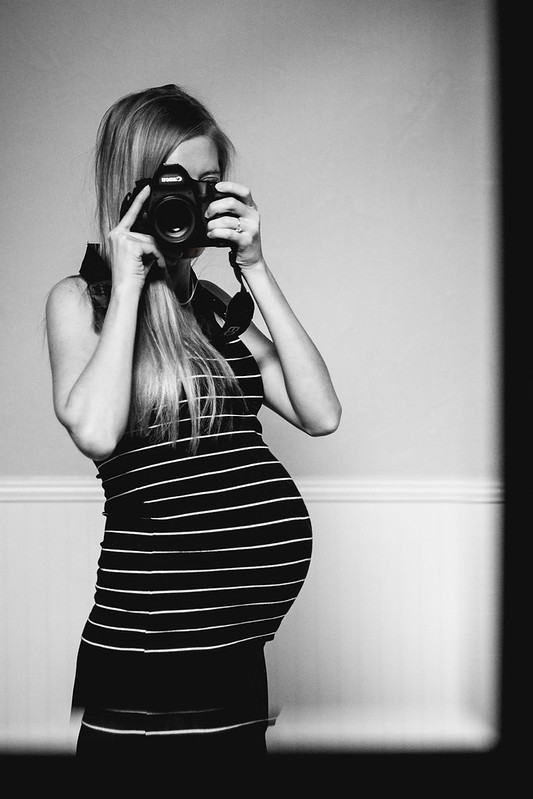