On Expectations, Motherhood, and Brindille and Twig Bloomers

I've heard it said that with your first baby you take a million photos, have a perfectly put together baby book and chart every milestone.  But by your third(ish) child, the kid's lucky if they have their birthday photos taken. 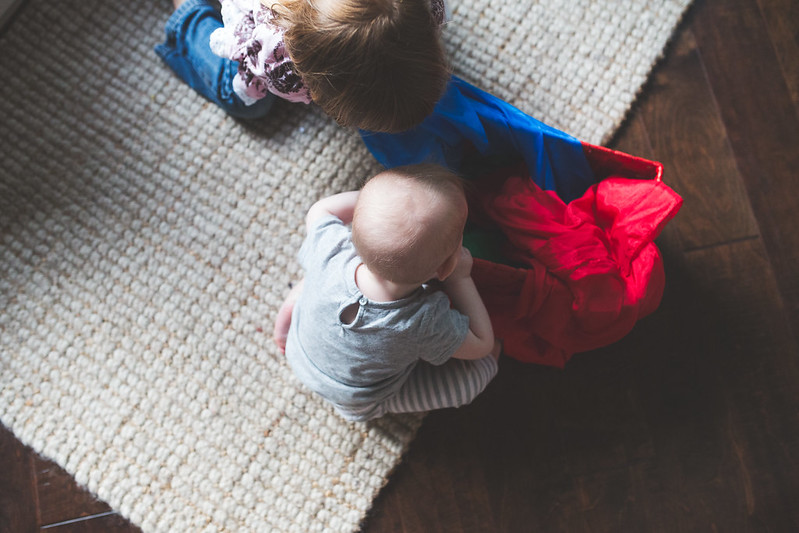 In my case, however, I feel almost the opposite has been true.  When I first had Jude, I was so overwhelmed by the enormity of motherhood I felt like I couldn't keep my head above water.  It was like I was drowning.  I was pretty much holding on for dear life. 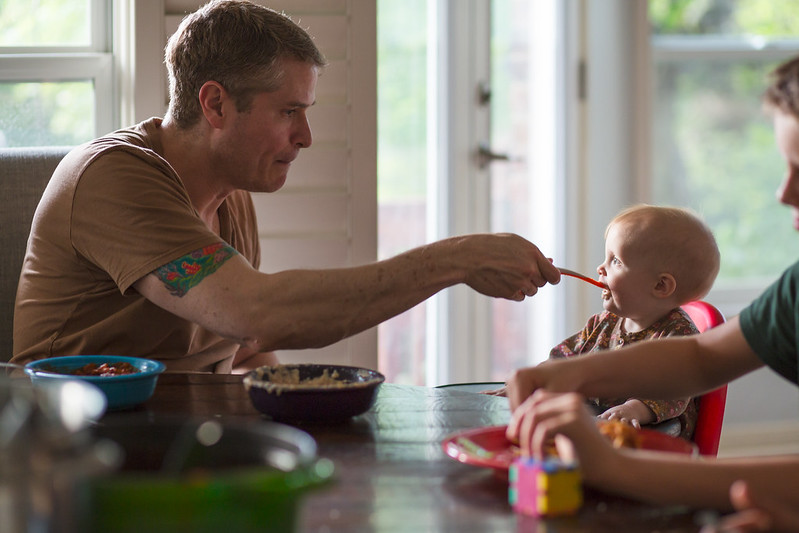 Before I had kids, I worked as a researcher and teaching assistant at a university.  I had graduated in finance from a top ten business program and was easily working 60 hours a week.  I remember my former boss and I used to joke about how stay-at-home moms claimed to be 'busy'. Har har Because, after all, they had looooooaaaads of free time. 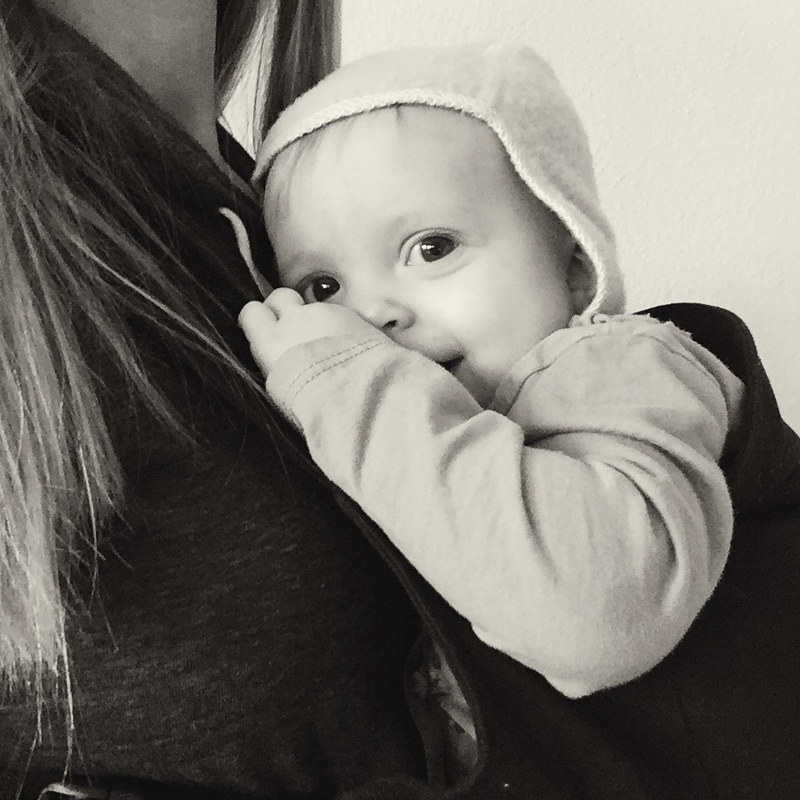 Ooooh yes, the karma police got me back good for that one, rest assured.  ;)  Even now with five kids, where having only baby at home would feel like a vacation, I do not forget how difficult that transition was.  I really do empathize with struggling first-time mamas.  I vividly remember being one myself. 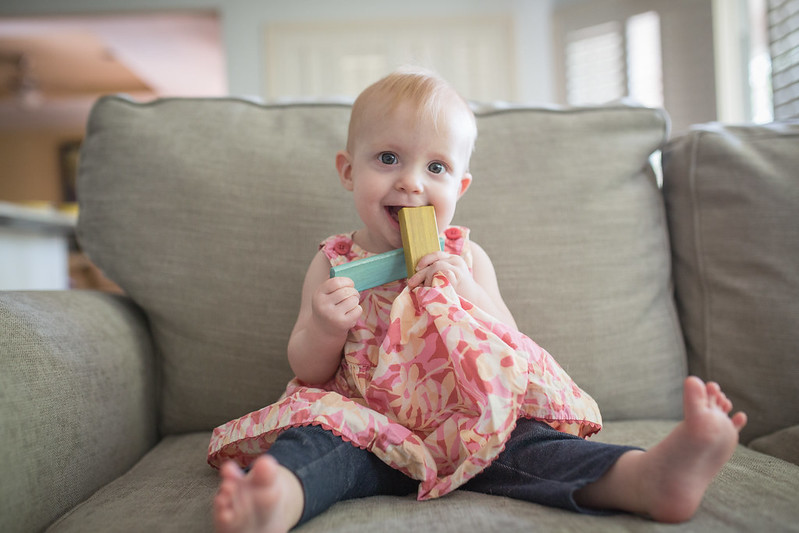 I think a big part of my difficulty acclimating then related to my expectations.  Expectations rarely end well.  Am I right? 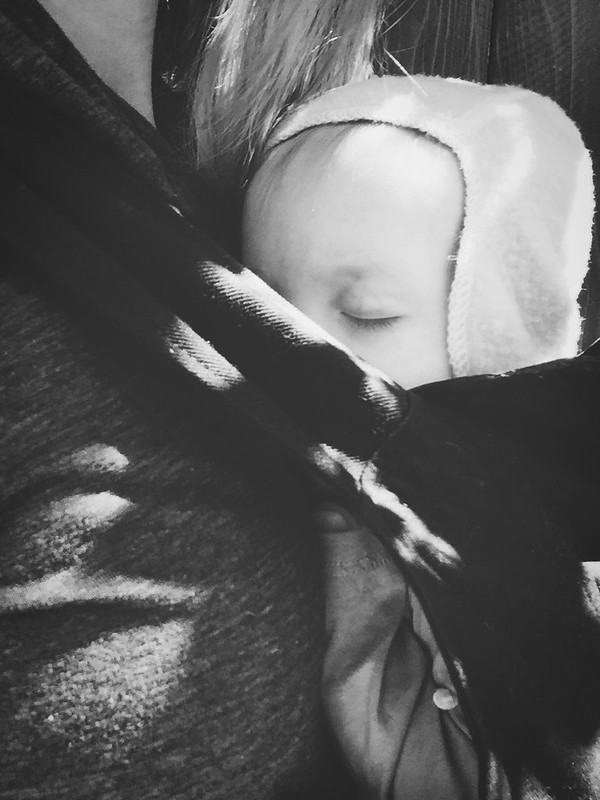 For instance, I expected that my babies would sleep through the night by 6 months old.  I expected that they would nap for two hours, twice a day.  Apparently there are people out there who have babies like this because they loved to tell me all about them.  I happened to be lucky enough to have one like this : Tia.  And thank the Lord for that, because man, was that glorious.  But otherwise, I am quite certain at this point that Dan and I genetically do not create such human beings. 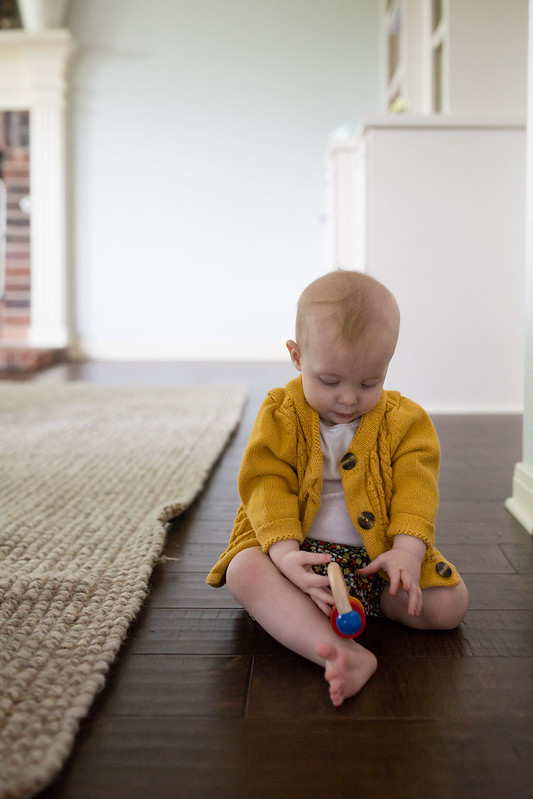 All of those expectations set me up for disappointment.  Where I had hoped for encouragement from others, I often received blame.  It is one of the reasons I am so, so thankful that Tia was an incredible sleeper, because it finally vindicated me from the accusations that it was otherwise all due to my faulty or indulgent parenting. 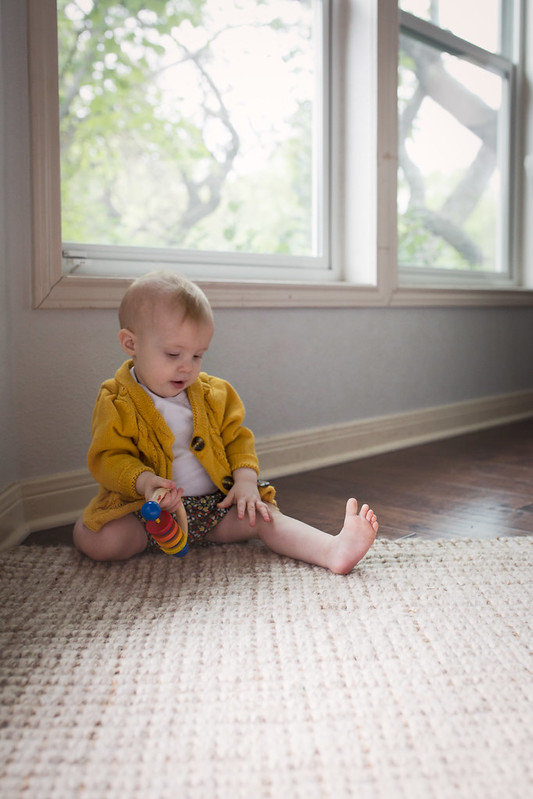 By the time Tia joined our family, I finally let go of my expectations.   And it was totally freeing. I accepted my kids as the little people they were created to be, even if they didn't fit our societal definition of being 'good' babies. (A study of Ethiopian babies showed that the most demanding babies had the highest survival rates, perhaps turning these cultural assumptions on their heads.) 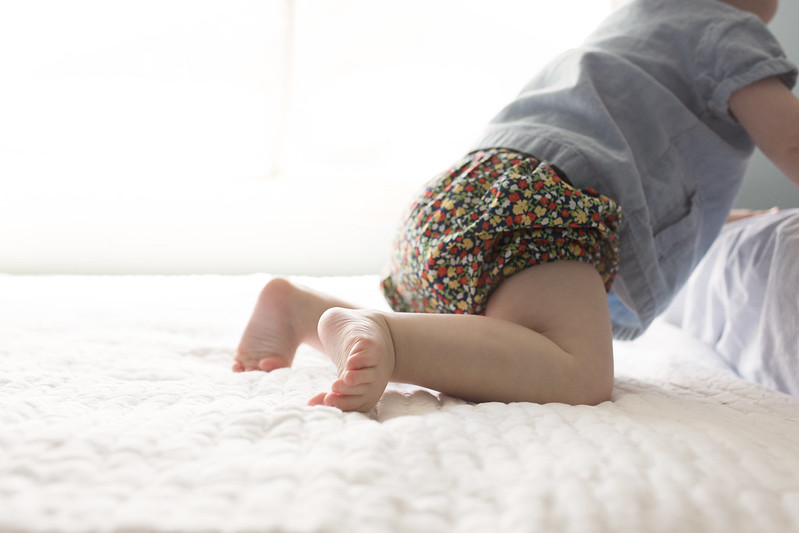 When I was open to seeing my days as they were rather than how I felt they should be, it opened me up to the beauty of our everyday.  Where I once felt like what we were doing was insufficient, I now had a cup that was overflowing with joy and love.  And I realized how wildly fulfilling motherhood can be. 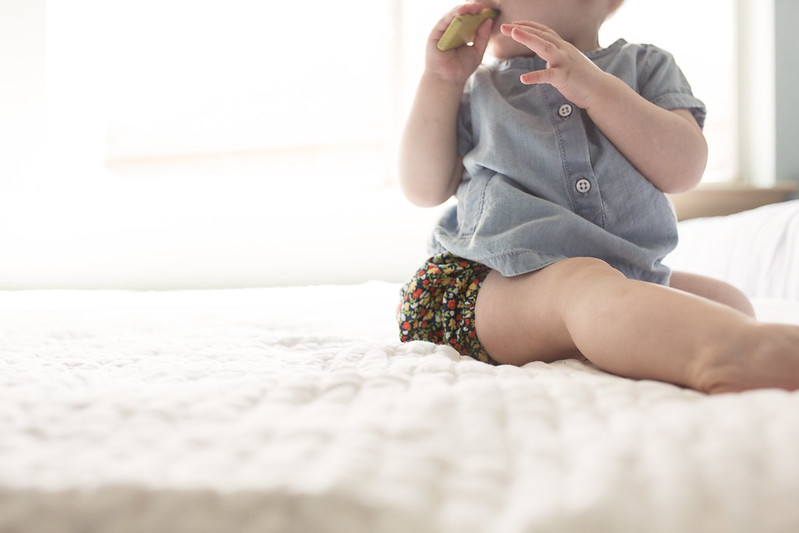 Now that Jude is 10, I am so aware of how quickly the time passes, even though those early days of motherhood really did feel like they might last forever.

I'm also aware of how hard it is for me to remember, at least pictorially, my children's baby and toddlerhoods.  I'm surprised at how much I have forgotten, but thankfully I have my kids, who fill in some of  the gaps for me.  :) 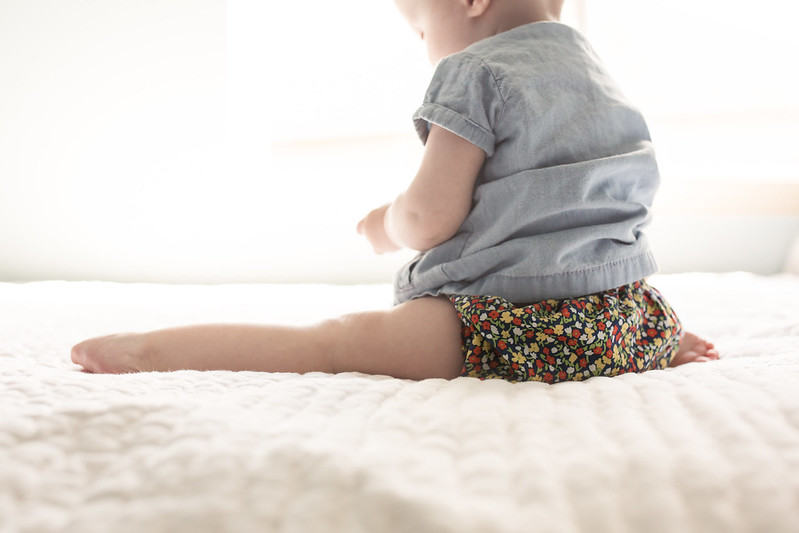 It does motivate me to take more photos, especially during these early years where they change so much so quickly.  It inspires me to capture the details, like her tiny hands and sweet baby toes. 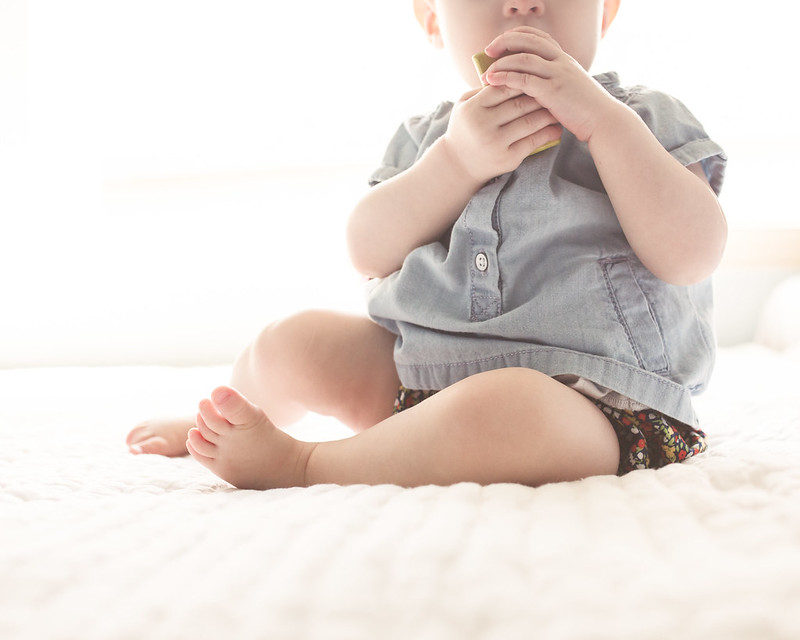 Or her mohawk-esqe strip of hair that we all love so much. 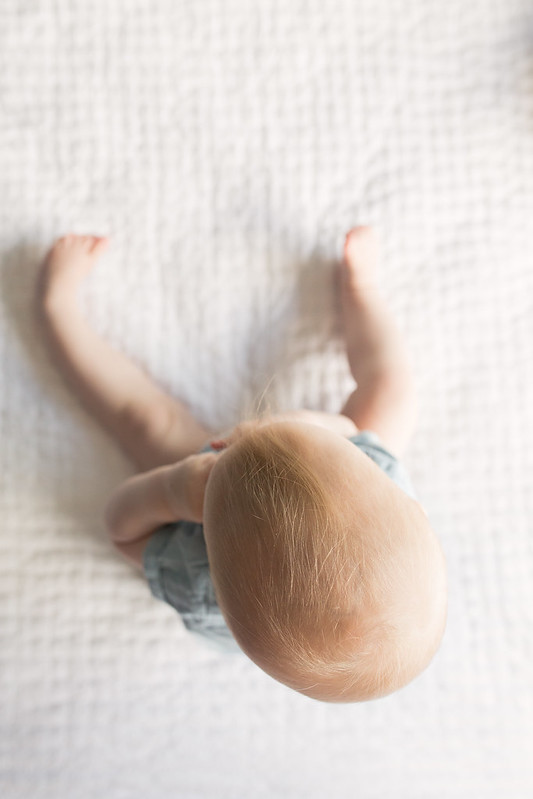 And it's pretty cool that photography is having a moment right now, with DSLRs being so incredible and even our iPhones are downright amazing.  I am loving learning iPhoneography and capturing moments like this one that I would never have previously captured with my DSLR.  I only wish I would have had the technology back when Jude was a baby. 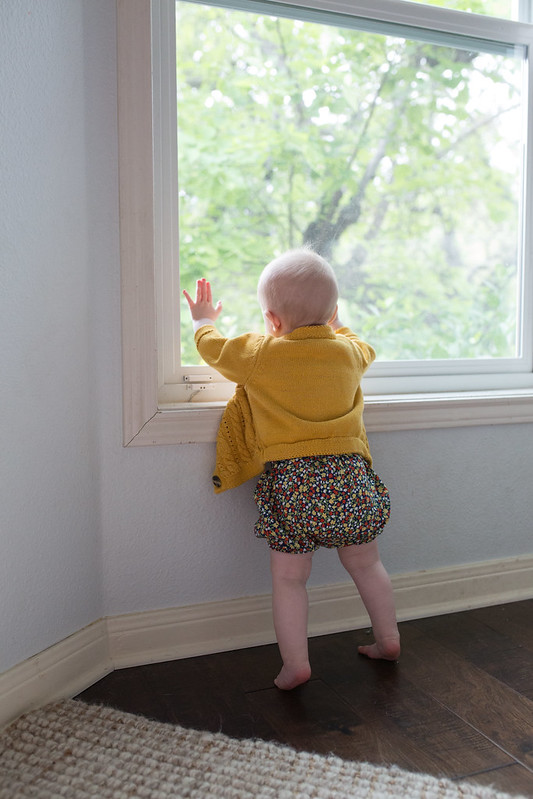 Hazel is nearly three weeks past her 8 month mark, but sewing these bloomers for her was the perfect excuse to finally get around to doing an 8th month photo shoot. 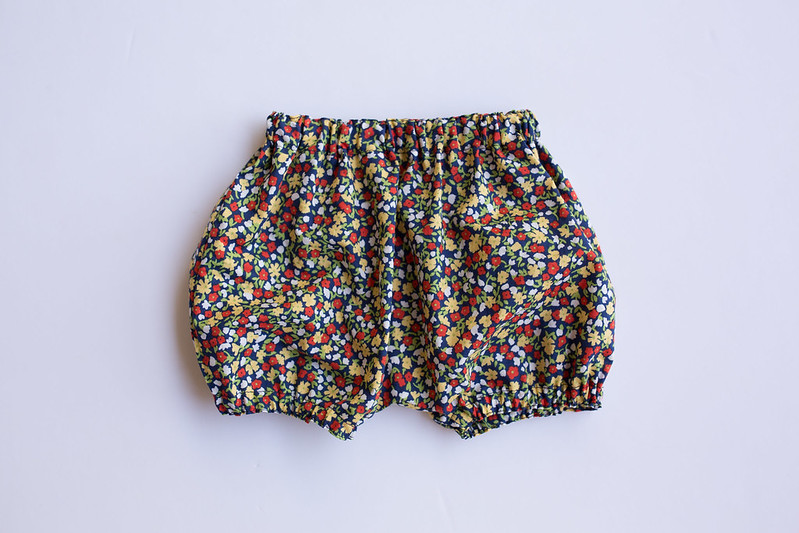 Man, this might be the toughest age to photograph!  She's not yet walking, she's a total wiggle worm, and she refuses to lay on her back.  After attempting a photoshoot on the bed, we took a break for lunch.  During this said break, Iris decided to be a hero and feed Hazel her most coveted snack : chocolate chips.  That required a wardrobe change and I scrapped the whole idea I initially had and decided to capture her in her element instead. 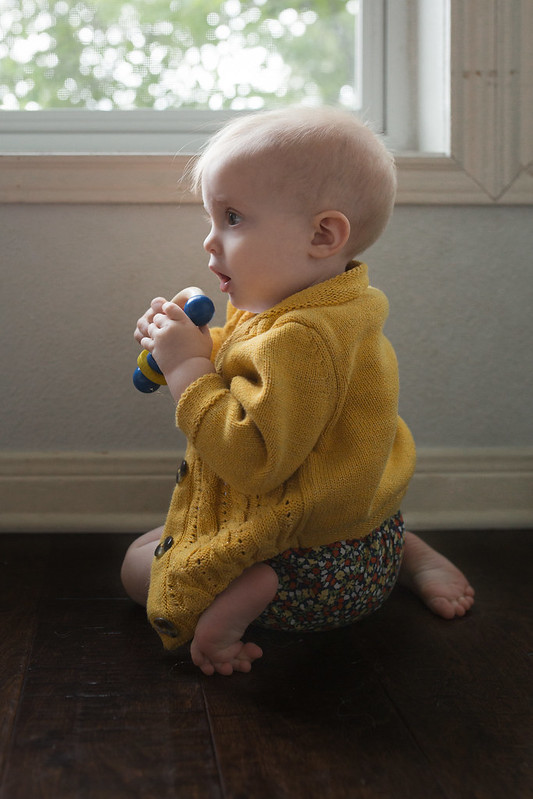 The girl is on the go.  She is very curious and loves to look under furniture to see what her siblings may have left behind for her to discover! 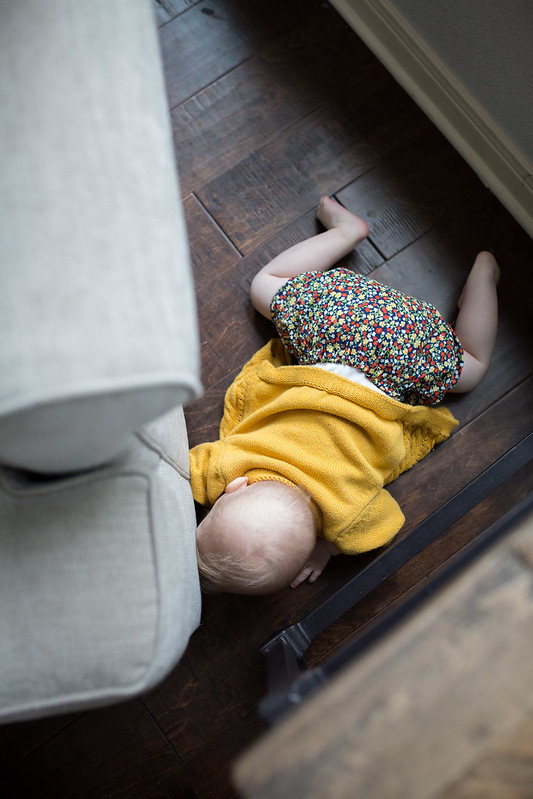 In this particular instance, she threw her rattle under the couch and then peeked under to find it again.  Sometimes our black lab does that with his ball.  Both make me laugh! 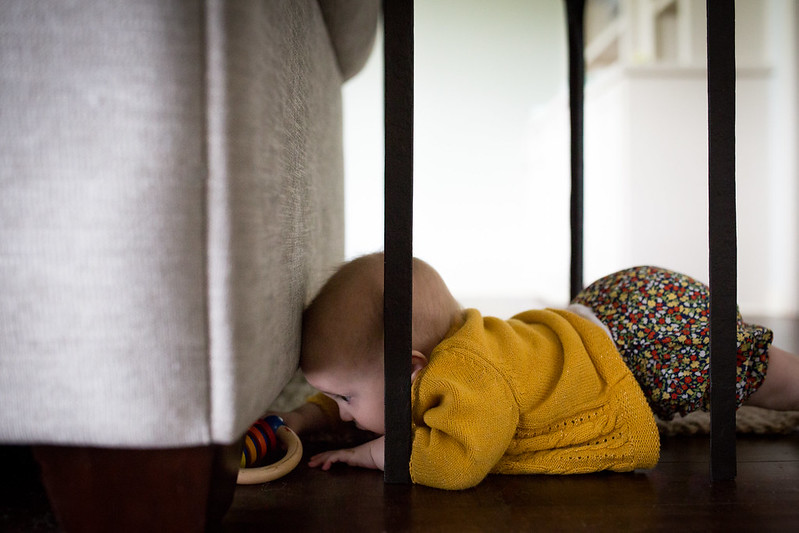 I really like these bloomers.  There's definitely an emphasis on the bloom - they're kind of like bubble shorts.  I might reduce the width a bit next time to make them a little less bubbly.  Not sure.  I'd also add an inch or so to the rise.  I like a higher rise on bloomers so that it covers her diaper and tights if she's wearing them.  Even the store bought ones aren't quite high enough for me. 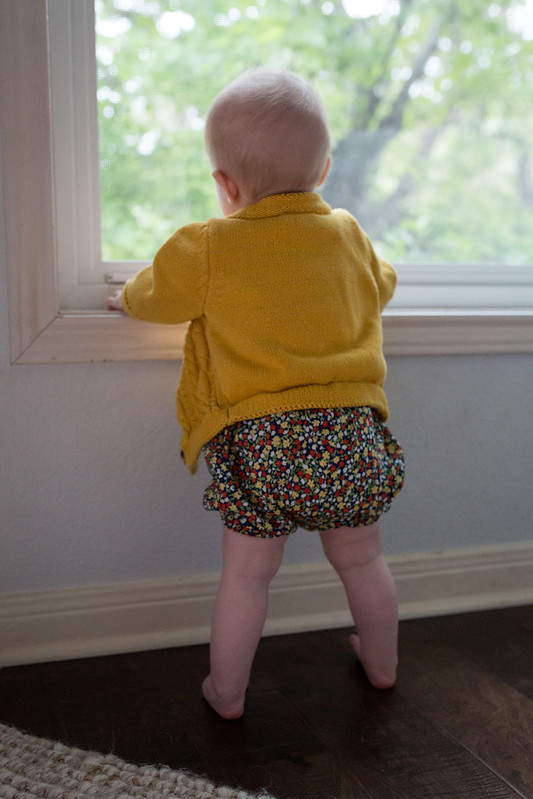 The fabric is a lawn by Robert Kaufman called London Calling that I bought from the Imagine Gnats shop.  It is such good stuff and reminds me of the Liberty fabric I worked with here, for a fraction of the cost. 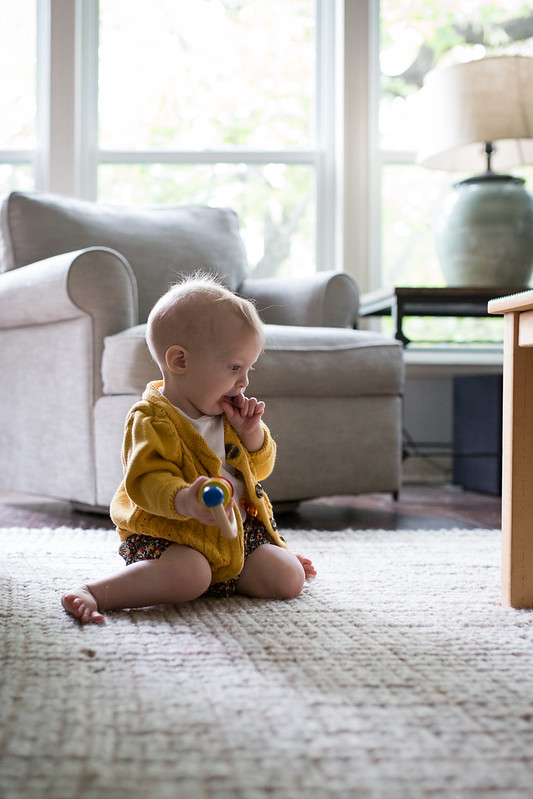 Hazel is one loved baby, I tell you.  Today Indigo kept repeating to her, "I couldn't love you anymore than I do."   And I know she speaks for all of us when she says that.