What better way to kick off a post about a Straightgrain pattern than to first address the pink elephant in the room. 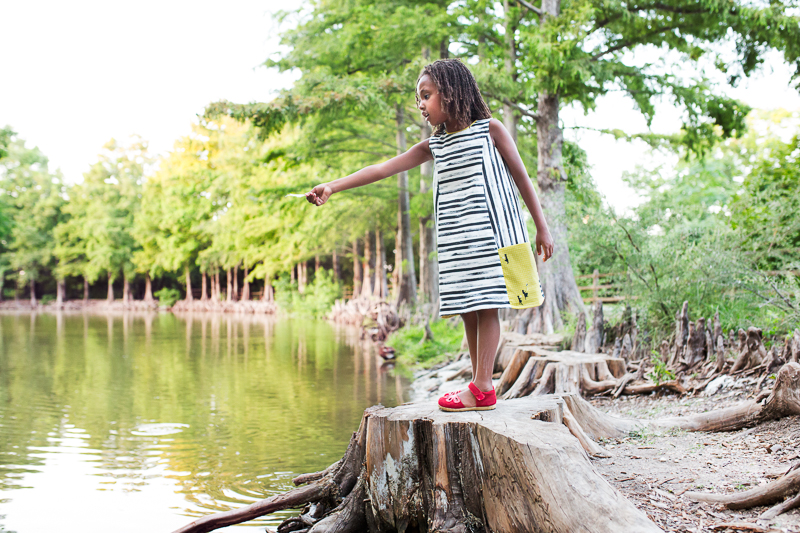 Oh, you know the one.  The one where I called one of my most beloved patterns, the Hanami dress, the Hanimi dress, for like.... years.  Yeah, that.  (Insert that emoji of the monkey covering her eyes.)  You guys were so gracious not to correct me.  It's like that awkward situation where you're not sure whether to tell your friend or co-worker that they have spinach in their teeth.  I get it.  I usually look the other way, too. 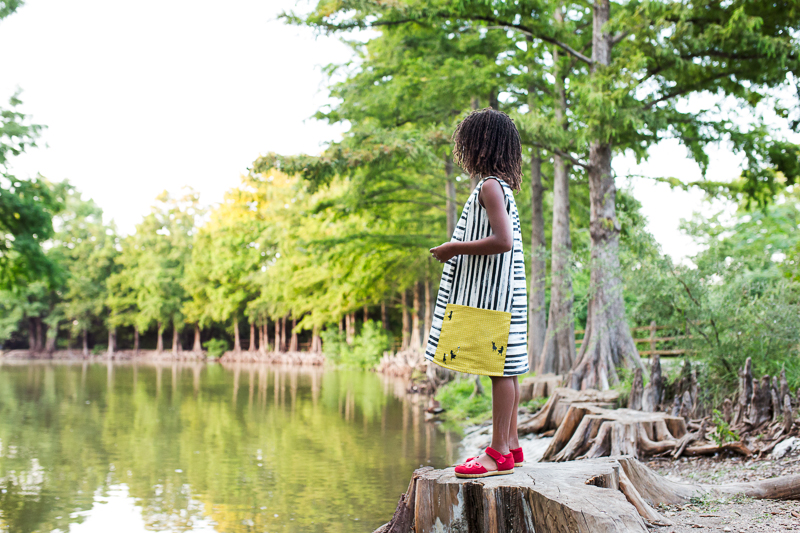 I'm actually a pretty detail-oriented person.  I was a finance major in college, so paying attention to the details was a necessity.  I'm also picky-picky when it comes to my sewing.  But I am the world's worst proof reader. I have no excuse or explanation. 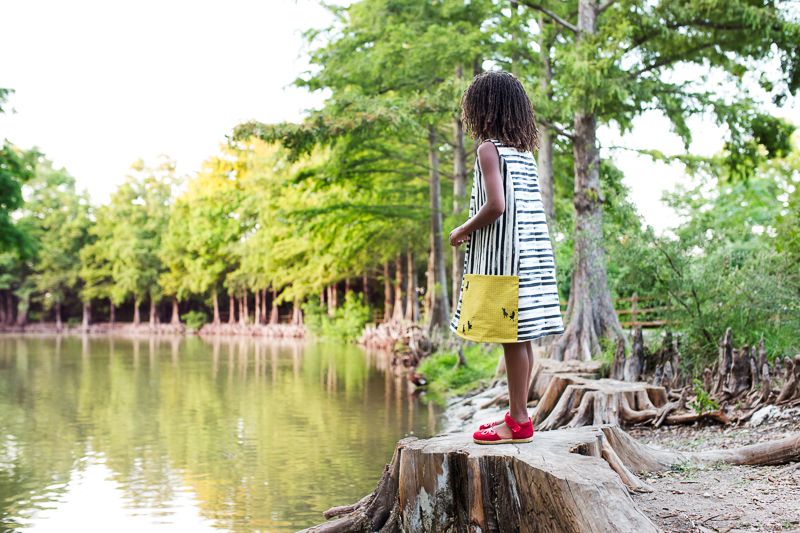 When An sent me the Hanami test pattern, I had a question about it and re-titled the email "the Hanimi pattern".  But somewhere along the way, I had forgotten I had re-titled it and thought the email came directly from An that way.  So every time I sewed the Hanami pattern, I retrieved the PDF from that original email.  And the rest is history. 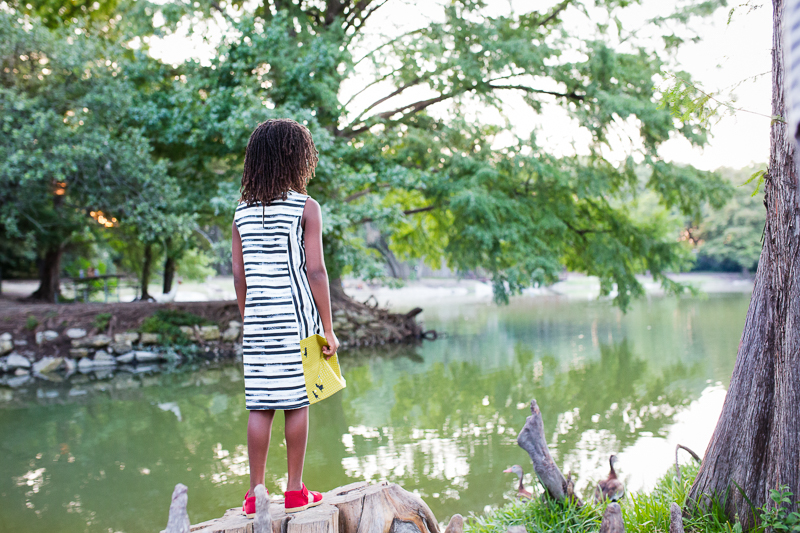 After all that, An was still gracious enough to share this pattern with me.  It's the Ishi dress but she said I could call it the Ashi dress.  ;) 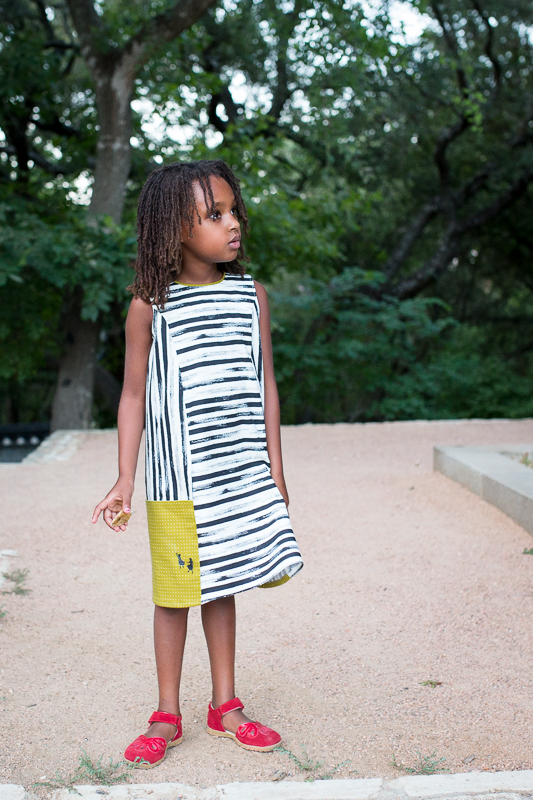 I had wanted to sew this dress from the moment I saw An's first test version. After she released the pattern, I knew I wanted to make it in Gust in Midnight and Breeze in Citron by Rashida Coleman-Hale for Cotton and Steel, but they hadn't been released yet.  So I pre-ordered them and waited. 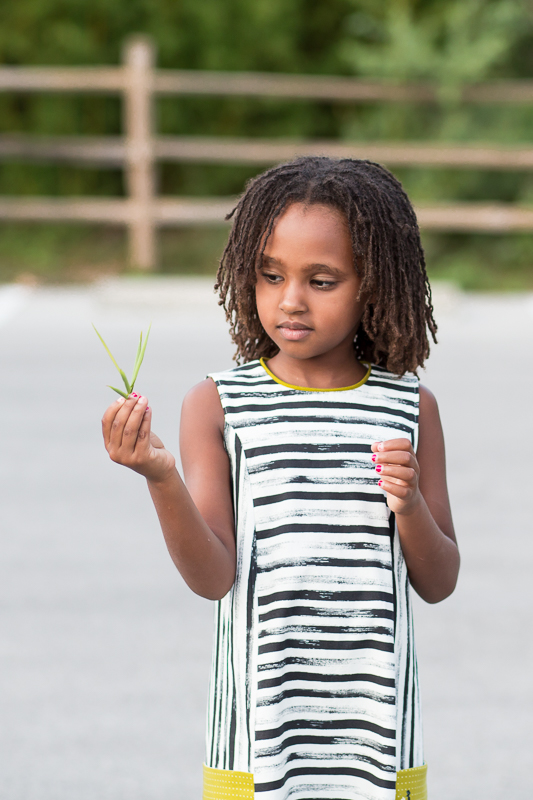 It finally arrived and I had some time to sew it up over the weekend.  Man, this is a quick one.   I sewed it in about 2 hours, while listening to podcasts from The Simple Show by Tsh from The Art of Simple.  It was fun and light and exactly what I needed. 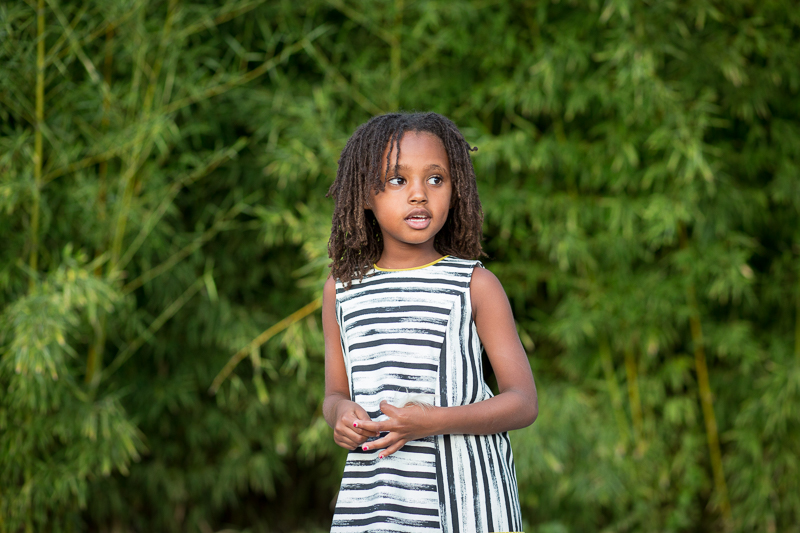 I did make a few modifications to the pattern.  I wanted this dress to be sleeveless, so I re-drafted the arm scythes to make them less deep (by 2 cm) and a little less wide at the shoulder (by about 1/4").  Then I finished them with bias binding. 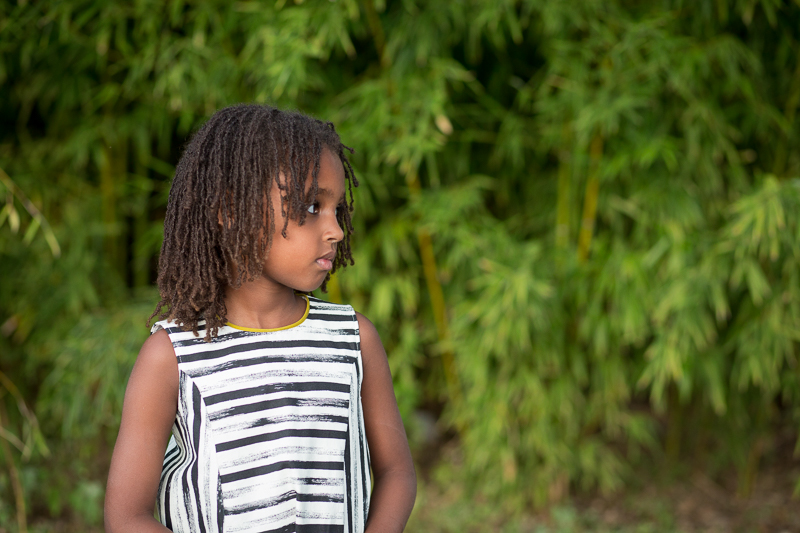 I finished the back with a single button, adding a button loop and sewing the lining to the dress, right sides together.   Super simple! 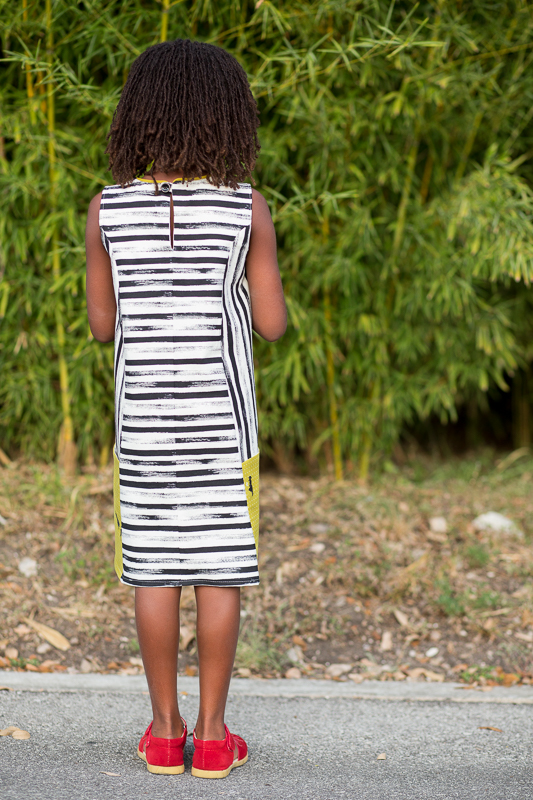 Tia could not wait for me to make this dress.  For one, she has a thing for zebras, so I had her at 'zebra dress'. 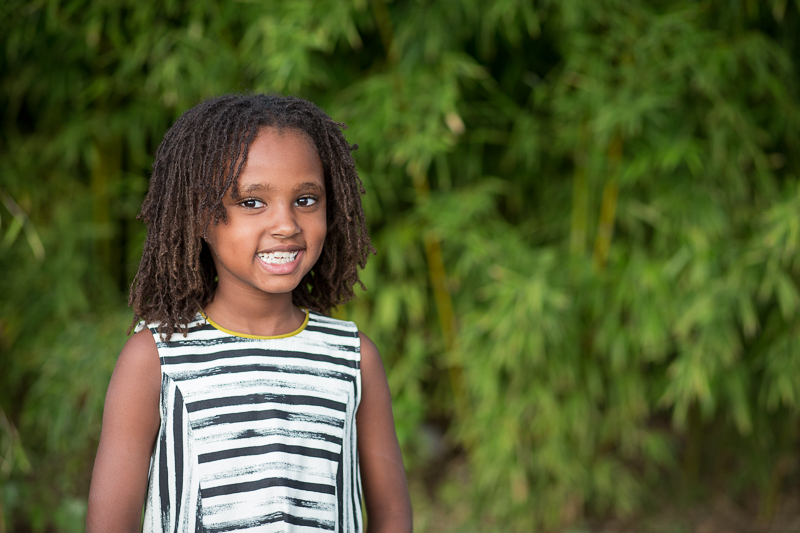 Secondly, she loves pockets and the bigger the better! 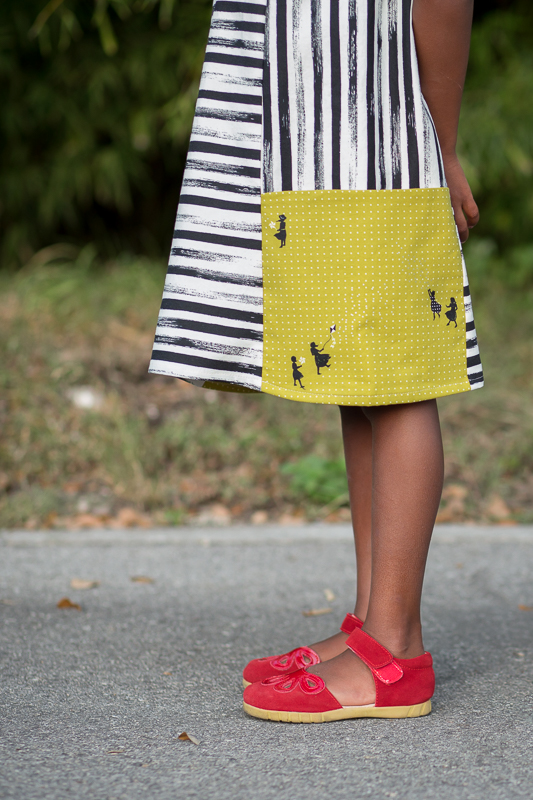 While I was taking these photos she kept loading them up with more and more things.  Feathers! Bamboo leaves!  Rocks! 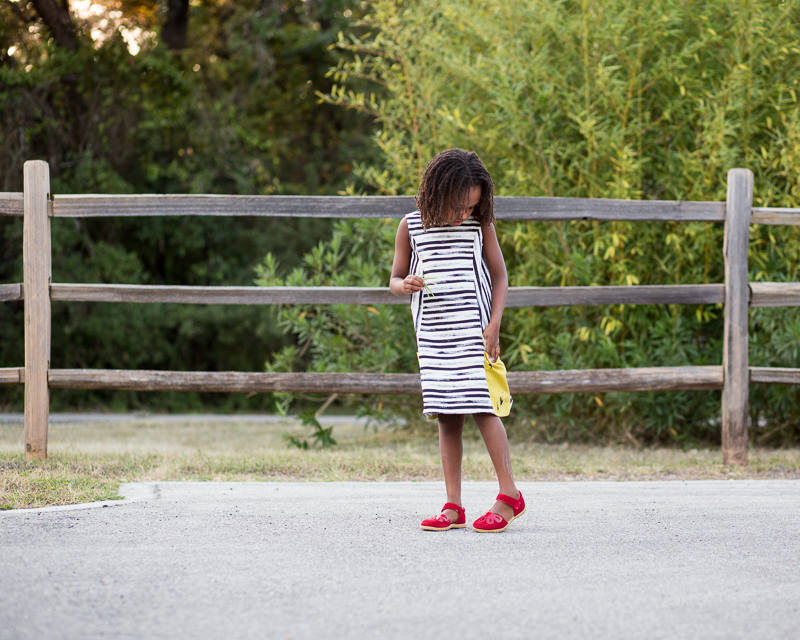 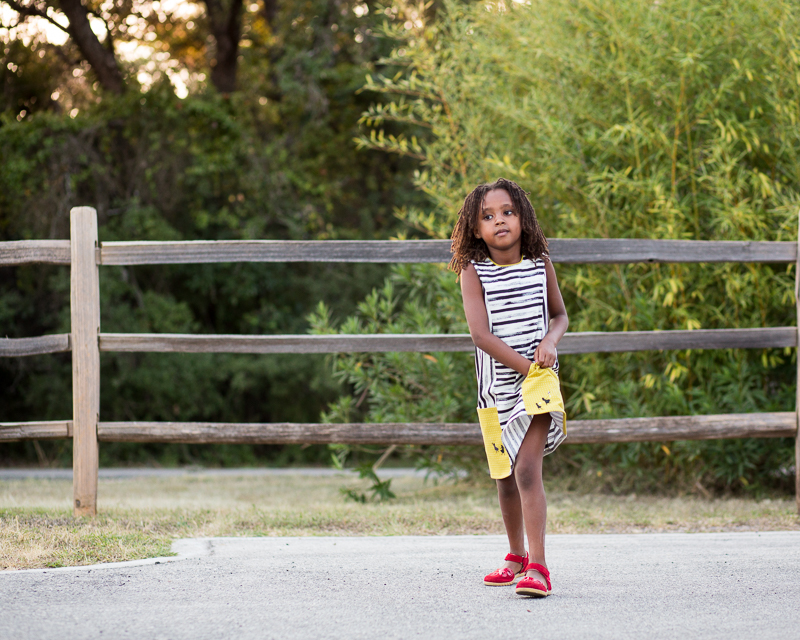 Then there's the pocket fabric.  She loved the little girls playing.  "They're Ethiopian girls," she said.  She also was crazy about the metallic flecks that the girls are throwing and that come off of the kite.  That was a detail I missed when looking at this fabric online.   But it makes it even more special and gives it a little more sparkle or glamour, which Tia loves. 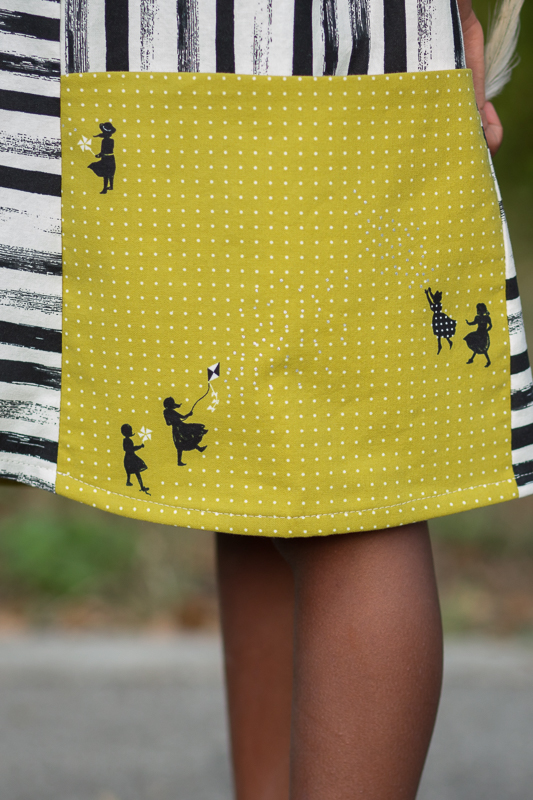 I took these photos at this really great duck pond near Dan's work.  There are always ducks roosting on their nests full of eggs, which the kids think is awesome.  But best of all, they love the baby ducklings.   Then there are turtles and full grown ducks all vying for the kids' bread (though on some days, they are overfed and a bit lazier.) 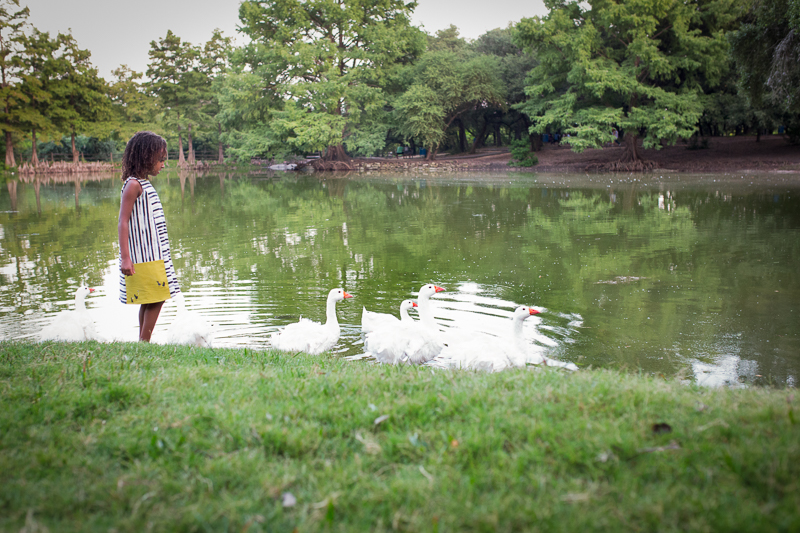 It's basically kid paradise and we love to hang out there as a family.  While we were there I took this photo of Jude as he was walking alongside of me. 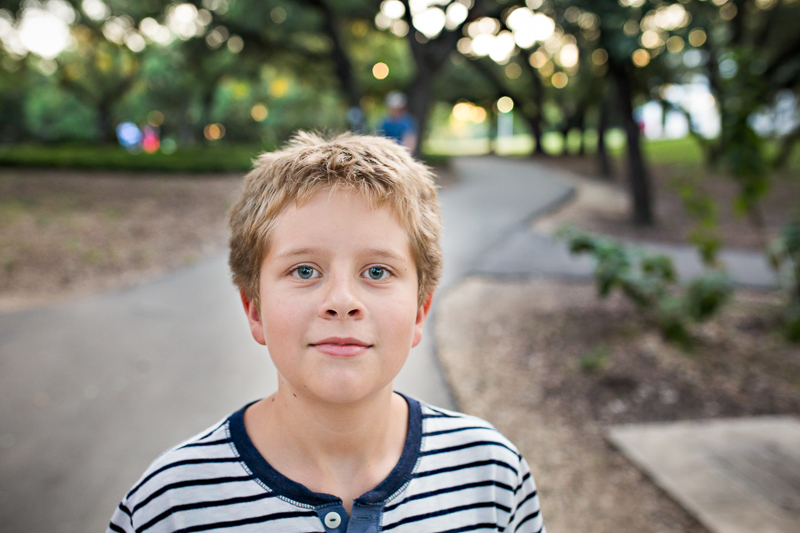 He's such an awesome kid. He's 10 1/2 now and it's funny how grown up he has always seemed to us as our oldest.   I remember how Dan and I were sitting at his kindergarten graduation, talking about how we couldn't believe how "big" he was already.  Now Tia is that age and she seems so little in comparison to her older siblings.  It's a curious thing how that works. 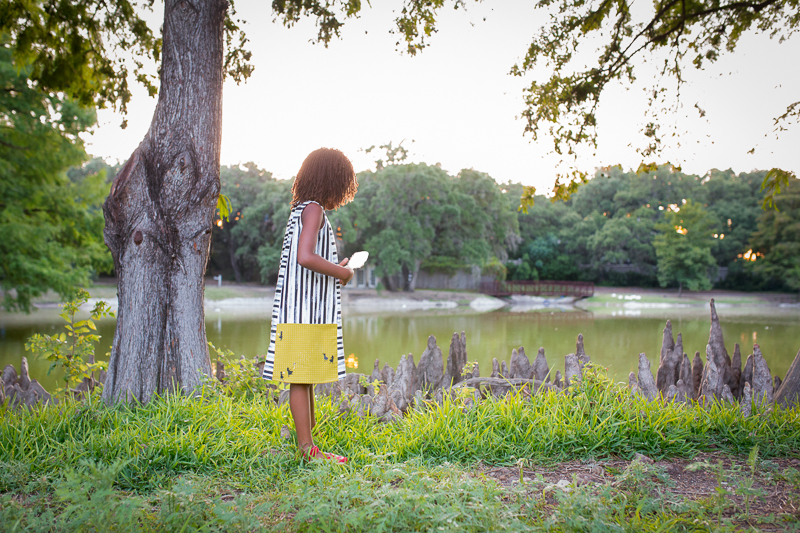 They're each at their own ages and stages, with the unique challenges and joys that go along with them.  And yet all five could agree that the duck pond was the best place to be on this particular evening and they couldn't have been happier about being there.  Especially Tia in her new zebra Ashi, I mean, Ishi dress.  ;)