When Your Favorite Hen is a He... and a Mini Briar Top

Four months ago, we became the proud owners of three baby chicks and embarked on the adventure of raising backyard chickens. 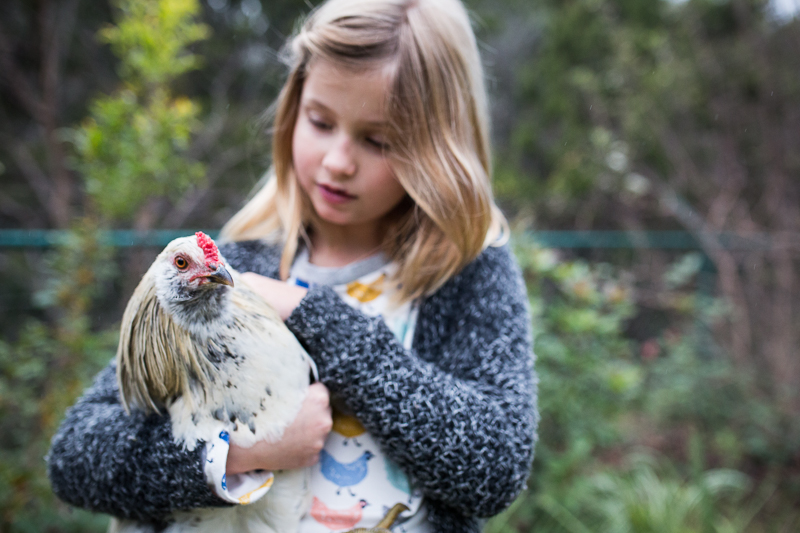 This has really been Indigo's project from the start.  She has been the one to feed them and give them water each day.  She lets them out of their coop in the morning and locks them in at night.  She brings them treats.  And she even does the dirty work of cleaning out the coop.  She does it with joy, without needing to be nagged or even reminded. 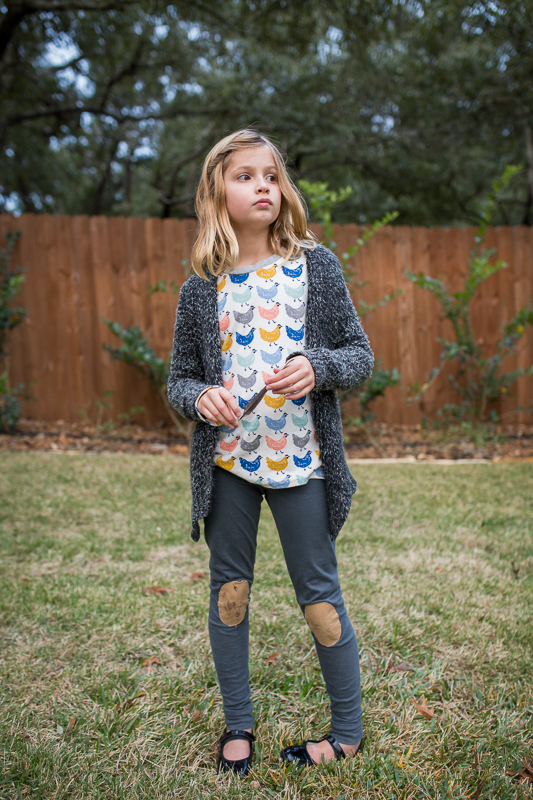 In caring for the chicks, she grew to love them deeply.  And her favorite is an Easter Egger named Heather.  Whenever Heather saw Indigo, she would call out in excitement.  Indigo would tell me, "Mom, Heather has been making some strange noises in the morning."  But whenever I went out to check it out, she was quiet. 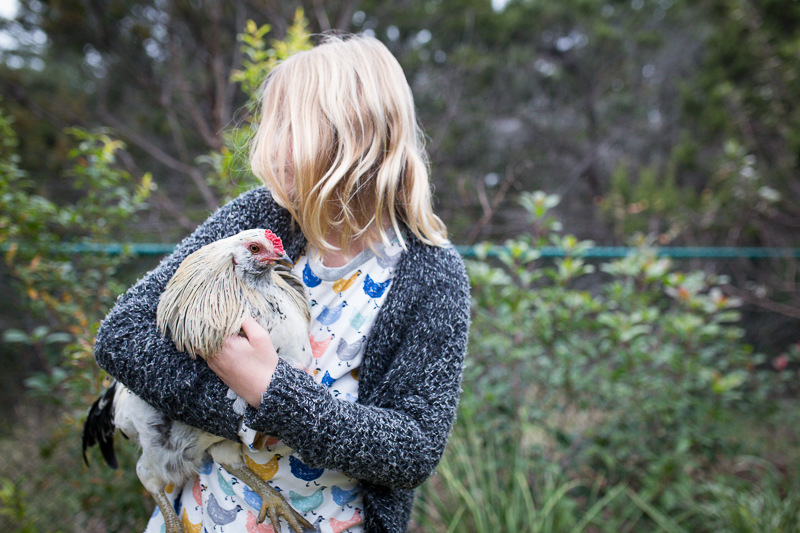 Heather started to grow bigger than the other chicks... but she was a different breed.  And then her tail feathers grew long and were shiny.  But maybe Easter Eggers are just fluffy?  (I don't know anything about chickens - I didn't grow up on a farm.)  So we had our suspicions that Heather might be a rooster... but we were kind of in denial. 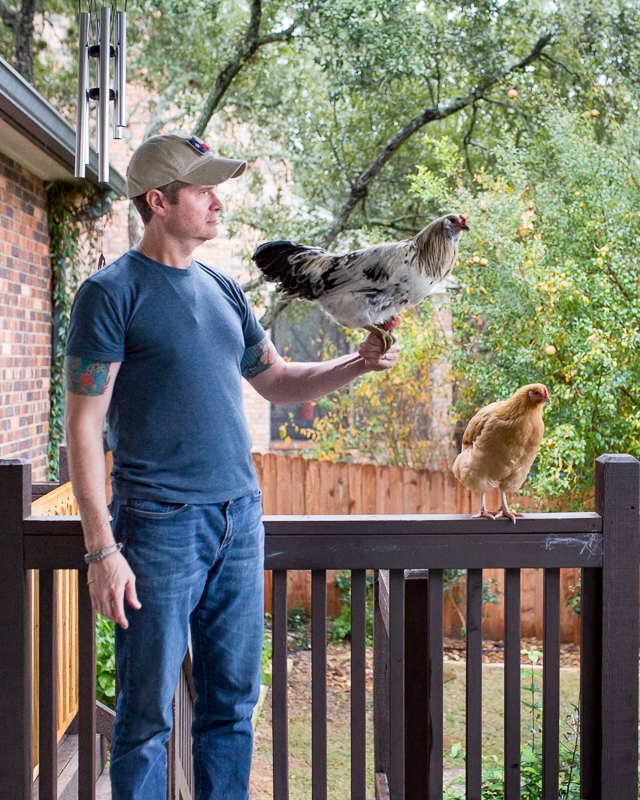 Until.  Last weekend, I was sleeping in one morning after being up late the night before.   In our main living area (where I usually am in the morning), we had our windows replaced because the original windows were old and so drafty.  Not only are the new windows airtight, but they are also incredibly sound proof.  They were expensive, however, so we did not replace the ones in our bedroom.  Indigo was headed out to let the chickens out and I was laying in bed when I heard it as clear as day :  Cock-a-doodle-dooooooo.  Then I heard it again.  And again.   I called Dan over and he heard it, too.  We looked at each other.  We definitely had a rooster. 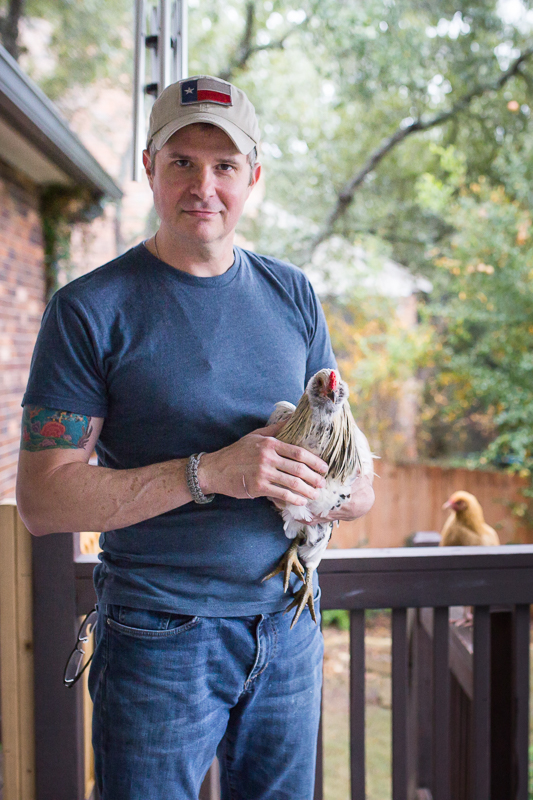 Big tears were shed that day by all of the kids, except for Tia, who tends to keep a stiff upper lip.  We knew we couldn't keep Heather (whose name has since been changed to Henry).  For one, roosters are not allowed in our city limits due to the loud crowing.  Apparently, people can and do eat fertilized eggs (who knew?).  But roosters really need to have at least 10 hens in their flock otherwise they harass and pick on the hens incessantly.  We only have two. 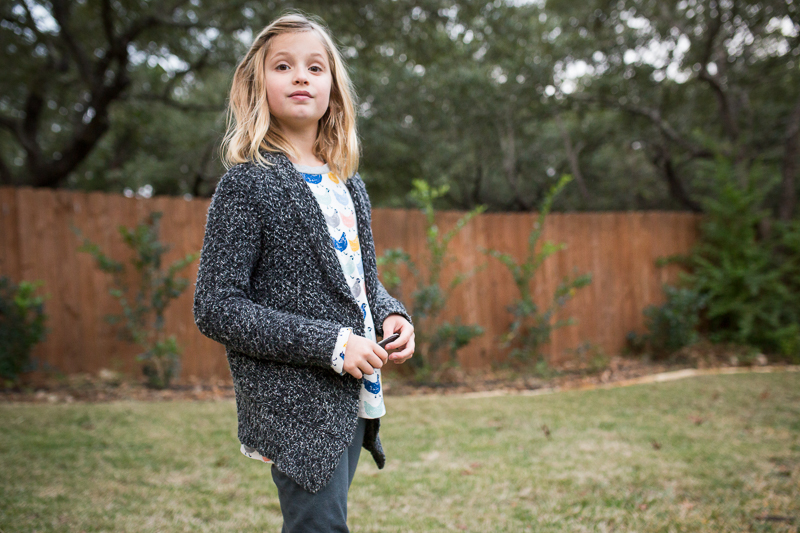 Thankfully, here in Texas there are quite a lot of farmers and ranchers.  Lots of people do it as a hobby.  Dan works with a man who raises pigs and whose kids are active in their local 4-H.  And he knows of someone who is looking for rooster for a flock of 20 hens.  I think our Henry boy will be in heaven there.

We took these photos of Indigo and Henry because he will be leaving soon and she said she wants to always remember him. 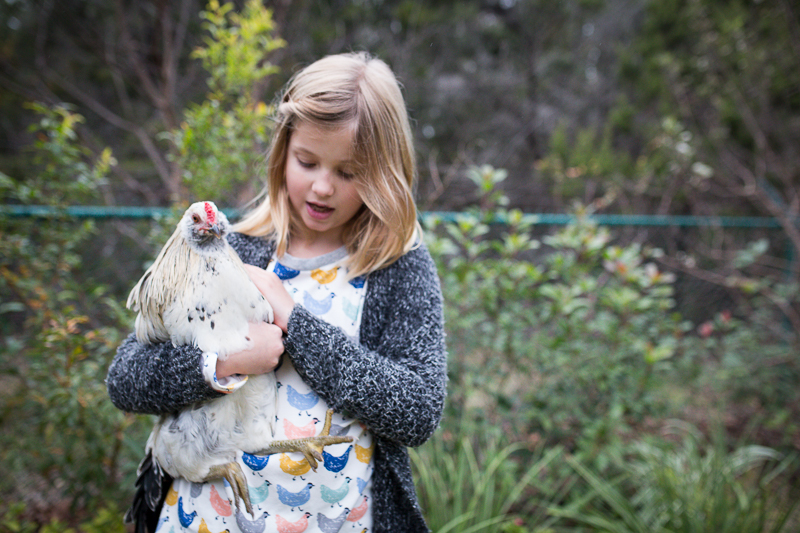 She's saving a few of his feathers, too. 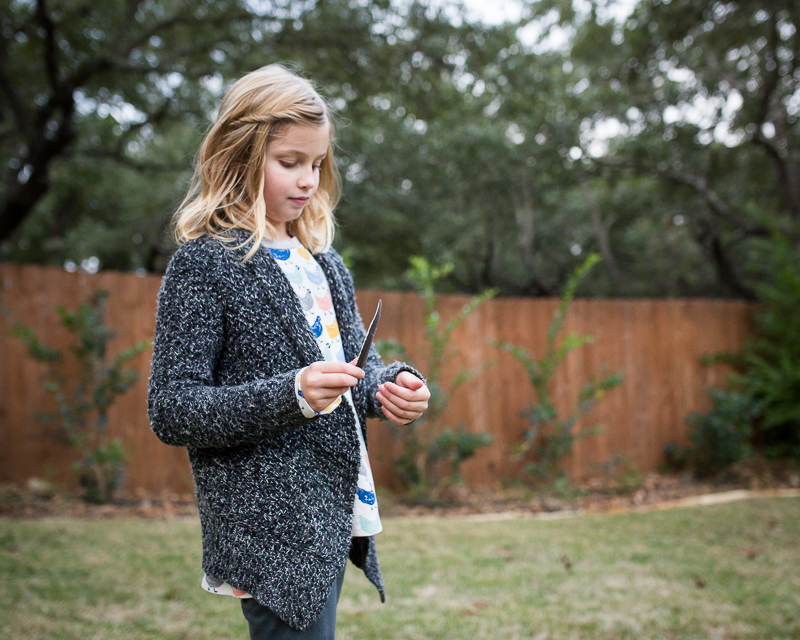 For Christmas, the only thing that Indigo wanted was a stuffed chicken and a blanket for it. 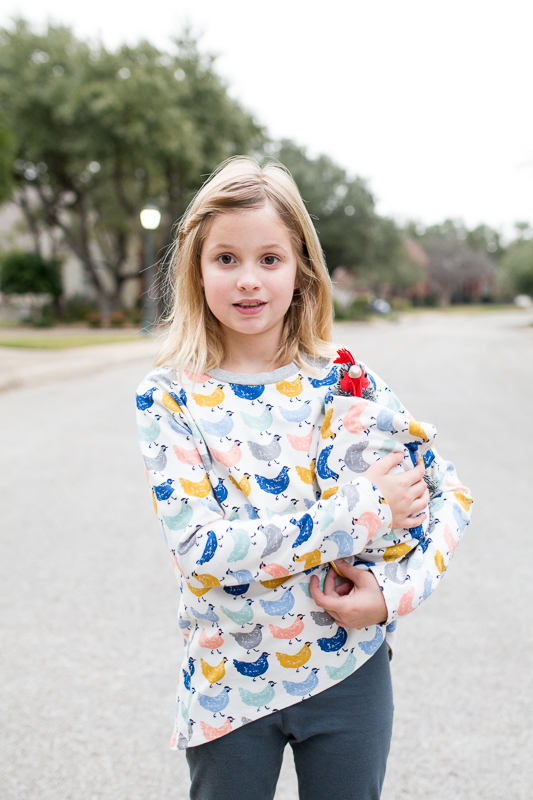 I was looking for some chicken fabric for the blanket when I found this knit interlock by Birch fabrics : Homestead Roost.  I decided to order enough to make Indigo another Mini Briar Top,  keeping it all a secret from her until Christmas.  Although I did spill to Jude who declared, "She's gonna freak out because she'll love it so much!" 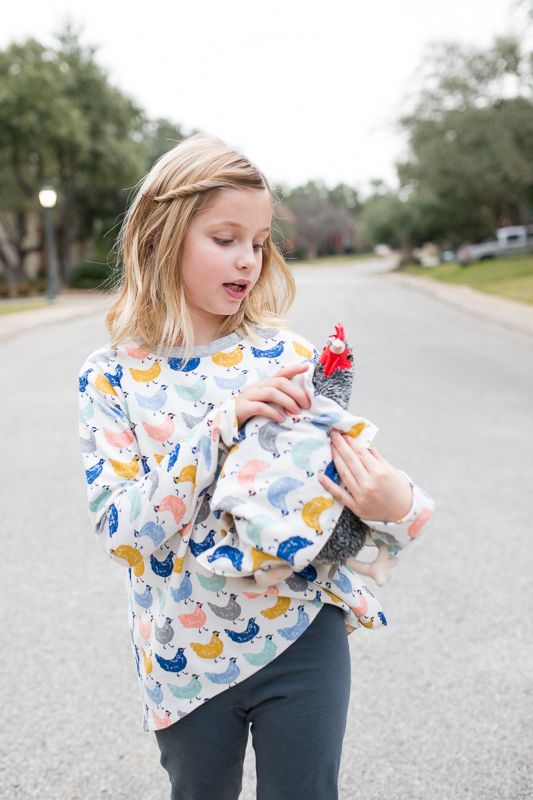 I found a super soft mustard knit that I had in my stash to use as a backing for the blanket. 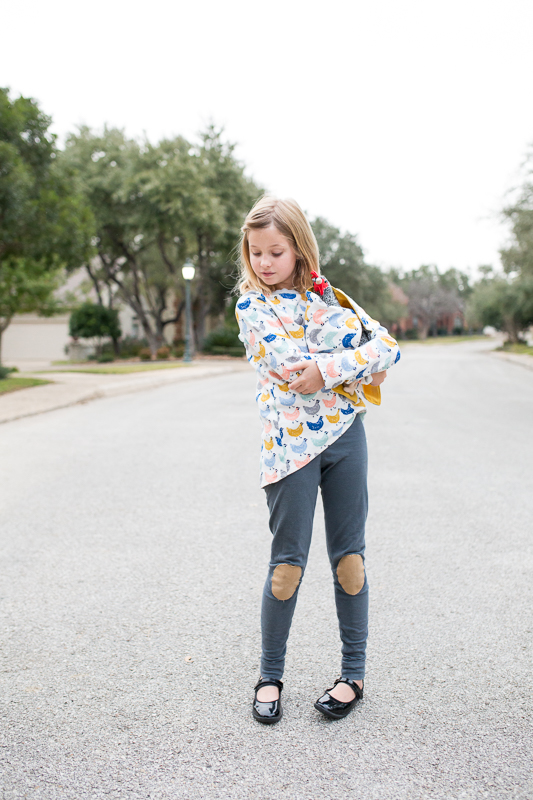 I was really hoping she wouldn't find it to be too babyish.  And I told her I wouldn't take it personally if she wanted to wear it as pajamas.  But she loved it!  One really cool and interesting thing about Indigo is that she truly loves and values handmade. 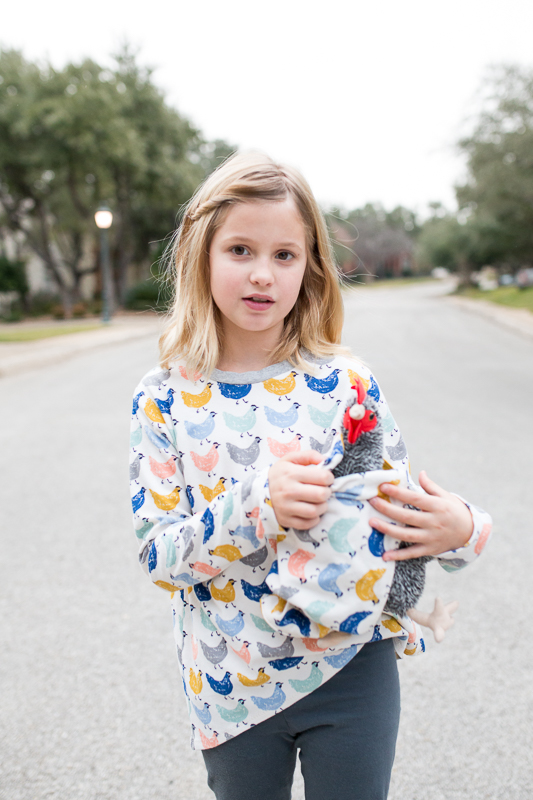 I am so thankful for our chicken girl and her amazingly big heart! 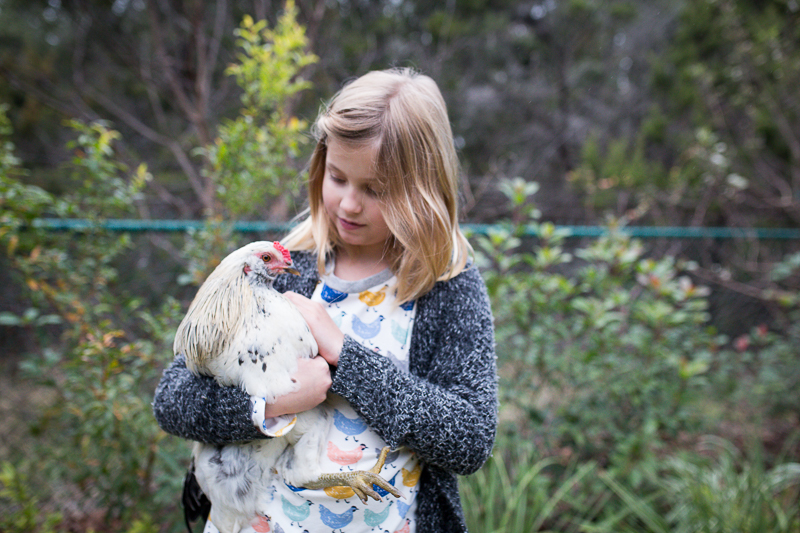