This morning I was making blueberry pancakes using frozen blueberries. The kids were eating the blueberries out of the bag while I was mixing the batter. Indi said, "YUM! It's like eating little bits of sugar!" 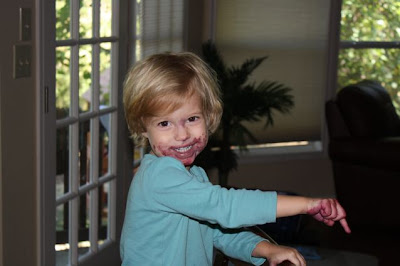 She enjoyed them, indeed.

When I started garment sewing back in May, I had my eye on this Oliver + S Bubble Dress pattern. But it was rated as "2 out of 4 scissors" for difficulty, so I wanted to get some practice before making it. Also, I knew I wanted to use Heather Ross' Far, Far Away fabric. It's double gauze so it's pricey. I only wanted to buy one yard and I only wanted to make this dress ONCE.

To my surprise, the dress sewed up quickly and easily. I made it in one evening. And when I say "evening" I mean it. There was no late night sewing on this project. It's fully lined (I used cotton muslin). 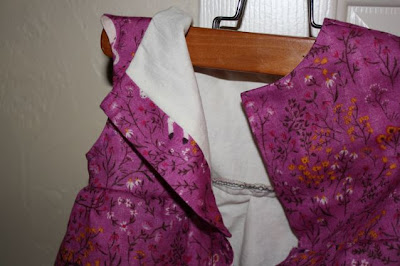 I really love this dress. Maybe the bubble dress will be the first dress I make for the new baby. What do you think? 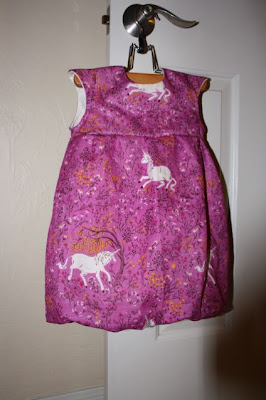 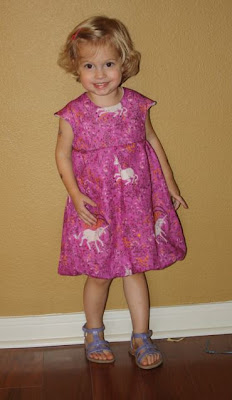 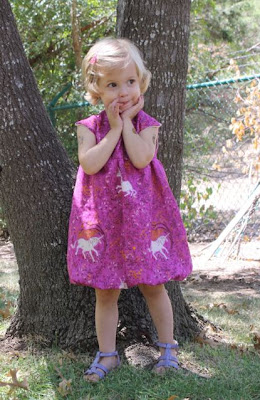 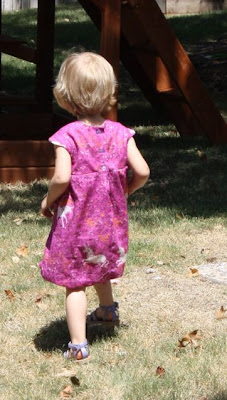 When I am working on a sewing project, there is nothing like a quiet house (which is why I do a lot of late night sewing!) where I can listen to something I enjoy. Lately, I have been listening to one of two things: pandora or blackhawk church's sermons.

Pandora is an awesome resource for finding new music. My sister told me about it a couple of years ago, but I had forgotten about it. Then I read something about it on the blog, Angry Chicken. It rocks (no pun intended -- haha)! My favorite station is New Age Pop, which I consider to be a misnomer. Why is piano music or chill rock considered "new age"? This station features pianists like George Winston, Jim Brickman, and Lorie Line. Then there's lots of Norah Jones-style folky pop. I'm lovin' it.
I also love listening to Blackhawk Church's sermons. They are so inspiring. I always feel like I learn so much from them. They're currently in the middle of a 16 week series on the Sermon on the Mount. Amazing. Powerful. Challenging. Transformative. Check it out.
Finally, I will close with a Jude-ism.
Yesterday Jude was asking me where meat comes from. The conversation went something like this:
Me: It comes from cows.
Jude: Hmmm, I didn't know that cows laid meat.
Me: Well, they don't lay meat, honey. The cows ARE the meat.
Jude: (GASP!) But Ga-Ga doesn't eat her cows... does she?
Me: Gaga mostly raises cows for breeding, but, yes, they sometimes do eat their cows.
Jude: (Look of horror) But, mommy, that is WRONG!! Isn't it wrong? It's so bad!
Me: Well, we try to buy meat from farmers where we know the cows had a good life. It's fast, honey. They don't suffer.
Jude: (Still aghast) Gross.
I think we might have a budding vegetarian on our hands.