I wanted to start documenting our trip and I thought I would start at the airport. The airport seems pretty ho-hum but we had some cool things happen at the airport, which I will get to momentarily.
First, I wanted to write a brief update on our family. My cousin Kayla came down yesterday and, let me tell you, that girl has been a LIFE SAVER. My sister left on Saturday, my mom on Sunday. They were so helpful to us; playing with the kids, cleaning, cooking and doing laundry. When they left, I felt quite overwhelmed frankly. Coming back from Ethiopia has felt a lot like birth. I feel like I got hit by a truck! Like a newborn, the baby was up most of the night the first few nights. The difference is that you don't have the sympathy of the outside world, since your body didn't go through pregnancy and birth. It kind of feels like everyone just expects it to be business as usual. Or it could be my sleep-deprived brain perceiving it that way... I include this not to try to drum up sympathy but to raise awareness that adoptive families need support, too! We have been fortunate to have family here to help!
Jude has been doing great with the transition, but Indigo has been having a little more trouble. She was so in love with baby Violet and so excited about baby Evangeline that I thought she would be in heaven. She's going through some typical regression stuff - extra sensitive, wanting to suck on the pacifier we bought for Evie, asking me to carry her a lot, wanting me to change her clothes, her diaper. This is all coming from the previously independent, "I can do it myself" girl. I am sure she will work through this all in time.
Then yesterday Jude barfed in the car as we were on the way to the airport to pick up Kayla. That was after having diarrhea and complaining of stomach pain most of the day.
Can I repeat that we are so happy to have Kayla here?
I'm not trying to complain, just keepin' it real. We are so happy to have Evie home and there is such peace and contentment in having completed our adoption. So this transition phase is to be expected.
Now, on to the airport stories!
We had a long layover in Houston on the 18th. Dan was making phone calls trying to sort out our Embassy mess. I got a text from my friend Heather, who had been in Mexico, saying that she was around and that I could call her if I wanted. I called and mentioned I was in Houston. She responded that she was, too! She was on a layover from her trip to Mexico. Heather is one of my dearest friends but she lives in Madison, WI, so I hadn't seen her since last summer. Lo and behold, we were soon having lunch together in the Houston airport! It was an incredible way to start our journey to Ethiopia 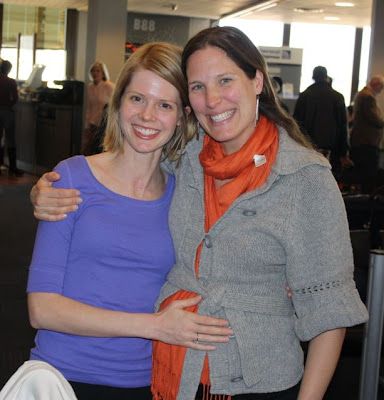 Check out Heather's perfect baby bump! She looked absolutely radiant!
We had a nine hour flight from Houston to Frankfurt. When we got to our gate at the Frankfurt airport, we saw a team of Compassion International folks headed to Ethiopia. They were all wearing Compassion name tags and one was carrying quite possibly the largest cameras I have ever seen. I love Compassion, we sponsor a child through their org and we also adore their magazine! So, me, being the Chatty Cathy that I am, struck up a conversation with them, telling them that I am a huge Compassion fan. We talked all things Compassion for awhile and then they asked why we were going to Ethiopia. I shared that we were adopting Evangeline. Dan was on the phone, again, trying to sort out our Embassy mess. I motioned toward Dan, pointing out that he was my husband, but that he was working on our Embassy disaster. They asked me if I wanted them to pray about it. I of course said YES! and then they asked if I wanted to pray right then and there. So we did, right at our gate in the Frankfurt airport. They recorded it as a part of their travel DVD.
When we got news that everything was going to work out with the Embassy, I thought of those kind people from Compassion and how I wished that they could know that we were bringing Evie home.
Fast-forward to Feb 25th. We were at the airport getting ready to leave Ethiopia. I was holding Evie in my arms when I was approached by one of the Compassion guys! They were there, too! They got to meet Evie and were overjoyed that we were bringing her home - an answer to prayer. We asked to take a picture of them, to share the story on our blog. They agreed. 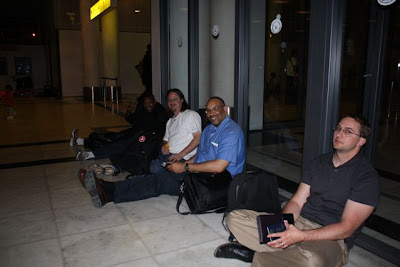 Evie had fallen asleep in my arms. We laid her in our carry on bag, because our flight had been canceled and we had a 5 hour wait ahead of us at the airport. The guys at Compassion took a picture of her like this, to document our answered prayer. 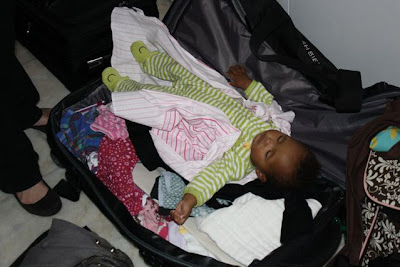