A couple of months ago I sewed this monster tooth pillow for Jude who had one very wiggly tooth.  Later I made one for the daughter of Evie's wonderful (former) speech therapist and one for an adoption pal. 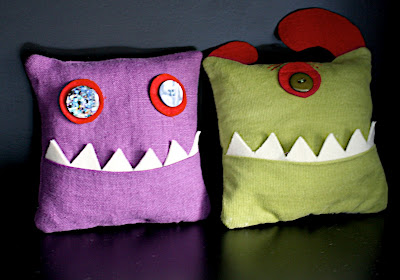 Our speech therapist said her daughter's favorite color was purple.  I added the sparkly eye button because Indigo was obsessed with them.  I hoped it'd be a hit with her little girl, too.

For the second pillow, I was bored by the idea of making another one so much the same.  So I brainstormed with the kids and gave him only one eye and two horns. 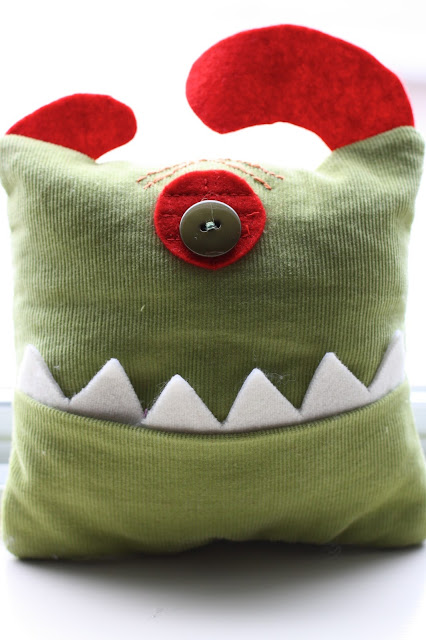 I also added a bit of hand embroidery for a double eyebrow. 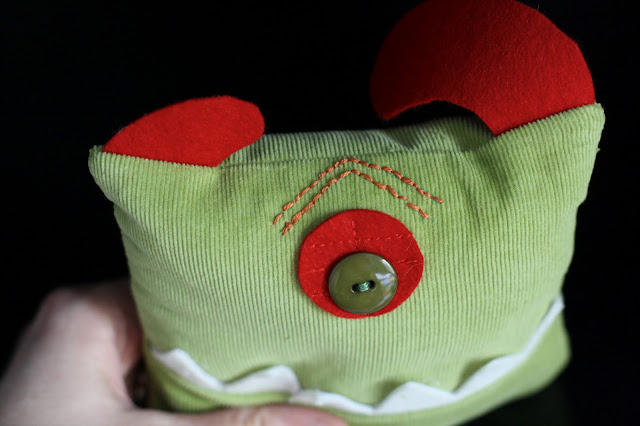 I fell in love with this little guy.  I had to hold myself back from making a few more.  There are so many possibilities!  A girlish one with a bow and puckered lips.  Or maybe a monster with a pirate patch?  Or a mustache!

I would make one change to this pillow tutorial.  The instructions tell you to leave an opening at the bottom for turning, which you hand-stitch closed later.  I found my hand stitching didn't catch the fabric inside the mouth of the pillow.   Jude was in tears, believing his first tooth was forever lost in the "stuff and fluff."  Surely, the tooth fairy would never be able to find it.   She's a magic fairy, Jude.  She'll find it, I assured.  Luckily we did find his tooth.  Though, to avoid this scenario, I'd recommend leaving the opening on the side of the monster pillow, above the monster's mouth.  Or the top of the pillow would be a-ok, too.